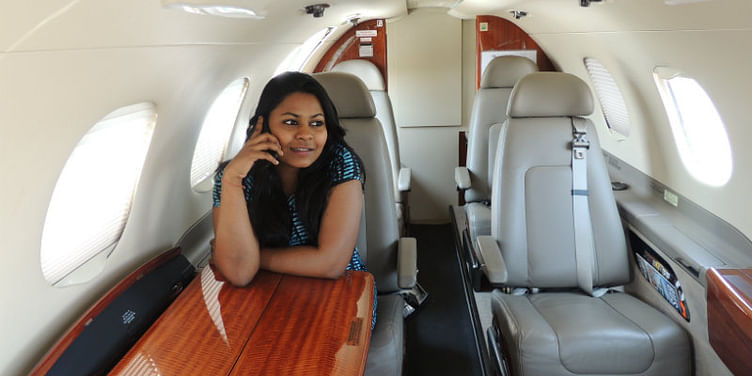 The Delhi-based entrepreneur runs JetSetGo, the ‘Uber of the skies’, a plane aggregator that operates, manages, and flies planes for owners.

Wake up in Delhi, board an air taxi for a half-hour marketing meeting across the city, reach London in record time for an important lunch meeting, surprise your girlfriend in Shanghai by taking her on a sunset date, and reach home in time for dinner with your mum.

Sounds rather ambitious — far-fetched, even? Not at all. The truth is, 21st-century travel is also all about conducting business and managing relationships across continents. Premium air travel may seem a privilege, but if you have the money, there’s nothing that can stop you from globetrotting.

Flying high in the private jet and helicopter market is Delhi-based JetSetGo, founded by Kanika Tekriwal, who calls her company ‘the Uber of the skies’. JetSetGo is a plane aggregator that manages, operates, and flies planes for plane owners. At the same time, it lets customers charter aircraft and provides, among others, cloud-based scheduling, aircraft management, and advanced trip-pricing capabilities with an inbuilt marketplace for services and parts.

The 28-year-old hails from a Marwari business family with “entrepreneurship in her blood,” and knew from a very young age that she would be running a business of her own at some point in her life.

The idea for JetSetGo came up because Kanika sensed a need for an aggregator in the private jet space. “I would meet a number of people using private jets who complained that booking one in India was a very shoddy experience and they felt cheated that the entire private jet experience is a far cry from travelling business or first. At the same time, private jet owners were selling planes due to the escalating costs, regular maintenance, and other hindrances as well as not getting the real pleasure of actually owning an aircraft. The determination for JetSetGo came up in a conversation I had with a colleague in the UK. I narrated an idea that I had about setting up a thriving aviation company, born in India. It was not aimed at making my colleague laugh out loud, but that’s what happened. Being Indian and adamant, I was determined to prove him, and everybody else that thought along the same lines, wrong,” she says.

She started JetSetGo in 2014 with the aim to cater to a wide clientele — business owners who had to cover three to four cities in a day, inbound and outbound tourists, emergency evacuations, or tourists on a pilgrimage to remote areas.

“Their need partly arose from a very crucial fact about Indian aviation: India has 200 airports and airstrips that are fully functional, but only 80 of them are connected by commercial airlines. Unfortunately, then, a majority of private aircraft in India did not serve their full potential because of the lack of a structured system that allows owners to be part of the private aviation business. JetSetGo is a solution to all these inadequacies and roadblocks,” she shares.

According to Kanika, the company is yet to face its toughest moment. “Every day you wake up with 100 new problems and go to sleep having solved 50 of them. What seemed difficult a year ago is now a joke and gets done in a jiffy. Similarly, every small and big victory is my biggest success, getting excellent feedback from a customer is success, getting a plane repaired before target time is success, having a happy time is a success, showing 7X growth with excellent EBIDTA is success, just building JetSetGo the way we are is success.”

“I started out with only $100 in my pocket and worked my way up from there. I was very lucky to have had a network of individuals who had faith in me, and they gave us steady demand for a few months. Thankfully, we never had to go out and look for funding — it always came to us on its own. Customers turned into investors wanting to be part of the story. The company now has a team of 70 employees, who manages, and operates privately owned aircraft that double up as our fleet.”

Women on the rise

“I’ve definitely received far too many backhanded compliments and prejudiced comments that have all implied that I don’t belong in this space. The intensity of the corporate world’s glass ceiling first hit me when I was in a boardroom filled with over 100 men. I was, to my surprise, the only woman in the room. When I spoke, the men did feel intimidated. Another example would be how someone in the leadership position of an association I am a part of constantly chooses to overlook and ignore me, addressing me with strange names such as ‘kid’ because he just can’t accept the fact that a girl can be a part of this all-boys club.”

Traversing the entrepreneurial journey has also been about recognising and learning more about the sexism that exists in the industry and working towards mitigating archaic ideologies.

“As a country, we have to include more women in top-level positions and recognise the impact they can have on our economy. That won’t happen unless the decision-makers in our country’s biggest firms put effective bias-abating procedures into place,” she says.

Kanika admits that a critical challenge that confronts every industry in India is the lack of gender equality.

“It’s almost as if some of these firms never grew out of the 1960s (I can imagine Don Draper walking out of one of these infamous office spaces). Secondly, there exists a dearth of women in decision-making positions. When the individuals at the top — who are mostly men — call the shots, there is a likelihood that the first CVs to be chucked in the bin all belong to women, for numerous reasons. Lastly, women lack the resources, training, and mentorship necessary to truly make it and survive in the corporate world.”

This is exactly what she wants to do right at JetSetGo. “We practise gender equality through strict rules and regulations separate to national legislation. For us, it’s not just about the superficial, squeaky clean brand image — it’s about real, actionable change. So whether it’s equal remuneration for equal work or the removal of barriers that inhibit the participation of women in the workplace, we ensure that our spaces are inclusive, inviting, and intellectually stimulating. We are also incredibly proud to be the first aviation company ever to ensure that a female pilot is on board all of our flights,” she says.

When asked what her plans for the future are, she sums it up in just two words — “world domination.”

Surely, the sky’s the limit for this enterprising entrepreneur.