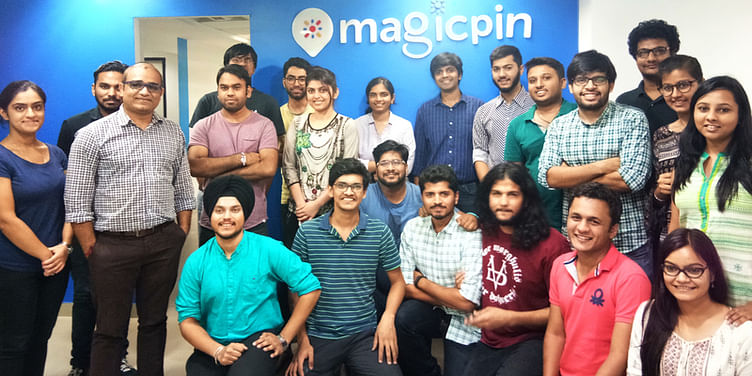 It was two years ago that Anshoo Sharma, an investor at LightSpeed Venture Partners, and Brij Bhushan, an investor at Nexus Ventures, decided to start up. The duo was keen to focus on the offline world, and build a company that would transform the offline retail world with technology.

That was the genesis of Magicpin, a platform that connects consumers and local businesses, helping the latter gain repeat customers.

“We initially started the platform on WhatsApp, but knew that we had to build a strong technology layer. But initially, we wanted to understand the needs and help retailers connect with their consumers. With time, we built a strong tech layer and now have a 20-person-strong technology team,” Anshoo says.

As of now, Magicpin has raised $10 million in funding, and has investors like LightSpeed India Partners, Waterbridge Ventures, two global family offices, and angel investors like Srivatsan Rajan, Chairman, Bain and Co India; and Sahil Barua, CEO, Delhivery. Of the $10 million, $7 million was raised in May this year.

Taking the user experience a layer deeper at retail outlets, Magicpin announced Quests, backed by Augmented Reality (AR), at TiE Delhi. As the name suggests, with Quests, users can take “quests” on the app. These could range from finding flying beer mugs, to dancing burgers, all of this in the AR space within the merchant’s premises.

On completing the quests, users get instant voucher codes that can be exchanged for real goodies at the store counter. Jeremy Liew, partner at Lightspeed Venture Partners, who is also the first investor in Snapchat commented on the launch:

“AR should be about fun. Snapchat introduced AR to the world with lenses, helping people send funny selfies to their friends. Pokemon Go built a fun game around AR that got them out and about in the real world. Now magicpin is incorporating AR into a fun treasure hunt dynamic to help users discover new products and places in the real world.”

Anshoo believes that with AR, you are giving the customer a detailed visual of the retail outlet, which she or he can touch and feel, and that gives them more opportunities to return. A user’s quest experience at the store becomes a video that goes on to his or her feed on Magicpin and Facebook (when logged in), and creates a social buzz about the experience that also captures stores in the background.

“There is limited inventory refreshed every day at partner stores for consumption through AR. Our partners are really excited about being able to use AR to engage their customers,” Anshoo says.

The team at Magicpin believes that transforming the offline world with technology is important.

“WhiIe I was at LightSpeed, we would look at this side of the market closely. This was around 2015, when the market was at a high. I happened to visit China with a small investor delegation and understood how the market had evolved, how retail businesses were transforming, thanks to technology. That is when I had two choices - either be a part of it as an investor or build something that I could call my own,” he says.

When Anshoo went to China two years ago, two local startups, Dianping and Meituan, had each raised $1 billion. These later merged operations, and the combined entity raised $3.3 billion in 2016.

Anshoo was inspired by these two startups when he decided to start out on his own.

Brij, who had worked with Anshoo at Bain, had strong operations experience. When Anshoo discussed the idea, Brij knew he had to work on Magicpin.

The platform uses location intelligence to give users information, recommendations and rewards on different retail experiences. Magicpin then provides merchants with consumer data and a dedicated marketing platform to help and encourage repeat buying.

Users typically share their experiences across different categories like restaurants, fashion, and beauty through pictures that surface in other user’s feeds, inspiring them to discover and try these experiences, with the added benefit of rewards for spending at participating merchants.

The Magicpin app also makes personalised recommendations to its users, based on his or her consumption pattern and/or that of similar users on the network.

“Most of these users fall under the influencer category, opening their reach to a larger audience,” Anshoo says.

“The biggest thing retailers look for is repeat customers. They also want to understand what the customer needs. Magicpin gives them that insight. On an average, customers spend 30 minutes on our app, and 70 minutes on the top segment; this gives us enough data and insights,” Anshoo says.

The space and growth

Magicpin has the ability to tell outlets how different customers behave in their outlets, the different kind of products they can purchase, the time they spend and days they come in.

The team initially started out with the food and beverages segment.

“When we started with McDonald’s, they gave us four outlets. In two years, we are with McDonald's in the south and west regions. We are present in all metro cities,” Anshoo says. Some of Magicpin’s other clients include Taco Bell, Beer Cafe, and Hard Rock Cafe.

In the social media variation of the platform, users have the ability to engage with others through recommendations, check-ins into various outlets and live feeds.

Magicpin has survived the winter of 2016; Anshoo says they were able to do so by focusing purely on building a strong technology.

One of the biggest platforms for deals discovery is Groupon, which raised close to $700 million in 2011. In India, there are Nearbuy and Littleapp, which have been acquired by Paytm. Others operating in the space include Mydala and CouponDunia.

As of May, Magicpin claims to have grown over seven times in 12 months with a reach of $40 million in annual business (which it drives to its merchant base), today that number is at $100 million gross merchandise value (GMV). It has more than a million users who have shared more than five million experiences and are highly active on the app.