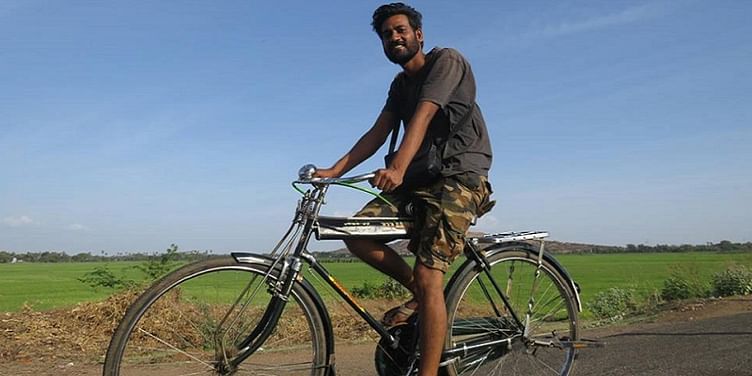 Having met 52 grassroot innovators and sustainability heroes in 52 weeks, Rahul Karanpuriya shares with us the hardships and learnings from his rather transformative journey.

Even when he was young, Rahul Karanpuriya had challenged conventions around modern-day education system and questioned the stereotypes it propounded. Disillusioned by the limited career choices that present-day rote learning methods offer, the 30-year-old had set out on a journey last year identifying, meeting and documenting the lives of 52 innovators who, through their alternative eco-career choices, are contributing towards ensuring a greener planet.

"While doing my MBA in Jaipur, I was continuously bothered with a range of cynical questions that questioned the credibility of the Indian education system".

I thought our predictable curriculums were only preparing labour slaves for mainstream industries, says Rahul, explaining how he walked out of his MBA course mid-way.

Having a seen of lot of students from rural belts struggling to pay off their education loans, Rahul probed into the purpose of contemporary educational methods. “Even after studying over two decades, students have to choose from a list of narrow academic disciplines. Often, these are completely detached from local knowledge and cultural roots. This is where exploring sustainable, alternative careers becomes important,” says Rahul, who took gap years to explore self-designed learning patterns at Shikshantar and Swaraj University in Udaipur.

Having briefly worked at Jaipur Rugs, Rahul quit and strived to conceptualise a journey that enables students to explore various alternative careers available at an earlier stage.

Often, a gap year after Class XII is looked down upon and frets many parents. I had heard from many apprehensive students regarding the lack of learning opportunities that also offer travel experiences during their gap years. That’s how I came to think of a journey like 52 Parindey, he adds.

Funded and supported by the Digital Empowerment Foundation, 52 Parindey comprised of an insightful journey where Rahul met 52 green heroes practising unpopular vocations around sustainable food and farming, over a period of 52 weeks.

“The journey of 52 Parindey, brought together all my interests areas like storytelling, filmmaking together and combined it with travel. During those 52 weeks, I immersed myself in local experiences, living with several unique individuals in various parts of the country, ranging from Punjab to Tamil Nadu, from Assam to Gujarat,” says Rahul, having pulled off this journey on a nominal travel budget of ten thousand rupees per month.

“I was earlier granted Rs 30,000 per month. However, I wanted to do it on a shoestring budget with minimal resources to prove that it could be affordable for students as well. Hence I chose to do it at a lesser budget,” says Rahul, adding that, he even brought a camera in the savings he made from the money allotted. Rahul mainly depended on road, rail and hitch hiking techniques for commute.

It’s rather interesting to note how Rahul did not finalise on all the innovators he was about to meet on his journey beforehand.

I just set foot with only 3-4 change makers and innovators in mind. I was fortunate because one experience spiraled into another and I could spend as many as 52 weeks documenting lives of these everyday heroes who are heralding the kind of change they want to see in the world.

So who are these eco-warriors who Rahul met on his journey? They range from a couple of friends running a millet powered restaurant in Mewar to a permaculturist greening society in Jaisalmer; from a middle-aged man who gave up his dealings with arms and weapons to become an organic farmer, to a former scientist turned forest conservationist working with tribals in Kutch; from a father-daughter duo in Assam manufacturing eco-friendly paper out of rhinoceros poop, to playwrights and actors from Bengal who are using the medium of theatre to spread environment-related messages.

Ask him about the major learnings and insights he captured while meeting these wide range of innovators and entrepreneurs and Rahul says,

This journey enabled me to learn a range of new skills and improvised my understanding on many sustainable topics like natural farming, waste management, butterfly conservation etc.

Rahul captured each of these stories and experiences on visual stills and film. He also connected with people on social media platforms like Facebook, Twitter and YouTube during the course of his journey, that culminated by the end of last year.

However, it’s no smooth adventure for Rahul who had to sell off his phone on the journey when the demonetisation was announced.

I was in Himachal when the demonetisation move was implemented. All the ATMs in the hills had shut down. Only Himachal Roadways was accepting old currencies. So, I sold off my phone and used that money on transport, recollects Rahul.

Owing to climate change and manmade interventions leading to pollution, people are increasingly adopting organic measures and sustainable practices. However, according to Rahul, the need of the hour demands more.

We now need to look beyond ideas of sustainable development and instead focus on regeneration of forest resources that we have already depleted. We have rather come too far, so we need to be far-fetched in ensuring long-term solutions as well, he opines.

Hoping his ‘transformative’ journey can be a learning model for many aspiring students vouching for sustainability, Rahul is now prepping to take on another trip where he will be meeting and learning from various handloom weavers across the country.

When asked what keeps him motivated to be on the move constantly, Rahul shares,