How these biking enthusiasts are making chopper motorbikes in India 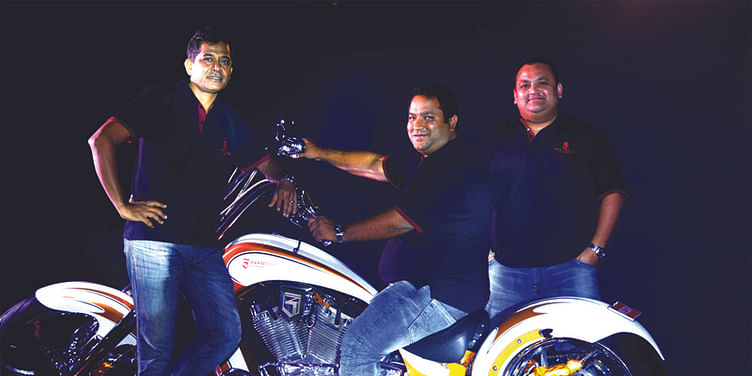 Avantura Choppers is a company that designs and manufactures Chopper bikes in India.

The problem it solves: Premium biking

Say chopper, and any motorbike aficionado would call it biking nirvana. Chopper motorbikes originated in California, US, in the 1950s, and over the years, have achieved cult status with their distinct designs and features. A chopper, simply, is a modified motorbike built to suit every unique rider.

While Motorbikes such as Triumph and Harley Davidson, have made their mark in India, the most passionate riders have most often opted to buy old motorbikes and refurbish them. One such passionate biker, Gaurav A Aggarwal, went a step further and started Avantura Choppers, which manufactures Chopper motorcycles. He says,

“Seven years ago, I wanted to get myself a chopper, inspired by the movies I’d seen, my own interests, and a personal desire. I got in touch with the most recommended service providers, and despite several attempts at modification jobs, I remained unsatisfied with these options from the unorganised sector.”

Gaurav met several bikers and other enthusiasts who echoed their personal desire for a real chopper experience. “That was my eureka moment, and I decided to embark upon the journey of pioneering this revolution,” says Gaurav.

Avantura Choppers is dedicated to give riders the most authentic chopper experience by delivering masterpieces curated for connoisseurs.

The Mumbai-based company focusses on bringing in street-legal choppers to India, and establishing itself as India’s first manufacturer in the segment. Gaurav says Avantura Choppers started with a carefully-designed strategy of announcing the company, and revealing the models to the media in a phased manner to generate conversations around choppers, to create their niche in the Indian motorcycle market.

By participating in industry events like the India Bike Week, and the upcoming Auto Expo, the team wants to create a brand that appeals to clients who are looking at premium products, and know their motorbikes.

“On the consumer front, in addition to the earned media from such events, we are visiting the major biking hubs, connecting with riding groups and associating with renowned riders to spread the recognition of Avantura Choppers throughout the community,” says Gaurav.

Roping in components and building the team

He adds the motorcycles come with a high level of safety, while making sure nothing takes away from the experience for a rider. The two bikes from Avantura Choppers — Rudra and Pravega — have been designed keeping the Indian riders and road conditions in mind. The team has partnered with the best component manufactures from across the world to source parts.

Its original equipment manufacturers include S&S Engines, Progressive Suspensions, Primo Drive Trains, and Mustang Seats from the US, Beringer Braking systems from France, Kellerman lights from Germany, and Avon Tires from the UK.

These manufacturers offer globally-renowned upgrade options for riders wanting to improve the performance of their motorcycles.

Gaurav roped in friends Amitabh Biswas and Vijay Singh for the venture and later got Kevin Alsop on to the team. Kevin, Founder of Big Bear Choppers, joined the team at Avantura Choppers as the Chief Design Engineer.

“Kevin has won a majority of the famed Biker Build Offs in the USA in addition to owning several patents in this space and having sold more than 5,000 choppers around the world. The first time he visited India was when he was 46, to set up the Avantura Choppers factory,” says Amitabh. The other founding members are brothers Sanjay and Ravi Krishnamoorthy.

Speaking on the core team’s background, Amitabh says Gaurav led multiple manufacturing units at Kisan Mouldings that his family owned. Vijay, on the other hand, comes with experience in AV solutions and technology operations.

Other critical members of the team include Patwardhan, who consults on compliance and government certifications, and Hiren Patel, who invested the seed capital when the team was developing the prototype. Avantura is a team of 25 people.

Avantura set up its first manufacturing unit in 2015, and started manufacturing its test models within four months. The factory is located a few kilometres outside Mumbai and with Kevin and Ravi, the team found it easy to find the space.

While Avantura Choppers does not alter the engineering or the geometry of a motorcycle, customers can choose from a range of handlebars, fenders, wheels, and about 20 options of body graphics.

“For the ultimate riding comfort, we also have two adjustment positions for foot controls. This is, by far, the highest number of personalisation options, and among other first in the sector. All this can be configured and tested at the experience centres across dealer showrooms, and the completion of this development session initiates the approximately three-month production cycle for each customer,” says Gaurav.

The team adds it only started accepting orders since the India Bike Week, which concluded in November. “We are awaiting the final certificate from Automotive Research Association of India. The initial traction has been favourable, and with this momentum, we are confident of achieving our targets. Our dealer network is also shaping up well, and we should be making the announcements soon,” says Vijay.

Last March, UK-based Triumph launched Bonneville Bobber in India priced at Rs 9.09 lakh. The company had set up operations in India in 2013. Avantura Choppers’ motorbikes come with 2000 CC engines and are priced above Rs 20 lakh each.

Currently a nascent market, reports suggest there will be close to 20,000 high power bikes on Indian roads by 2022. The market for high power bikes is growing at 60 percent on a year-on-year basis.

The team at Avantura Choppers is looking to launch a new model every year and expand to other motorcycle classes in the high performance categories. The company will also launch operations across countries soon.