This husband-wife duo is building learning journeys with Skola Toys 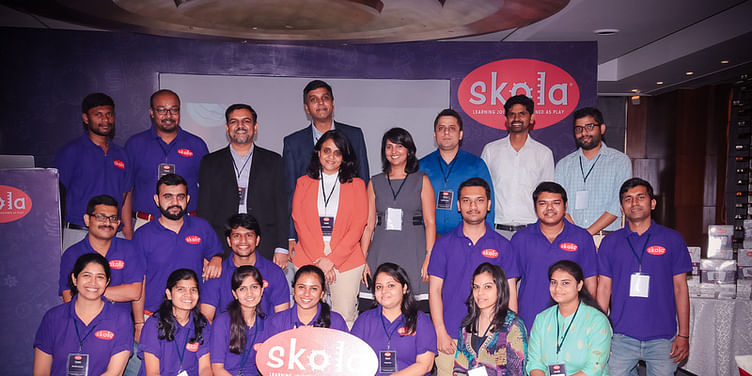 The problem it solves: Educational toys

It was the year 1992, and educator Geetha Sridhar felt there was a need for different ways and methods to teach children. She felt the best way for children to learn was to play, and through tactical touch and feel. However, there was a lack of educational toys in the market, and she decided to build educational products for Montessori schools that would allow children to learn through play and touch.

This was the birth of Kido Enterprises, as a small manufacturing unit at her home. Kido manufactures a range of educational toys. The products sold to Montessori schools range from Rs 500 to Rs 10,000.

In 2000, when Geetha’s daughter Mridula, a graduate from IIM, joined Kido, the team opened a manufacturing unit at Chikkalsandra, and in 2002, started exporting products to the UAE. In 2004, VS Manikandan, Mridula’s husband and also a graduate of IIM, joined Kido. He came with over four years of IT experience.

It was while working at the family business selling educational toys to kindergartens that Mridula and Manikandan realised kindergartens also needed different kinds of solutions that made education and learning simpler for a child.

“The ages between zero to five years are formative for the child. We felt that there was a need for a curriculum that suited children entering kindergarten. It was then, in 2012, that we built Kredo, as a turnkey school solution that worked with schools on end-to-end branding, training teachers, setting curriculum and working on different solutions,” says Mridula.

The focus on play

Kido still made toys and Kredo offered kindergarten solutions but the husband and wife duo soon saw the need for a solution for a child to continue to learn and grow while at home.

Mridula adds parents and teachers would say that children get all the toys and experiential learning at school, but what can be done at home?

Only one-tenth of a child’s time is spent in school, and the rest is at home, where they end up playing or using gadgets. Parents would seek solutions, but while there were enough toys in the market, most weren't helping in the children’s development.

By this time Mridula and Manikandan had also started their own school, which had given them enough insight into what parents need, and what solutions were available in the market. With their background with Kido and Kredo, the duo built toys that a child could use even at home. Thus came the idea of Skola, which focuses on the B2C market. They roped in their friend Nitish Agarwal as a co-founder.

“We then shut the school, because we don't believe in franchising, and distance management works for education. Manikandan and I put in our 100 percent efforts into setting Skola,” adds Mridula.

“Children learn through their hands and touch and feel, it’s not rote learning, not a nice song that you sing and can keep learning and make the child learn. Once the practical training is done, the child can easily learn the theory. It is through making mistakes and getting corrected through a toy, and not with someone telling you 2+2 is 4 and not 5. The child has to come to the conclusion herself. The toy needs to aid and guide him or here. Skola, therefore, works like a discovery-based self-learning set of toys.”

Toys at Skola are designed to be self-correcting. Learning, Manikandan adds, is a journey - one pack of toys are a set that is connected and interlinked with one another.

He adds that as a parent, if one, for example, wants to help a child learn mathematics, you will know what toy to pick, and what comes next after in the toy. There is a sequence where one thing comes after the next for a concept to be learnt.

The market for educational toys

“The child is engaged for an average of three months with each set of toys. It has a lifetime of 1.5 years at least. We have given activities in an instruction manual. The parent can show it once, and later the child can figure it out,” says Manikandan.

According to a report by Technavio, the global market for educational toys is seeing a CAGR (compounded annual growth rate) of 10 percent until 2021. The report suggests K-12 and stem learning are the primary focus of the educational toy market.

The biggest players in this segment include Lego, Mattel, Learning Resources, and Engino, to name a few. There are also players like Playabo, Flinto Learning, and a few others. Skola Toys falls under the mass premium segment. The average toy falls in the Rs 700- Rs 800 price bracket. Toys for ages two to six years are available online through the company website and through marketplaces such as Amazon, Flipkart and FirstCry.

The team is in talks with a few physical retailers as well. The average order size currently is between Rs 1,000 and Rs 2,000. The team is also in talks with regular schools to incorporate Skola Toys into their curriculum. It is also looking to add up on more marketplaces. The team is also reaching the US market through Amazon, and will participate in the prestigious Nuremberg Toy Fair.

“We currently have all the required safety compliances and certifications, and the Nuremberg Fair will get us on the global map,” says Mridula.