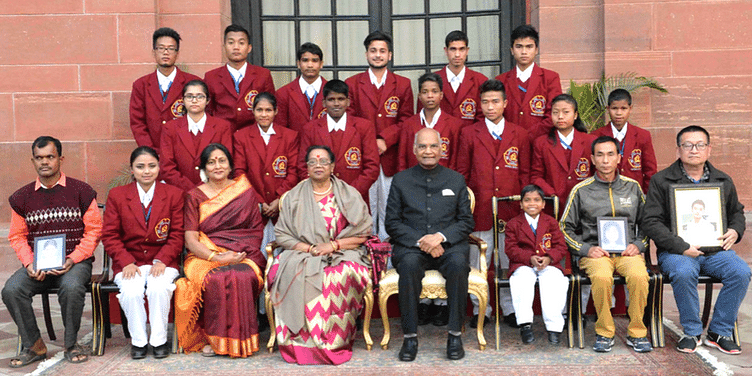 Eighteen children, including seven girls, have been selected for the National Bravery Awards 2017and will participate in the Republic Day parade this year

Ahead of Republic Day every year, children from different parts of the country are awarded for “meritorious acts of bravery against all odds”. Instituted in 1957, the National Bravery Awards have so far been given to 963 children (680 boys and 283 girls).

Eighteen children, including seven girls, have been selected for the National Bravery Awards 2017. Three are being awarded posthumously.

These youngsters, who were honoured by Prime Minister Narendra Modi on January 24, will participate in the Republic Day Parade at Rajpath. Here are some of the tales of the bravery shown by eight of these youngsters.

Earlier in April last year, six-year-old Mamata and her sister Asanti were taking a bath in a pond near their house in Kendrapara district of Odisha. A five-feet-long crocodile, which had strayed into the village, suddenly emerged out of the water and attacked Asanti, 7.

Instead of getting scared and running away, Mamata held onto her sister’s left hand and started to pull her out of the crocodile’s grip. Her physical force and loud screams attracted nearby citizens; the crocodile lost its grip on Asanti and slipped into the water. It was caught by the forest officials of the Bhitarkanika National Park.

Mamata is the youngest recipient of the Bravery Awards this year.

While his mother was away to wash clothes in the nearby stream, fire broke out in Betshwajohn’s kitchen when he was cooking along with his young three-year old brother. The home was soon engulfed in flames, and they had to run out. Fourteen-year-old Betshwajohn rushed back to the burning house to rescue his brother despite having escaped already. Both the children sustained injuries.

Laxmi and her friend faced harassment on the streets of Raipur. Her friend was beaten up while Lakshmi was abducted on a motorcycle. When they stopped at a secluded place with the intention to rape her, she managed to pick up and throw the bike keys away. Sixteen-year-old Laxmi, who suffers from tuberculosis, immediately fled to the nearest police station. The men were arrested on that very day.

When a masked man tried to break into her house in Gujarat, 17-year-old Samridhi fought back, despite the intruder putting a knife to her throat. In the ensuing struggle, Samridhi suffered deep injuries to her hand which left one finger damaged. She had to undergo multiple surgeries for her hand.

On 20 September, 2016, a school bus near Attari village hit a wall while crossing a bridge and plunged into a drain, risking the lives of 25 children. The driver was over-speeding.

The bus was filled with water soon and breathing become difficult for the terrified children. Sixteen-year-old Karanbeer, keeping a cool head, broke open the door and ran outside the bus. When he realised that many children were still inside the bus, he went back inside. By now the water level had increased.

Yet, determined to save his friends, he helped other children to escape and managed to save 15 lives while sustaining a deep cut on his forehead.

On May 13, 2017, 14-year-old Netravati was washing clothes at a pond near a stone quarry when she heard the screams of two boys who were drowning in the pond. Without thinking about her safety (the pond was overflowing due to rain), she dived into the 30-feet-deep water to save Ganesh and Muthu.

After pulling 16-year-old Muthu to safety, she went back to rescue 10-year-old Ganesh. However, Ganesh gripped her neck in fear. Netravati was suffocated to death while Ganesh drowned.

Illegal gambling was rampant for many years in Agra and 18-year-old Nazia decided to report this to the authorities. On 13 July, 2016, she collected related evidence and informed the police. Four people were arrested as a result and the illegal gambling business was stopped.

In retaliation, she received death threats; her family members were beaten up as well. Soon it became impossible for her to get out of her home or even go to school. She took to social media and tweeted to Uttar Pradesh then-Chief Minister Akhilesh Yadav for help. The authorities initiated action against the miscreants.

On a regular day, thirteen-year-old Sebastian was cycling to school with his friends. While crossing a railway track, his friend Abhijeet got his shoes in a tangle and fell on the track. The combined weight of the bicycle and the bag was upon him.

While the children were realising what happened, they saw an incoming train. Everyone fled except Sebastian, who stayed back and tried to help Abhijeet move away from the track. However the extra weight made it difficult.

Despite fracturing his right hand, Sebastian, with his courage and presence of mind, helped save his friend's life.