12 million women across 110,000 Indian villages are becoming tech savvy, thanks to Internet Saathi 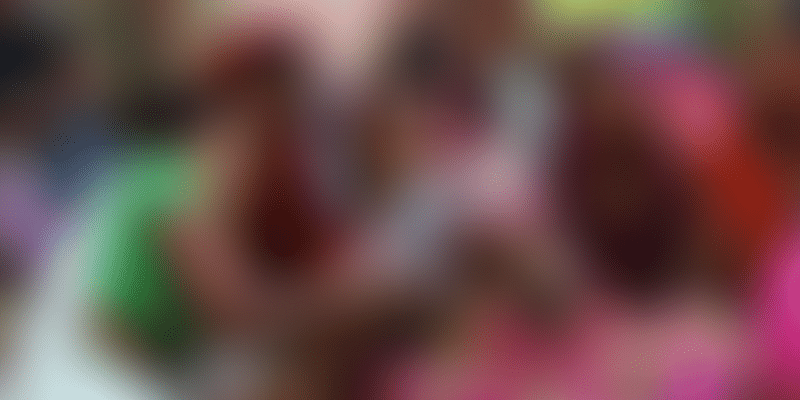 Located 52 km from Gorakhpur district, Deoria is a small town housing over 200 women. It’s home to Pooja Shahi, 22. During my morning walk into the fields, she points to the lush greenery and says, Didi, mera gaon dekho.

As I try to capture the imagery on my camera, I see Pooja swiping left on her phone to show me her designs on her website, Deoria Designs.

A budding entrepreneur, Pooja, like the other 12 million women associated with Internet Saathi, has stories that reveal how the shift to digital has transformed their lives.

At the 10th edition of Jagriti Yatra, a 15-day-long train journey that traverses the length and breadth of India to empower smaller towns and villages through enterprise, the narrative of these women from eastern Uttar Pradesh proves the existence of a gap that the internet can fill - or already is!

What is Internet Saathi?

A digital literacy programme aimed at digitally empowering rural women, Internet Saathi is an initiative led by the Tata Trusts and Google. Launched in 2015, the programme aims to expand to cover 300,000 villages across India and enable women across villages to benefit from the Internet.

Over 30,000 Internet Saathis, equipped with smartphones and tablets, are now working across 110,000 villages, helping women in their own and in neighboring villages to learn how to use and gain from the full potential of the Internet. Each Saath is trained for two days by Google and spends the next eight months interacting with rural women.

Google jointly worked with the Foundation for Rural Entrepreneurship Development (Frend) — set up by Tata Trusts as an extension of the Internet Saathi programme. In 2013, a pilot project was launched in villages of Rajasthan, Jharkhand, and Gujarat. The programme was then rolled out in 12 states: Andhra Pradesh, Haryana, Bihar, Madhya Pradesh, West Bengal, Tripura, Assam, Gujarat, Uttar Pradesh, Jharkhand, Rajasthan and Maharashtra.

Most of these programmes revolve around a curriculum that includes retail marketing, net banking, and various schemes for farmers and women. Every Saathi invests in training at least 150 women, most of whom set up independent businesses, or learn a new vocational hobby that enables them financially.

She further added that for the second phase of Internet Saathi, over 12,000 Internet Saathis across India voluntarily signed up to take up projects in their villages.

For 20-year-old Neha Gupta, being introduced to the internet meant fueling her love for accessories. An Internet Saathi herself, she unwraps a big box full of bangles and jhumkas that she created last night, and urges me to buy some of her creations. Neha carries the threads and the metal wires that goes behind the making of these wherever she goes. She is yet to explore selling them on the internet, but villagers in Deoria love her creations.

Didi, from the time I have started looking at designs on YouTube, I have opened up to a big world of ideas. I can only think of colour combinations and design patterns, even in sleep. The two days that we, the Internet Saathis, were trained were probably when I felt empowered and enterprising. I want to soon start taking online orders, says Neha, a final year commerce student at Bhimnath Rai Kaikand Degree College, Gorakhpur.

Like Neha, even 23-year Poonam Mishra has found a new version of herself. As an Internet Sathi trained over two years ago, she spent seven months training women in her locality. Today Poonam is one of the many Internet Saathis interacting with and training the rural women of Gorakhpur.

Recollecting her first day, she shares,

My mother, like the many mothers in Deoria, was apprehensive of being introduced to mobile. They said technology will spoil the minds of young women. After a lot of insisting, we were allowed to go to the training camp; there has been no looking back.

The societal taboos which seep into education and learning have been one of the major detrimental factors in programmes such as these. Every geography faces its own issues and needless to say, the stories of these women challenge age-old traditions.

Down South, states like Karnataka and Andhra Pradesh have also started on the programme. In Uridigere, a village in Tumkur district, Renukamba U.S, an Internet Saathi, has been given a target of training 150 women. Before the training process, each of these women are enrolled with their name, age, photo and with an ID proof.

The easiest way to identify these women is to collaborate with local communities that work on women welfare, she says.

We teach them about retail marketing, net banking, and various schemes for farmers and women, she says.

So far, how good?

We’ve witnessed how their enterprising nature has motivated them to use the internet to find new economic opportunities. That led us to consider expanding our scope for the programme. In December 2017, we announced the expansion of the Internet Saathi programme.

Women associated with the programme have today become agents of change; they – along with their families and communities – are prospering. Even as India took the lead to become the fastest growing internet user market in the world, only 1 in 10 Internet users was a rural woman.

Speaking about the impact of the programme, she adds, I am happy to share that the female to male ratio of internet users in rural India has gone up from 1 in 10 in 2015 to 3 in 10 in 2017 after the Internet Saathi programme.

Nirali Thakar, Representative of Tata Trusts from UP and Bihar, shares that most Saathis are handpicked through a Digital Literacy programme, which runs for two days. A stipend between Rs 1,000 and Rs 3,000 is awarded to Saathis for the next six months, when they are out in the field training other rural women.

Every Saathi in the 15 states we operate, is given a smartphone and tab. The Digital Livelihood programme, a part of the Internet Saathi programme, introduces these women to projects that involve enrolling, filling application forms, using Google and YouTube, and more. We recently concluded a research and data project for Kantar, Haqdarshaq, and we are looking forward to a UNICEF project that will be flagged off soon, she says.

According to Telecom Regulatory Authority of India, there are currently 499 million mobile subscribers in rural India, of which 109 million users own smartphones. Which means that in a country of 1.324 billion people, a meager 8.23 percent of people have access to smartphones. With over 400 million internet users, India has the world’s second largest online population. However, only 30 percent of India’s online users are women; in rural areas, this number drops to 12 percent.

As a partner for Google and Tata Trusts, the Jagriti Seva Sansthan, one of their partners, kickstarted the project in June 2016 in three districts. The geographies explored were: Deoria, Kushinagar, and Gorakhpur. For eight months, Purvanchal alone saw 1.2 million women across 4,200 villages being incubated.

Jagriti is committed to develop these women into leaders and bring more economic opportunities for them. With these women at the helm, we are sure Purvanchal is poised to usher into a new era of development.

Jagriti launched Phase 2 of the Internet Saathi project in September 2016, two months after its first project, in the districts Mau, Ballia, Maharajganj and Sant Kabir Nagar. The next 1,250 Saathis were trained.

During demonetisation, financial literacy training was organised. Today, these women are aware of online modes of payment like Freecharge, Paytm, PayU, and other e-transaction apps” Alka says.

A much-repeated saying goes: “When you educate a woman, you educate a family.” These internet Saathis have learnt that its true, and are breaking their own boundaries as they march towards a happier life that promises financial stability.