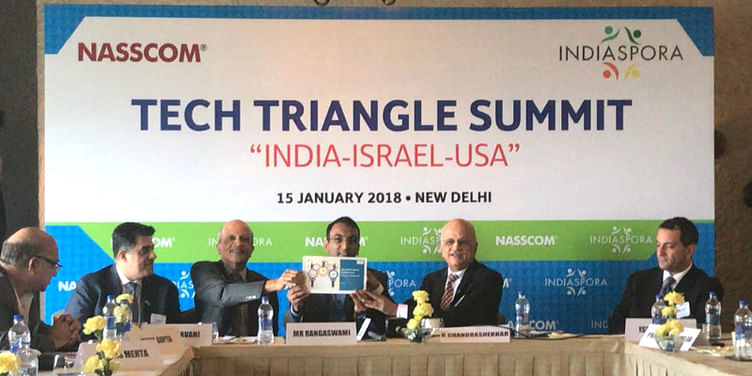 To promote trilateral business opportunities among India, Israel and the US, and to advance projects and enterprising ideas, a trilateral fund of $50 million was announced by Israel-India Technology Group at NASSCOM's Tech Triangle Summit in New Delhi on January 15, 2017.

Coinciding with Israeli Prime Minister Benjamin Netanyahu's visit to India, the day-long Tech Triangle Summit in New Delhi focussed on strengthening the trilateral ties for innovation and entrepreneurship among three countries — India, Israel, and the US.

Building on strong economic and intellectual engagement between India and Israel, while setting another example of the growing convergence, collaboration and cooperation between United States and India, the Tech Triangle Summit organised by NASSCOM in partnership with Indiaspora brought together senior-level entrepreneurs, government officials, and investors.

R Chandrashekhar, President, NASSCOM, emphasised on the mutual synergies that strengthen the 'tech triangle'. He said,

Today the three nations are natural allies more than ever before, as they share commonalities as well as complementarities. By streamlining intellectual and economic exchange, as well as forging new alliances that foster collaboration, innovation and entrepreneurship, we can create an osmosis of ideas within this tech triangle unlocking the joint potential of the three allies.

While the immense potential of deepening linkages between the three countries in geopolitics, business and industry, innovation and entrepreneurship, and financial investments in future remained the foremost focus during event, several substantive examples of trilateral collaboration — in the realm of technology, entrepreneurship or investment — were highlighted.

During the summit, a report “USA-India-Israel – An Ocean of Opportunities” was also jointly released by Zinnov and Indiaspora, outlining the promising troika of technology, investment and entrepreneurial opportunities across the three markets. The report illustrated how rapid growth of startup ecosystems has emerged as a driving force of mutual engagement between the nations and stressed on the need to intensify trilateral collaboration to unlock full potential.

India and Israel have enjoyed extensive economic, military and strategic relationships. At the time when ties between the two nations are scaling new heights, to impart further momentum to productive dialogue and mutual cooperation, particularly in the entrepreneurial and startup arena between the regions, NASSCOM and MassChallenge signed a Memorandum of Understanding (MoU), committing to support a scholarship of $5,000 each for up to 10 Indian startups to help them access MassChallenge Israel's industry-leading resources and focus on growing their businesses.

“With MassChallenge Israel’s award-winning, zero-equity resources and role as a leader in Startup Nation, Indian startups will be able to take their businesses to the international stage. We look forward to becoming a part of their founding journey,” added Israel Y. Ganot, Managing Director, Mass Challenge.

The event also coincided with the signing of nine MoUs between India and Israel to further strengthen the bilateral relations between the two countries. Israeli Prime Minister Benjamin Netanyahu, who is on a six-day visit to India, is accompanied by 130-member delegation from various sectors, including cyber, agriculture, and defence.