Meet Kalyan Akkipeddi, who quit his job to build a model village in Andhra Pradesh 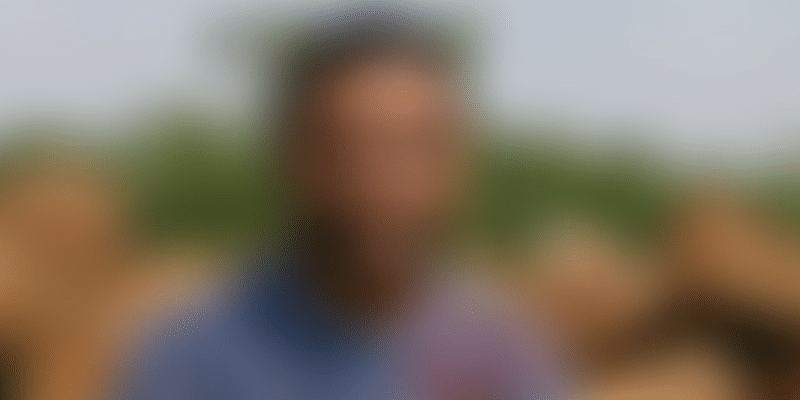 When a former engineer tried to transform what was once a bone-dry region into a green oasis simply by motivating its inhabitants, everyone around felt it was impossible. Some 120 km from Bengaluru in Anantapur district of Andhra Pradesh, the village, of which little was known, and had no signboards even indicating its location to outsiders, has now become famous through its self-sustaining model. The dozen families here grow crops organically, meet their energy needs entirely by tapping wind power, harvest rain to conserve water, and supply it to their homes with a solar-powered pump.

What's more, the village boasts of a Wi-Fi facility, provides entrepreneurial opportunities to farmers and has its own syllabus for children to hone their skills rather than learning by rote. Even as many parts of rural India still lack rudimentary amenities, the sustainable development model of this small hamlet makes it an example when it comes to water conservation, power generation, ending gender bias, and even eliminating casteism.

As water depleted in the rocky soil and farming became tough in the semi-arid zone, villages in the district despaired as people deserted them and migrated to cities for livelihood.

That was when 39-year-old Kalyan Akkipeddi -- who gave up a lucrative job in the finance and marketing division at General Electric to travel around the country's villages in search of knowledge -- arrived at remote Tekulodu.

Inspired by the simple life of tribals that he had witnessed during his travels, Akkipeddi chose to "intern" with a farmer family in Tekulodu and helped them increase their income from Rs 7,000 a year to about Rs 14,000 a month by putting scientific practices to work and tapping natural resources such as solar and wind power.

In 2013, he bought a 12.5-acre plot of land a few kilometres from Tekulodu, on the forest fringe near his home town Hindupur, in the same district of the Rayalaseema region. This has evolved into what he named ProtoVillage -- the prototype of an ideal village. Akkipeddi told IANS,

I was so inspired by what I saw in the tribal communities. Their wisdom allowed them to live in synergy with their surroundings. I thought of demonstrating that kind of life based on three simple principles -- a deep respect for soil, air and water, inter-dependence and, as a result, self-reliance.

Applying scientific methods to farming and living sustainably, Akkipeddi, along with the villagers, has in four years transformed the barren piece of land into an inspiring model that is self-reliant, environmentally sustainable, and socially cohesive. He remarked,

We want to be in the place where knowledge resides.

As part of developing the village, ProtoVillage's inhabitants had initially built eight farm ponds in low-lying areas to store rain water and had networked them. Akkipeddi added,

Though rains are scarce in the region, one good spell of about 90 minutes one day filled the ponds with enough water to last for months and attracted hundreds of people from nearby villages.

When local authorities had pushed farmers to dig ponds, they couldn't see the merit in them. But when they witnessed how we managed to conserve rain water, the number of requests to the administration to build farm ponds shot up, he noted, adding, "Such is the power of demonstration."

ProtoVillage is unique in other ways as well. Food is cooked for all the families in a community kitchen by both men and women, irrespective of caste and creed. And they live as a joint family, with even men taking care of children. Akkippeddi told IANS. Lakshmi (28), who migrated to ProtoVillage, said,

In other villages, women are confined to their homes, cooking and rearing children. Here, I have freedom to learn and do a lot of things, as others take care of my child.

The daily chores of the dwellers include working in the fields to grow crops, vegetables, fruits, and flowers. Some are involved in carpentry, soap-making, house construction and allied activities. In the evenings, apart from indulging in folk arts like music, dance or drama, "we all sit down to talk about the things we had learnt that day", Akkipeddi shared.

The sense of contentment the villagers live with is infectious. The Japanese concept of "ikigai", which means "a reason for being", is a familiar philosophy among the villagers -- right from 10-year-old resident and Akkipeddi's son Rishab. The learning centre in the village is also named Ikigai. Everyone in the village is constantly learning -- from farming methods, to building sustainable earthbag homes (bags filled with mud are used as building blocks instead of bricks, making for stronger homes), setting up wind turbines or just sitting down to learn a new language or a principle of science. Akkipeddi's wife Shobhita Kedlaya, who plans the curriculum for the village, said,

Earlier, adults in the village who couldn't read and write were shy to learn. But no longer, as we see them interacting with their kids. There is no age or gender bias in learning.

Not to be left behind, the children have a system of learning which goes beyond the classroom. They learn to build homes, have drafted their own constitution for the learning centre, tend animals, and even know to code software. And they share their knowledge with nearby villages. The community aims at meeting nine basic needs: food and water, shelter, clothing, healthcare, energy, connectivity, trade, education and disaster management, all in a sustainable manner.

G. Govardhan (22) a computer applications graduate from Tekulodu, takes greater pride in farming than doing a nine-to-five job. Inspired by the work on increasing the green cover, he mobilised people in the nearby villages to grow more trees. He remarked,

This is my world, with the greenest of trees and farms. Why would I leave this and go to a crowded city for a job?

ProtoVillage also houses a Rural Economic Zone (REZ), where farmers and others from the region can work on entrepreneurial ideas. Akkipeddi said,

Villagers grow poultry, rear goats and sheep, or do farming with no access to innovative work. The REZ helps them to become entrepreneurs by honing their trading skills.

The village now offers fellowships to rural youths, who can study and adopt their practices back home. Akkipeddi added,

We would like to create a support system for people from across the country, who want to set up ProtoVillages in their districts.