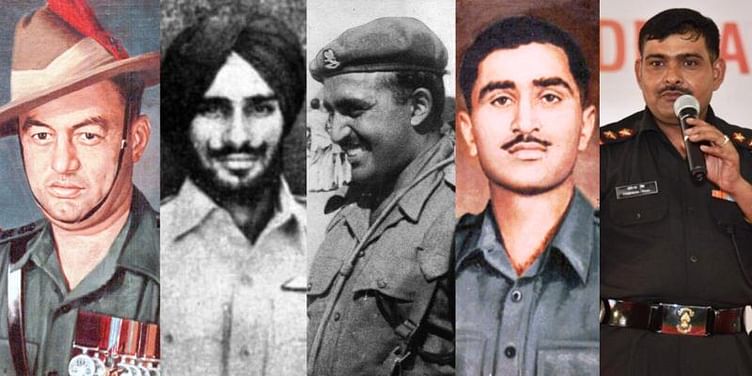 Lest we forget, here are stories of officers and jawans who were awarded with India’s highest military decoration.

The Param Vir Chakra is India's highest military decoration. Awarded for displaying distinguished acts of valour during wartime, it is an equivalent to the Medal of Honor in the United States and the Victoria Cross in the United Kingdom.

Over the past 70 years since its institution, the medal has been awarded 21 times, of which 14 were posthumous. As India celebrates Republic Day, we bring to you stories of five jawans who were honoured with the highest gallantry award for their bravery and courage.

Major Somnath Sharma was the first recipient of the prestigious Param Vir Chakra. In 1942, after finishing his college, Major Sharma joined the 8th Battalion, 19th Hyderabad Regiment of the British Indian Army. He was a part of the Arakan Campaign in Burma during the Second World War. In 1947, when the Indo-Pakistani War broke out, he was a part of the units deployed in the valley to stop the invasion by Pakistan into Kashmir.

Major Sharma's left hand was in a plaster cast, yet he had insisted on joining his men in the operations. He and his company were patrolling the Badgam area, when they were surrounded by 700 tribal militants approaching from the direction of Gulmarg. Knowing that losing Badgam will mean the infiltrators entering the Srinagar city and its airport, Major Sharma and his men fought back.

Outnumbered seven to one, Major Sharma took it upon himself to ensure all his men had ammunition. Running from one post to another, he exposed himself to enemy fires several times in the process. The men stood guard and were eventually heavily outnumbered. While fighting the militants, a mortar shell exploded on a pile of ammunition near Major Sharma. Twenty-four-year-old Major Sharma, along with 21 jawans lost their lives in the battle. Two-hundred militants died on the other side, slowing their movement significantly and eventually foiling their plans of entering Srinagar.

After gaining independence from Belgium in 1960, Congo's military faced an internal mutiny, followed by violence between the black and white civilians. The Congolese government reached out to the United Nations (UN) seeking help. The UN launched a counter operation with a multi-national peacekeeping force. The 3/1 Gorkha Rifles were a part of the mission.

As part of the rifles, Captain Salaria and his men were deployed in the Katanga region of Congo to protect the fleeing whites. The enemy had erected a block to cut off the city of Élisabethville with the nearest airport. The mission was to protect the UN Headquarters in the city and reestablish movement in the region.

They launched rockets and destroyed the enemy’s armoured cars. Taking opportunity, the Gorkha men ran in, despite being outnumbered by enemies by a ratio of 4:25. Captain Salaria and his men killed 40 enemies in hand-to-hand kukri (Nepalese knife) combat. The enemy fled the scene, and control was restored. Twenty-six-year-old Captain Salaria, however, was hit by gunfire in his neck and succumbed to the injuries before reaching the hospital.

Lieutenant Colonel Dhan Singh Thapa was with the 1st Battalion of 8 Gorkha Rifles, when the Sino-Indian War broke out in 1962. The Chinese attacked Srijap 1, one of the many posts created to strengthen India's contol on its disputed mountainous border with China. Guarded by Major Thapa and 27 other men of his company, the post on the northern bank of Pangong lake was responsible for an area of 48 sqkm. The Chinese had set up three posts around it in retaliation but no fires were shot.

Soon, the Chinese, 600-men-strong, launched attack with artillery and mortar fire. The Gorkhas, at the sight of enemy, fired with light machine guns and rifles, and killed a large number of Chinese troops. The artillery attacks continued, causing heavy casualty to Major Thapa's men. The Chinese reached closer, and attacked the post with incendiary bombs. The Gorkhas countered with hand grenades and small arms fire, retaliating them back, and killing many in the process.

With multiple waves of attacks, the Chinese troops moved close. With only three men left, Major Thapa's bunker was attacked by a bomb. He jumped into the trenches and killed many intruders in hand-to-hand combat, before being overpowered and taken as a prisoner of war. After undergoing harsh treatments as a prisoner of war, Major Thapa was released after the war was over. He was awarded with the Param Vir Chakra, post which he continued to serve the army till 1975.

Flying Officer Sekhon took on many Pakistani jets before being hit. The wreckage his Folland Gnat fighter aircraft was found in a gorge, and his body, despite many search efforts by Army and Air Force, was never found. Awarded the Param Vir Chakra posthumously, Flying Officer Sekhon's air combat skills were also praised in an article by Salim Baig Mirza, the pilot who shot him down.

Subedar Yogender Singh Yadav is currently 37 years old and part of the 18th Grenadiers infantry regiment. In 1999, when the Kargil War broke out, he volunteered to lead the Ghatak Platoon, which was organised to capture three bunkers built by Pakistani soldiers on top of the Tiger Hill in Kashmir.

Situated on top of a vertical, snow-covered, 1,000-foot-high cliff, the bunkers were to be climbed from the base using mountaineering tools. Grenadier Yadav led the climb, fixing ropes for his team to follow. When they were midway through the climb, an enemy bunker attacked using machine guns and rockets, killing the platoon commander and two other soldiers.

Grenadier Yadav was hit by three bullets, but he continued to climb. Once he reached the cliff, he crawled ahead, and killed four Pakistani soldiers using a grenade. Once the enemy fire had stopped, the remaining platoon moved in and conquered the first bunker. Grenadier Yadav and two other soldiers then attacked the second bunker, killing four Pakistani soldiers in hand-to-hand combat, and subsequently capturing the Tiger Hill, one of the biggest and most strategic victories of the Kargil War.