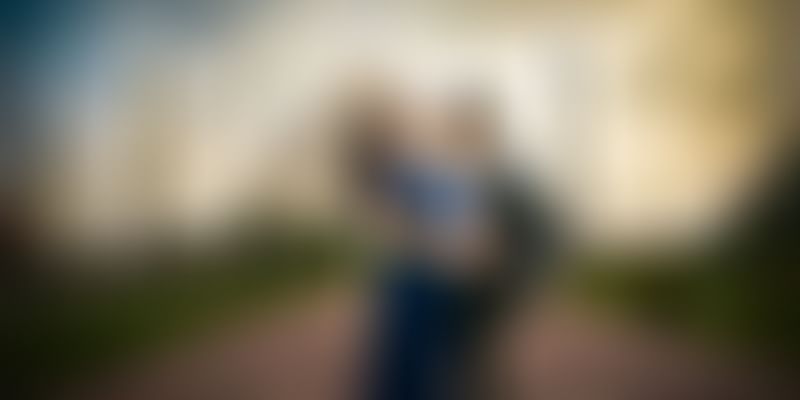 Bridal photographer Rajesh Pandey didn’t let failure stop him; it was his willingness to try again that allowed him to convert his #PassionToPaycheck

That lightbulb moment – the one when we see our lives clearly for what they are, and our chosen paths suddenly reveal themselves – that’s what we all secretly hope for. Rajesh Pandey had worked for eight years in the corporate world, with

Photography had been a part of his life since childhood. This was before the advent of digital photography and the World Wide Web. His father, a photography enthusiast, took many rolls of film, and would diligently convert them into film slides. “Whenever we had guests in our house, he would proudly display his skills on a slide projector,” remembers Rajesh fondly. But the medium was slow, expensive, and completely manual – not something easily accessible to a young boy, and something he would turn to years later when disillusionment with his corporate career struck. “I bought my first camera (digital) in 2005. It was a regular (unbranded) point-and-shoot camera that I picked up in Nepal. I have always been attracted to art and design right from my childhood. But I saw my interest in photography really picking up when I was getting burnt out in my corporate career chasing numbers. Photography became a stress buster, and it gave me an outlet to express my creativity.”

Rajesh’s journey into photography started because of a love for street photography. “I was fascinated by the magic of the moment. I was drawn to the works of legendary photographers like Henri Cartier Bresson, Anders Peterson, Elliot Erwitt, and other magnum photographers. I loved their body of work.” Attracted to the chaos and beauty of street photography, he knew right from the beginning that his genre of photography had to be around people. Thus, the natural choice was to either get into Fashion photography or Wedding Photography. “I chose the latter because it gave me one hundred percent creative control of my work,” says Rajesh.

Rajesh has been shooting weddings from the beginning. As someone who is self-taught and did not have a background in the art or photography business, his first big challenge was to work on his skill and knowledge as a wedding photographer. “I started shooting every wedding that I could. I also learnt from the best in the industry,” Rajesh says, underscoring that the learning on the job, and the time to practice by shooting weddings, even if not as the official photog, helped him fine tune his skills.

Try, and try again! Neck deep in debt from the EMIs for a new home, amongst other things, Rajesh quit his corporate job when he and his wife were expecting their first child. “It was super scary, and there were many sleepless nights.” A few months down the line, Rajesh came to the bitter and sad conclusion that it couldn’t work out. With not enough assignments coming in to make a living, and zero understanding of how to make the business work and be profitable, Rajesh was in a fix. “I had to swallow my pride and go back to work. I was heartbroken, and felt that it was the end of my dream.”

“I remember how everyone was aghast when I shared my plans to quit a steady job and get into photography full time. After all, I had studied Engineering and done an MBA to chase the corporate dream. I couldn’t even muster the courage to tell my wife the first time I quit. I would just pretend to go to work every day and end up shooting on the streets. It was madness.”

But he didn’t give up, and just kept shooting during the weekends. He used every vacation and time off from work to shoot or edit or learn and improve on his photography skills. “It took me one full year to finally get my wedding photography business profitable. It was only when I had decent commercials and a healthy pipeline that I mustered the courage to once again quit my job and get into photography full time.” This time, Rajesh ensured he had his wife’s full support – “She has been my pillar of strength ever since.” Six years later, his company Bridal Safari is doing well and grooming the next generation of photographers.

“A lot of photographers are in love with their pictures,” he says. This is especially true in this age of instant gratification and likes, thanks to Facebook and Instagram. Rajesh feels this attitude is a big hindrance to grow as a photographer. Rather, he advises getting your body of work in front of as many people as possible and seeing what feedback they offer. “Learn from the best and keep shooting! It is a fierce, competitive and lonely battle out there. Be prepared to be un-rewarded and un-recognised for a long time”, warns Rajesh, adding that it is commitment that will see you through. “Fight it out till you get there and when you get there fight even more!”

Some people may have the knack to get good shots. “But that doesn’t necessarily make them a great photographer. Every single great photographer I know is deeply committed to their craft. They show up - every single time. It is this one quality that beats everything else for me” feels Rajesh. He goes on to say that this kind of commitment is not a skill, but a mindset. Every other skill can be learnt over time, but not commitment. “I would say talent is over rated. Get the quantity first. Shoot more and talk less!”