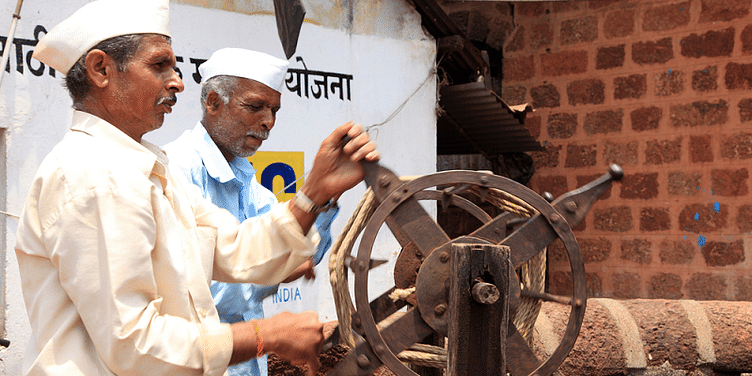 In Mahatma Gandhi’s words, "If the village perishes India will perish too." India has nearly 6.5 lakh villages, where to 68.8 percent population of the country lives. Rural development has been considered a key parameter in India’s growth and prosperity.

We bring to you, stories of 10 unique villages. These stories are testament to what communities can accomplish, when residents come together and work with a common goal. From India’s first fully solar powered village to a village that houses nearly 60 millionaires, these are stories of perseverance, hard-work, and empathy.

Not just the houses, even the bank in this village does not have doors. Shani Shingnapur is located in the Ahmednagar district of Maharashtra, where residents feel little need for security, thanks to their belief in special protection from the Hindu deity Shani, whose famous temple is located here. It is believed that the deity came in a villager's dream and the village to abolish doors. Strangely, for centuries together, no theft has been reported in this village. Following the village’s tradition, in 2011, the United Commercial (UCO) Bank opened a ‘lockless’ branch in the village, the first of its kind in the country.

Located near Bodh Gaya in Bihar’s Jehanabad district, Dharnai, until recently, didn’t have access to electricity. A few years ago, the villagers took things in their own hands, and with help from Greenpeace, installed a solar-powered micro-grid, providing 24×7 electricity to more than 450 households and 50 commercial establishments. The village that houses 2,400 people is now self-sufficient in terms of energy needs. Dharnai's children no longer have to limit their studies to daytime, and with enough streetlights, women don't fear stepping out of their homes at night. Small industries are propping up prospering in the village.

Mendha Lekha is a tribal village situated in Gadchiroli district, Maharashtra. After six years of legal battle, the village became first in India to be granted community forest rights. Today the village has a successful bamboo economy. The entire village, comprising 450 people belonging mainly to the Gond tribe, works together in cultivating bamboo as raw material for the paper industry. The villagers make profits in crores, and are using the money for several development and social welfare activities in the area.

4. A village where everyone speaks Sanskrit - Mattur, Karnataka

Mattur, a village located in Karnataka's Shimoga district, is a rare place. Perhaps the only place in India where the ancient language continues to flourish, nearly 5,000 residents of Mattur converse with each other in Sanskrit. Children start studying the Vedas at the age of 10; and once can easily hear on the streets, expressions like Katham Asti (How are you?), Aham Gacchami (I am going) and Shubham Bhavatu (May all good happen to me). Thanks to a workshop conducted by an organisation in 1981, villagers here took the initiative of rejuvenating the language and worked together to make Sanskrit their primary language.

5. From among India's poorest villages to prosperity - Achala, Odisha

Achala, situated in Odisha's Nabarangpur district was once counted among India's poorest villages. With positive interventions, however, things are now changing. Today, the village is being propelled into prosperity, thanks to its rising number of cashew growers. Cashew sells at Rs 100 per kilo in the market, which has helped increase the income of villagers. It yields quick incomes, and requires little water for management. Currently, 100 out 250 families here are growing cashew, with a steady rise in income and levels of prosperity.

Punsari is a village situated in Gujarat's Sabarkantha district. The small village, however, boasts of its free WiFi, CCTV cameras, and air-conditioned schools, water purifying plants, and biometric machines. With top notch facilities which can put metros to shame, Punsari has two primary schools and a primary health centre, proper street lights and an operational drainage system. Every home here has toilets. All of this was made possible by a young man, Himanshu Patel, who became the village's sarpanch at the age of 23. A graduate of North Gujarat University, Himanshu focused on ensuring government schemes get implemented in his village, with added focus on education, healthcare, and technology. The village and its people, since then, have been able to create wonders.

Hiware Bazar, situated in the Ahmednagar district of Maharashtra, is India’s richest village. Only a few years ago, Hiware Bazar was one of the most drought-prone villages of Maharashtra, with a monthly per capita income of Rs 830 in 1995. It was around the same time, when Popatrao Pawar, the only postgraduate among the villagers, reluctantly contested the Gram Panchayat elections and became the Sarpanch. Taking charge, he convinced the villagers to shut down its 22 liquor shops, and got the gram sabha to tie up with the Bank of Maharashtra to grant loans to poor farmers. Inspired by Anna Hazare’s work in Ralegan Siddhi, a village 35 km away from here, Popatrao started rainwater harvesting and water conservation programmes in Hiware Bazar. The villagers built 52 earthen bunds, 32 stone bunds, and nine check dams, and dug nearly 300 open wells. With rising groundwater level, everyone prospered. Today, the village boasts the highest Per Capita Income in the country. The average income of villagers here is Rs 30,000 every month. Out of its 235 families, 60 are millionaires.

Mawlynnong, located in the state of Meghalaya, is Asia's cleanest village. The village has had houses with fully functional toilets since 2007. Each house has bamboo dustbins installed for waste collection. Smoking, as well as the use of plastic, is strictly banned in this village. The garbage is dug into a pit is re-utilised as manure. Villagers come together and clean public spaces, its school, and its clinic on Saturdays. Mostly inhabited by members of the Khasi tribe, the village has a matriarchal society, and enjoys a 100 percent literacy rate.

9. A village where 111 trees are planted every time a girl-child is born - Piplantri, Rajasthan

In a noble attempt to save the girl child while creating environmental benefits, the villagers of Piplantri plant 111 trees every time a girl child is born. The villagers also raise money and put it in a fixed deposit, to ensure the girl gets good education when she grows up. At the birth of the girl child, villagers come together in planting trees, and ensure that they survive and flourish. Over years, the villagers here have managed to plant over a quarter million trees on Piplantri’s grazing commons. The villagers also grow aloe vera, and process and market their products, including juice and gel. This, over years, has become a stable source of livelihood for many residents of Piplantri.

Kadbanwadi is located in Maharashtra's Pune district. Once barren, it is today self-sufficient, thanks to the water conservation initiatives taken by Bhajandas Vitthal Pawar, a retired teacher and resident of the village. The first resident from his village to have complete a bachelor’s degree science, Bhajandas taught science to school students for 28 years before quitting his job and committing all his time to improving his village. He resettled in his village from Pune in 1988, travelling an everyday distance of 96 km from Kadbanwadi to teach.