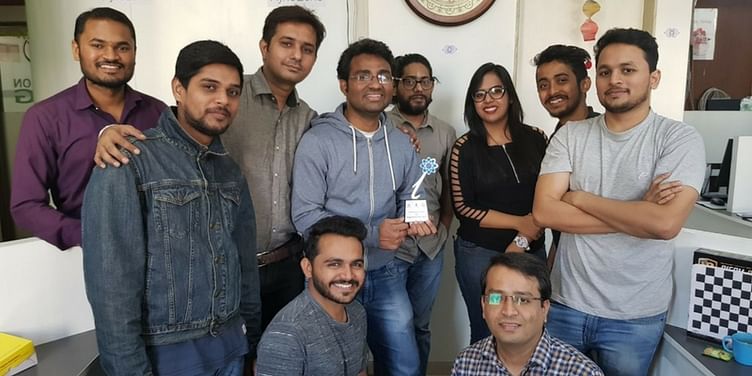 A first of its kind, India-made AjnaLens is tapping into the lack of options addressing problems of high costs and time consumption for several segments of operations in sectors like automobile, aerospace, defence, healthcare, manufacturing, architecture and construction.

Problem it solves: Reduces cost and time consumption in operations for industrial sectors

When Tony Stark struggles to decode his father Howard’s model that would lead to a possible elemental replacement for Palladium, the fancy graphic that his assistant Jarvis floats on air for Tony is the stuff of augmented reality (AR) dreams.

It seemed far-fetched and surreal when Iron Man 2 was in the theatres, but AR is now real and has far reaching consequences and value in the current tech space.

The applications started off with gaming on PCs and tablets; they now extend to unlimited possibilities and sectors, like healthcare and military operations.

While there are major global models like the Magic Leap One and Microsoft Hololens (mixed reality smart glasses), Mumbai-based Dimension NXG made a major breakthrough by developing the country's first desi AR headset, AjnaLens.

Ajna means 'power of sixth sense', which resonates with visualising non-existing environments. The makers behind AjnaLens wanted to bust the myth that world-class technology cannot be made in India. They employed mixed reality (MR), which merges real and virtual worlds to produce new environments and visualisations, where physical and digital objects co-exist and interact in real time.

Dimension NXG was founded in November 2014 by Pankaj Raut, CEO and a graduate of Mechatronics Engineering from London South Bank University, Abhijit Patil, COO and a Mechanical Engineer from IIT Bombay, Abhishek Tomar, CTO and a Computer Science graduate from Jabalpur University, and Gaurav Godbole, who is the CIO and holds an MBA in Finance from Pune University.

"I am already seeing interesting use cases of the AjnaLens in our business in training, operations, and maintenance. AjnaLens will have pathbreaking use cases in defence and medical areas."

AjnaLens first understands the environment by sensing the depth of surroundings and then creates a real-time mesh of it. It then amplifies any 3D digital hologram in real life.

"The best part of AjnaLens is that you can interact and simulate with these holograms, superimpose them on real-life objects, and put annotations on them. Anybody from around the world can simultaneously and remotely access these holograms in real time."

The headset is capable of a 90-degree field of view, giving users a wide breadth of vision, and making it easier to view content. The user interface supports voice, gesture and gaze inputs, allowing users to keep their hands free while working. A few powerful set of capabilities include computer vision, world mapping, and artificial intelligence (AI) that enables hands-free visualisation of real-time information.

While the team gathered all the resources in place, they started R&D towards giving superpower of visualisation in 3D in the real world, and augmenting non-existing things in real life.

Abhijit highlights the importance of the hologram’s quality, in order to look and act like it is part of the real world. "We have been able to create breakthroughs in this space. Due to Abhishek's 15+ years expertise in VFX (AR in movies), Pankaj's expertise in photogrammetry and working on MR in MIT media labs and Abhijit’s expertise in hardware development, we have a strong understanding of how to blend the digital in the real world," he said.

Currently available AR headsets (Microsoft Hololens, Meta, Magic Leap) suffer from a very small field of view (35 to 60 degrees), with poor hologram quality. Moreover, they are not easy on the pocket, each set costing between $3500 and 5000, excluding customs and shipping costs to India.

Reportedly, they are able to do this by using smart glass-based AR project management module, AR product development module, AR training module, AR remote assistance and a few other applications.

The founders point out some of the other features that sets them apart in the market, including breakthrough ambient lighting. Holograms are not just brighter and more opaque, with ambient relighting technology, but they are also far more dynamic. So whether you’re exploring the heart system or doing an intense dissection, everything feels real and immersive.

The software takes into account the presence of AI and works to improve the experience over time. The holograms blend with the environment by using ambient light shades on them, which means AR cars would have shadows on the other side when being viewed directly under sunlight.

The mapping technology includes one of the world’s most advanced 3D capture systems. Digital holograms integrate seamlessly with the environment.

Apart from technical defensibility, the firm’s business plan is on the basis of providing end-to-end AR solutions (including hardware, software, content and support) to enterprises.

"Other competitors have only their developer edition ready in the market, and enterprises don’t know what to do with that after buying it. So we are offering a complete next-generation wearable computer to enterprises to save their time and cost and increase productivity."

CTO Abhishek Tomar has a strong background in technology development in movie industry. He was a technical director at Red Chillies Entertainment where he developed an algorithm for de-ageing celebrities digitally for Bollywood films.

The team has been developing the technology for AjnaLens in stealth mode for the last two years and even made it to the final round of interviews with Y Combinator in 2017. It has also received Graham Bell Innovation Award for Breakthrough Low-cost Technology, 2016.

Dimension NXG is ready with the technology and has filed two patents for AjnaLens, and is ready to go for final manufacturing run to produce a shippable product.

With a headset like AjnaLens, which will make Jarvis proud, being fashioned right out of India to conjure up impressive and useful AR, the future of this technology in the country does not seem fantastical anymore.