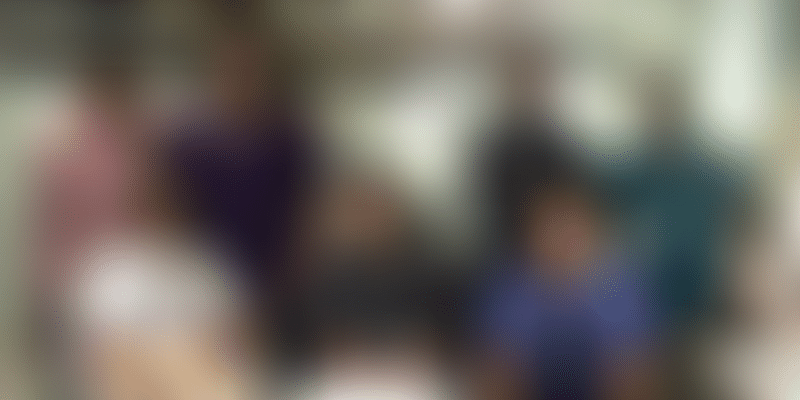 For the industrial sector, time is money. And any downtime in production can lead to huge losses. Very often, these downtimes can be prevented by regular maintenance of machinery and electric components. While machinery is taken care of in most cases, the electrical aspect is often ignored until disaster strikes.

Earth pits or grounding points, a critical part of the electrical infrastructure, need to be maintained properly, or you could end up with improper dissipation of leakage, a faulty current, or worse, reverse currents, that can cause sudden failures and losses. It is important to control and monitor the status and condition of earthing and its related assets so that timely interventions can be made before a failure or malfunction occurs.

Sometime in 2016, while working on projects related to automation in manufacturing, Ravi Teja A, Saideep Reddy K and Raghu Kumar M realised that much of the electrical side of operations was completely manual and reactive.

Ravi says, “This led to a lot of unwanted downtimes, bad maintenance and pilferages. We wanted to see how we could impact electrical systems using data. And our first breakthrough came when we successfully diagnosed a problem at one of India’s largest oil and gas companies, which led to them saving more than Rs 2 crore.”

That success led the trio to set up Ayasta Technologies a few months later in 2017.

A chemical engineer from VIT University Vellore and an alumnus of the Indian School of Business, Ravi leads the Sales and Marketing, Customer Outreach and Engagement, Operations, and Fundraising functions at Ayasta. With a Masters in Experience Design from Milan’s Domus Academy, and an Information Technology Engineering degree from VIT University, Saideep looks after the product development. Raghu has over 20 years of experience in design and development of Embedded Systems and IoT sensors, and takes care of Technology at Ayasta.

“Traditionally, electrical systems are mostly analogue, which makes getting data from them difficult. We decided to custom build our own hardware to extract data from passive sources like the earth or grounding pits,” explains Ravi, adding that the first leakages happen in these places and often goes unnoticed. The leakages can be categorised into two types - transient and non-transient. Transient leakages are normal, which happen due to resistive or capacitive effects of electrical infrastructure, hence there is little that can be done to minimise them. The non-transient leakages happen due to deterioration of equipment, which is the area they want to make a difference in. “We had to write sophisticated algorithms that had to differentiate the two, which is tough,” says Ravi.

Ayasta has two core offerings: CEGMA Earth and CEGMA Node. CEGMA Earth is broad in nature and connects to the end points of the electrical systems, like the grounding points. With features such as rich dashboards and real-time data, CEGMA Earth helps arrest electrical leakages and monitor performance of machinery, thereby preventing deterioration and failures, cutting down on power wastage and creating an efficient power grid in the facility. A key feature of CEGMA Earth is that it triggers intelligent alerts through email, SMS and a call in case immediate action is required.

CEGMA Node, on the other hand, goes deeper into the system and collects data such as the load capacity, current, harmonics, etc. from various nodes within the electrical infrastructure and easily pinpoints when specific anomalies arise in the equipment within the electric grid.

The patent pending platform also enables Ayasta to predict failures even before they happen. Ravi says, “By delivering the right information and actionable insights to our customers at the right time, we help increase productivity of resources through optimal utilisation and prevent failures which could lead to expensive downtimes.”

The young startup is among the six startups chosen for Cycle II of Qualcomm Design in India - Challenge 2017 (QDI-C 2017). As a finalist, in addition to access to the Qualcomm Innovation Lab, $10,000 in prize money, and a chance to win $75,000, the startup is receiving mentoring, engineering and technical support for product development. Ravi says, “We are a startup beyond the idea stage and our requirements have been different from the other startups. Qualcomm has been very accommodative to our needs, be it technology, logistics or resources.”

The young entrepreneur says that the discussions with Qualcomm have added a new dimension to their product roadmap. “The discussions we had with Qualcomm helped us understand how we could deploy our solutions with improved communication schematics and facilitate rapid deployment, independent of the infrastructure constraints at site.”

The team is looking at integrating Qualcomm CSR1010 chipsets into the CEGMA devices. Ravi says, “After a lot of discussion, we chose these chipsets to create a common platform for all our sensors, and build expandability into our platform in a plug-and-play fashion. It will also strengthen the reliability of the platform while reducing costs related to communication infrastructure.”

And because Ayasta works mostly in an industrial setting, he adds that Qualcomm’s technology expertise and their best practices are helping them up their game. As part of its product development plans, the startup is looking to upgrade the platform’s analytics tools using ML and edge intelligence and enhance the intelligence it offers.

In a span of a few months, Ayasta already has a clientele which includes Indian and European Fortune 500 & Forbes 2000 companies in the oil & gas, energy, pharma and telecom sectors. “We have generated more than $10 million in value to our customers by improving efficiency and enhancing safety,” says Ravi.

Looking back, Ravi says there was both excitement and nervousness when they began their journey. “Because we were developing the product in-house, we had these doubts on whether it would really work, whether it would be impactful and help reduce downtimes. These doubts were put to rest when we saw our idea translated into a dream product which functioned exactly the way we wanted it to,” he adds.

Being a new entrant with a new offering in a very traditional space, the challenge in the initial days was gaining customer trust. Ravi says,” Many industries we went to were particularly curious and interested. However, it was a challenge to convert that curiosity into a PO.”

CEGMA requires Ayasta’s customers to approach maintenance differently, and that’s why customer education is still a challenge for the team. Saideep says they are figuring out ways to package it in ways familiar to their customers. One of the ways they are addressing this challenge is by instituting customer success engineering. Here Ayasta assigns a Customer Success Engineer, who are subject-matter experts helping customers understand, and implement the solution. They closely interact with customers and Ayasta’s product team and help to remove information bottlenecks."

The founding team has envisioned the growth of startup in three phases. The first is the data acquisition stage, where the attention and effort is on acquiring data and running basic analytics. “This is the stage we are in now. Our focus is on acquiring customers and collecting large amounts of data. We are using analytics on collected data to provide insights into anomalies and impending failure events.”

The next stage will be the data model stage where the emphasis will be on building sophisticated data models with large amounts of data to create more value for customers. The third will be the automation stage, which will focus on using high-end AI to automate the entire process of anomaly and failure detection and to have zero human intervention in diagnosis. Ravi says, “We believe we are transforming the way electrical systems are perceived and want to go one step further and transform the way they are maintained.”