Started by ex-techies, this new-age edtech startup is making science fun for children 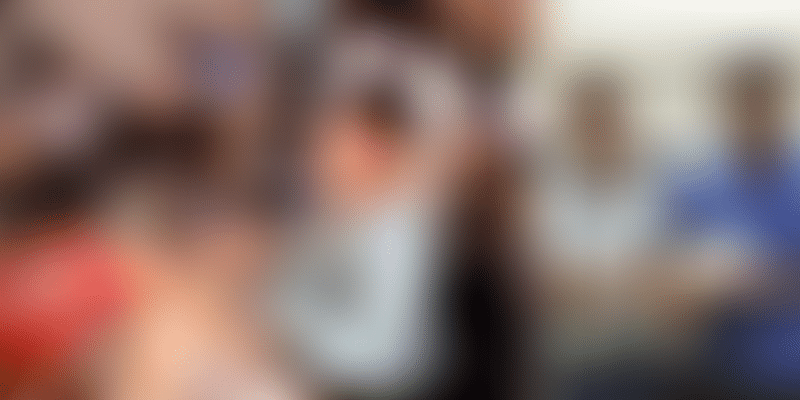 Set up as a tinkering lab, Science Ashram’s gamified learning techniques have benefitted over 3,000 students.

Dhruva V. Rao remembers his carefree holidays spent loitering around the gujjari angadi (scrapyard) in Mysore. He and his friend, Rohan Ramanuja, went around collecting mechanical and electrical spare parts for their tinker projects. “As kids, we built a lot of stuff like our version of a Segway, speakers, mini cranes etc,” he fondly recollects.

Having finished their engineering from Sri Jayachamarajendra College of Engineering, Mysore, the two childhood friends then parted ways to pursue different careers. However, fate had it they reunite for a bigger mission. “At separate junctures we both realised we did not fit into the corporate world,” shares Dhruva, who quit his IT job after a five-year stint at companies like GE and Infosys.

Finding their passion in imparting knowledge to the coming generations, both Rohan and Dhruva took to teaching high-school children in Mysuru before they quit to start Science Ashram in 2014.

Tinkering as an effective way to learn and grow

Science Ashram is a tinkering lab founded to promote child-centred learning and innovation through practical-based education. “The idea was to teach children STEM (Science, Technology, Engineering, Maths) in a way they play,” says Dhruva.

Emphasising the role of tinkering in aiding a child’s creativity, the 29-year-old adds,

Ten years ago, jobs like AI engineers, app developers, YouTubers, drone experts, VR developers did not exist. Since we don’t know what’s coming next, we need to teach our children the art of learning. And tinkering enables children to become self-driven learners and problem solvers.

Started as a self-funded effort, Science Ashram had to face a fair share of problems before it could scale up and become successful. “Since we were not a tuition centre, people took some time to understand what is tinkering. Initially, in the first three months we didn't even have a single kid. By September 2014 we had three children and, by December 2014, we had 10,” recalls Dhurva.

Structured to conduct one class every week, children who participate in the tinkering labs of Science Ashram are guided by a diverse team of people who come with a meritorious academic background themselves.

Today, Science Ashram has its tinkering labs in Bengaluru, Mysuru and Coorg, where nearly 3,000 children have participated in different programmes.

“Keeping count of increasing agricultural produce has been a major concern of a Sumerian king. You, as a scientist in his court, are required to design a calculator (remember, you are in 2500 BCE),” reads one of the sample problem statement that Dhruva shares with me. Many such thought-provoking problem statements motivate students at Science Ashram’s tinkering labs to come up with the most effective solutions through their innovations.

As Dhurav explains, "Most of these problem statements are also designed in a way to encourage students to research more along historic lines. Once they know the context well, they are able to come up with appropriate inventions".

Divided into four separate phases (mechanical and physics-related problem solving, electrical-related problems, electronics and programming) the maker classes work on a subscription model, wherein parents can enroll their children (ranging from 10 to 18 years) for two months to one year.

Our tinkering lab is open and free to every kid who wants to tinker and devise solutions to various problem statements. They are allowed to use all our tools, ranging from simple hand held tools to 3D printers, says Dhruva.

Gamified learning is our USP

One of the most unique processes that has added to the success of Science Ashram’s tinkering labs is their novel ‘virtual currency’ system. So, here’s how it works: Once the problem statement is chosen each child is supposed to choose appropriate tools and materials to develop a relevant solution. To rent these tools, the children have to spend PANAs, a specific amount of virtual currency that is credited to their account on the digital learning platform.

So more PANA saved means they can use better tools for future projects, says Dhruva, explaining how the entire system is designed to encourage students to use their tools judiciously to come up with the most efficient solutions.

In the initial stages, children are also provided knowledge-based support in the form of scaffolding content like videos, models and pictures explaining various science mechanisms. However, this is also charged in PANAs. “This will make them to try and learn the concept and principle all by themselves using less help,” Dhruva adds.

The innovative way ahead

Having received an angel investment of Rs 2 crore in 2016, Science Ashram is also gearing up to open two new tinkering labs this year. In the next two years, the budding startup aims to mark its presence in all metros and Tier II cities.

The founders of Science Ashram are also in talks with NITI Aayog - Atal Innovation Mission, to collaborate in setting up Atal Tinkering Laboratories (ATLs) across schools in India.

Set up as a pioneering project, Science Ashram is already a hit among inquiring young minds and their parents. “Students are just hooked to learning by tinkering. We have children who have been part of Science Ashram for the last four years, including some homeschooled ones,” shares Dhruva, explaining how the promising teengers have built IOT devices which can control the lights and fans, online games, electric shoes etc...

Ask him what their future plans are like and Dhruva signs off saying,