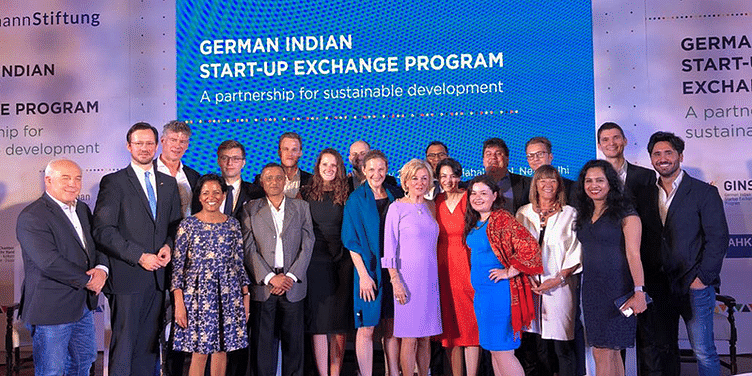 The partnership aims to accelerate cross-border innovation and help both sides take advantage of each other's strengths.

With the formal launch of the German Indian Startup Exchange Program (GINSEP) in New Delhi on February 23 in the presence of Union Commerce and Industry Minister Suresh Prabhu, the stage is set for startup collaboration between the two nations to play out.

The launch marked the end of the five-day tour of India of the 24-member delegation under the German Startups Association. The delegation, which comprises German investors, entrepreneurs, and Federal officials (most of whom were visiting India for the first time), was exposed to the budding startup ecosystem in India, especially in Bengaluru and Delhi.

To set the context, here’s why India is becoming one of the favourite destinations in the world, and no, the reason is not just the Taj Mahal.

Here are some numbers to chew on:

Calling it India Unlimited, Managing Director and CEO of Invest India Deepak Bagla made an impassioned pitch of the India story at the launch of the event.

Giving an example of the “scale, size, and pace at which the growth has happened,” he said the first trillion economic growth happened in 60 years, the second trillion mark was achieved in eight years, while the third will happen in another six years. “As the second largest consumer internet market by 2030, India will grow to be a huge purchasing power,” he said.

Vice Chairwoman of Bertelsmann Stiftung Liz Mohn in her opening address stressed upon these opportunities for the German investors and startups. Indicating to the growing concerns by nations across the world on the turmoil caused because of job losses, she said this was an opportunity for the entrepreneurs from both sides to create more jobs. “The young people need to know what is happening in other countries. And though our desk is our world today, nothing can replace face to face interactions. It is important that we talk to each other,” she said.

India is already building cross-border partnerships with other thriving startup ecosystems in the world like in Israel, Silicon Valley, and Japan, and most often the challenges that any such collaboration faces is the ease of movement between the two countries.

Getting quick visas is still an issue, and those involved on both sides feel this hampers collaboration. In an earlier meeting with the Invest India team, the German delegation raised concerns about the high cost of travel between the two countries and how that can hinder entrepreneurs from travelling back and forth.

Angela De Giacomo, Investment Manager, Bissell Family Office, and the brain behind the GINSEP, said the work for laying the foundation stones of this initiative began nearly two years ago when she approached the German Startups Association.

“We felt that it was important that the Germans know about the big and exciting market here in India and we give an opportunity to the German startups to enter this complex market so that they have a soft landing in the country and to allow them to succeed. With the help of the German Ministry of Economics and Energy, we got the push to start it now and we are happy to be launching it,” she said.

The German Startups Association has 750 startups and 50 corporates as its partner. In their interactions with startups on their trip, the delegation learned that there were three expectations from the Indian startups’ side, namely: Technology collaborations, learning from the Germans on their precision, partnerships (how to take their innovations to Germany).

Also Read: GINSEP kickstarts India tour amid heat, dust, and much startup love on day one

Addressing the Indian entrepreneurs, Mirco Dragowski, MD of the German Startup Association, said, “There are challenges when startups want to establish a partnership with corporates, and through the association, we are trying to iron that out.”

The top parameters that German angel investors look at to invest capital or sweat in India, would be to build trust and fruitful partnerships. Burkhard, an investor travelling with the delegation, said, “Though I have now come here and seen first-hand, I have to make up my mind on how to find the best way in order to be able to partner with an entrepreneur even though I may not be able to see them on a regular basis. So there needs to be an understanding and trust on both sides so that we can overcome hurdles together when they occur.”

Though, of course, it can be argued that there is some bad news as well, as pointed out by Raj Chengappa, Editorial Director of India Today. “The bad news is that the ecosystem is poor, it lacks pioneering innovation, complex regulatory system and tax burden hamper starting up. And of course, failure is still a big hurdle,” he said.

Interestingly, Angela’s comment that “India never stands still even in a traffic jam,” tells a lot about how she has correctly caught the nuances of a country that is always on the move. Thus, it is no surprise when the best piece of advice to Indian startups comes from her. “If you want to attract German investors to invest in your businesses it may help to have an Indian investor who is well reputed and trustworthy,” she said.

Her suggestion to the Invest India team was to have closed group discussions and to avoid huge events. “Have smaller round tables or dinner gatherings where you connect German and Indian investors so that they have a common platform, because the moment a German investor trusts the Indian investor, the Indian investor will do what the angel investor from Germany cannot do, namely the handholding and whatever requirements are there to help the startup. I think that is very crucial.”

She pointed out that the GINSEP vision got a boost after Indian Prime Minister Modi and German Chancellor Angela Merkel met last year. “Their joint statement that India and Germany should collaborate opened a lot of doors for us,” she added.

As the delegation heads back home, the startup stakeholder from both sides have a bigger task at hand to ensure that the door remains open.