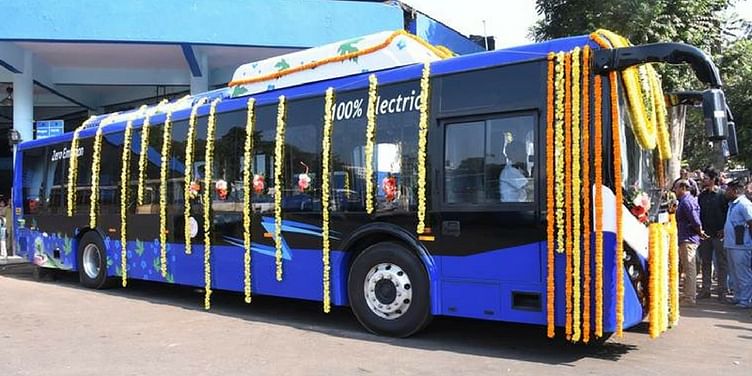 Kadamba Transport Corporation Ltd (KTCL) has conducted a trial exercise of the first electric bus in Goa state recently. If this turns out to be fruitful, Chief Minister Manohar Parrikar said that 100 more environment-friendly and electric buses will run on Goa roads soon.

These buses are run solely on electricity and have zero emissions whatsoever. The optimum charging time required to fuel these buses is only four hours and the buses are charged at the charging point at the KTC Bus Station in Goa. Two models of these buses, eBuzz K7 and eBuss K9 and being considered, which have seating capacities of 31 and 39 respectively. Upon a full charge of the bus, the maximum distance that could be covered by each bus is 250 kilometres at a rate of 70 km per hour.

Goldstone Infratech Ltd, a company based out of Hyderabad, has supplied the buses to Government of Goa at a price of Rs 2.45 crore. Chief Minister Parrikar said that further negotiations will happen with the company soon after the trial run is finished successfully. The first trial-run-bus will travel through different routes for the next 45 days before a conclusion is made.

The chief minister said the state will negotiate rates with the company post the successful completion of the trial run. The bus will ply on different routes for the next one-and-a-half months on a trial basis. However, the company is prepared to push the buses to the government if the party is considering the running of buses on the basis of kilometres.

According to a report by Times of India, Parrikar said,

"We will put the condition that the driver must be Goan. Depending on the success of the trial run of this electric bus, the government will go for anything between 50 and 100 buses."

"We are looking at all these measures as most developed nations have completely shifted to these models from petrol and diesel, as far as public transport is concerned. We have been studying these proposals for a while. Now, all these will be put to test, and a study report will be called. It will be based on the findings which will be made on the combination of bus models."