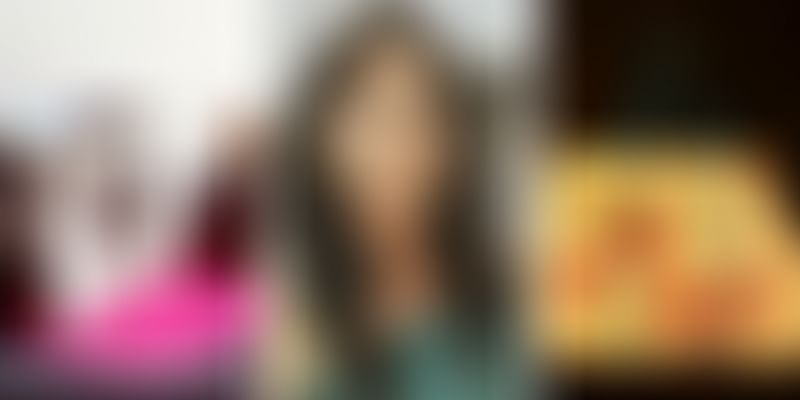 Architect Kokila Deshpande runs Ayvakta, an NGO that is empowering rural and urban women and promoting an organic lifestyle with its flagship product – durable newspaper bags.

Most of us start the day with a newspaper and a hot cup of tea. But the life of the newspaper is over much before the day comes to an end. It is stacked up with other old newspapers; at the end of the month, the pile is sold off to a raddiwala.

Old newspapers are recycled and made into paper bags, it’s true, but they are often unable to compete with plastic bags when it comes to durability.

Now think: what if these newspapers could be turned into reusable and durable bags?

Doesn’t seem possible? Mumbai-based Kokila Deshpande is doing it. This 36-year-old architect runs Ayvakta, an NGO that offers newspaper bags that are completely environmentally friendly even when discarded. For the special folding technique means the bags need no glue, adhesive tape or metal pin to be made.

The bag is reinforced with fabric – clean, unused waste – and can carry up to 5 kg of dry goods. The makers of these bags are home-bound rural and urban women, who have learned new skills. Most of them are first-time wage earners.

Creativity is the key

Born in Hubli, Karnataka, Kokila moved to Pune where she completed her schooling and graduated as an architect from Bharatiya Kala Prasarini Sabha’s College of Architecture. She says that she always wanted to be an architect.

“It may sound a little cliched, but I was in Class 2 when I participated in an elocution competition on the topic ‘What you want to be when you grow up’. It was then that I first spoke about being an architect,” she says.

“Moreover, there were other things too. I was good in arts and crafts, had an inclination towards science, loved playing outdoors, and in nature. These things led me towards architecture. This field has been an extension of me; I thoroughly enjoyed myself as a student of architecture and am doing the same as an architect.”

Kokila went on complete her post-graduation in urban design from Centre for Environmental Planning and Technology, Ahmedabad, in 2005. She then joined Mandviwala Qutub & Associates and worked for there almost four years.

“My heart was in architecture. I loved creating something whether it was office or home. As an architect, I was always concerned about the end users, the people who would live in the places I designed,” she said.

Over a weekend in 2012, Kokila was playing around with old newspapers, trying to create something new.

She says, “I ended up making a solid chair that could take some amount of weight. Being in the field of furnishing, I have always opted for more organic lifestyle. Therefore, I thought of exploring the medium to make something more useful - like a carry bag.”

Say no to plastic

“While we were growing up in the 1990s, not many plastic bags were used. But now, from e-commerce companies to the smallest vendors, everybody is using plastic. The problem with plastic is that it does not decompose for hundreds of years. On the other hand, recycled paper bags or brown bags are not very convenient - they can only be used to carry light things.”

Looking at the pros and cons of plastic bags and recycled brown bags, the architect dissected the design and combined the efficiency of both to create a functional newspaper bag that could carry loads up to 5kg.

These bags have handles made out garment factory waste; these are looped under the bag and carry the full weight of the object in the bag.

The cycle of recycled paper

Kokila says,“Newspapers generally make their way to raddi. But if we used glue or tape, the newspaper bag would end up going to landfills rather than being recycled. This would lead to cutting of more trees and would ultimately adversely affect our own environment.”

She explains how her newspaper bags are more energy efficient than brown paper bags.

“We used our resources efficiently. Brown paper bags are recycled from newspapers but consume resources like water and electricity in the manufacturing process. Meanwhile, our newspaper bags are resource intensive. We have taken a step back. The newspaper is still there; we add more value to its life. Before it goes for recycling, it has lived two lives - one as a newspaper and the other as a bag.”

Kokila thought of the idea of newspaper bags over two-and-half years ago, but couldn’t do much about it as she was working full time.

But she kicked the project off in 2015. She started by making flyers for the product and sent out emails to more than 50 people in the hospitality and food industry.

“There was an organic wave in the country, so I researched that there would be many takers and arrived in the market at the right time. In 15 minutes after sending out the mail, I got an order of 200 newspaper bags. However, the first order was issue as I didn't have the resources,” she recalls.

“I was very lucky to have a sensitive and patient client,” Kokila adds.

For Kokila, the biggest challenge was procuring the raw material as she didn’t know where she could source old newspaper other than the raddi shop. Even here, buying old newspaper was expensive. Kokila also did not want to buy fresh fabric for the handles for it didn’t “fall in line” with the idea. She decided to embark on a mega hunt to procure her supplies; she now gets her newspapers through donations.

Kokila decided against beginning with a factory setup since she wanted homebound women in urban and rural areas to benefit from this project.

“Women are often homebound because they have to take care of the elderly or children. These women have low self-esteem as they are not able to contribute to the household income. But now, they can make some money by using their spare time to make bags,” she says.

Recalling a time when she was working at Mandviwala Qutub & Associates, she recalls that a housekeeping woman came up to her and sought work for an acquaintance.

“I was not able to give her a job. But this remained with me. When I got the first order, I went back to her and trained her to make newspaper bags,” she says.

Today, 30 to 40 women are working for Ayvakta. Kokila has also tied up with other NGOs in Maharashtra so as to easily identify women who could work with her.

“Before I began work with these women, I interacted with them and conducted a workshop on why organic products, what is climate change and also learned about their lifestyle and family. Many of them were very hesitant as some of them had never worked. I had to bridge the gap between urban and rural,” she says.

“For me, it was not a business venture but a personal learning at various levels. As a team, we had a collective energy when we had a sizeable delivery; we all get excited about going bigger. I tell them about the appreciation from our clients,” she says.

The price of a newspaper bag made by Kokila’s NGO depends on the size; they are priced between Rs 6 and Rs 20 per bag and are available in more than 20 to 30 designs. The Ayvakta bags can be customised according to size, design, and branding, and sport a tag that advocates recycling.

Kokila invested her savings in this business and is now seeking funding. She says her product is completely handmade and labour-intensive. She now also has machines that reduce one-third of the labour involved and is looking for more customised manual machines to make production easier.

The Ayvakta also offers cushioning pouches made out of fabric waste, which can be used instead of bubble wrap by e-commerce companies that ship fragile items like glasses and mugs.

Nothing is waste, she feels, as it might be raw material for a new product.

Keen to make an impact in the packaging industry, Kokila says she’s more bothered about change than the business.

“Business had to happen; there was no other way,” she says.