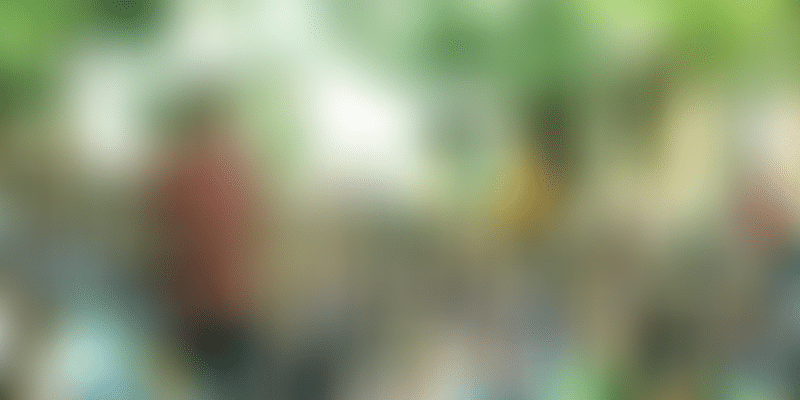 Naga Sravan Kilaru recently won the highest award in the country given to youth for ‘active citizenship’.

Twenty-four-year-old Naga Sravan Kilaru from Vijayawada firmly believes that ‘a democracy which is not participatory is not a democracy at all.’

Sravan was like anyone else around him during his teenage years. But his journey into politics and active participation in the democratic process started after a brief meeting with Anna Hazare. And today, Sravan finds himself working arduously towards youth involvement in government policies and holding lawmakers responsible.

Sravan’s journey began in the year 2011 when he met Anna Hazare at the age of 17.

“Anna Hazare’s anti-corruption movement made me question — if a 74-year-old is so concerned about the future of his country, being a 17-year-old young boy, who has another 50 years to live in this country, how concerned should I be?” says Sravan.

Sravan started forming a group of young people and campaigning on Lokpal, thus beginning his journey towards bringing accountability in democracy.

During the Lokpal campaign, Sravan organised multiple walks, and spoke to over 40,000 students explaining to them the Lokpal Bill. He also collected close to 25,000 signatures in support of the Lokpal Bill to be sent to New Delhi.

Although the Lokpal movement collapsed within a year, Sravan continued to strive towards a participatory democracy.

“I realised that all I needed to do was to make people think, and when we can give them the information and the ability to think, they take the right decision. Thereafter, I started to work on improving citizen partnership on governance issues and my focus has been on making our democracy a participatory democracy from its present state of just being an electoral democracy,” says Sravan.

Soon after schooling, Sravan shifted his base from Vijayawada to Bengaluru to pursue a bachelor’s degree in Mechanical Engineering. In Bengaluru, he got to meet many people from various regions and with a similar mindset.

Sravan wanted to raise a strong voice for the cause, which eventually led to the formation of Revolutionising India through Social Empowerment (RISE) — a non-profit organisation for active youth participation, awareness, and empowerment.

In September of 2014, Sravan decided to launch a platform for youth in his hometown where they could come together and discuss issues of public interest. ‘Vijayawada Needs U’ came into existence to empower youth and provide them with an opportunity to be a key participant in bringing social reforms.

To change the notion of representative governance by promoting participatory governance, the platform has been organising various campaigns and workshops for the youth of the city. It also conducts mock parliament session in an attempt to encourage youth to deliberate on public issues.

VnU has also been working on making lawmakers feel more responsible towards their citizens by evaluating the state MPs on various parameters. Recently, VnU released a performance report card for 24 Andhra Pradesh MPs. Each individual report contains details of attendance, questions asked, debates participated, funds allotted and spent, and bills of private expenditure. As per the reports issued by VnU, merely 14 MPs have more than 80 percent attendance rate.

Sravan and his team filed various RTIs, besides raising awareness on the importance of RTI as an effective tool in democracy by organising walks and conducting seminars.

VnU has 15 active team members and around 100 supporters and more than 350 alumni from different colleges across the city.

On January 12, 2018, Sravan received the National Youth Award from the Ministry of Youth Affairs in the opening ceremony of National Youth Fest at Jaipur.

The award is given to young men and women every year in recognition of their work in the field of national development and social service. Sravan was chosen this year, for ‘active citizenship’.

For Sravan, the award speaks of the sleepless nights and the challenges he has faced in his journey for social change.

“I feel very honoured to receive this award from the government, as one of the 25 awardees. I also got to learn that I am the youngest in this batch of awardees,” he says.

Sravan holds a diploma from CATO institute, one of the top 10 think tanks in the world. Besides, he is the Co-founder of SatSure, a tech company trying to solve the problems of farmers. Recently, he also participated in the United Nations Youth Assembly.

Sravan is now working on parliamentary research with a few MPs and advocates for youth rights and policy. In every parliamentary session, he has been actively giving assistance to around eight MPs.