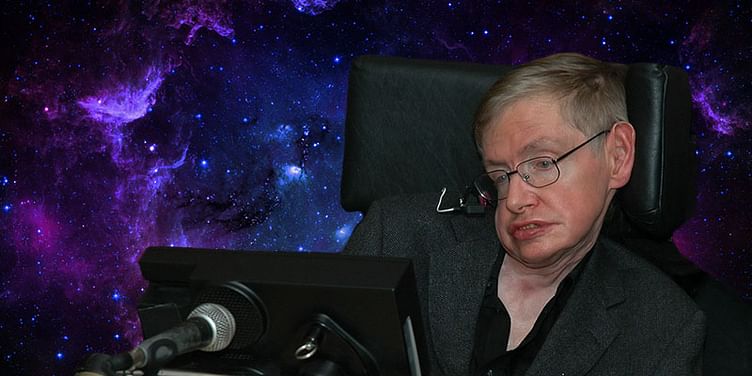 The death of physicist, cosmologist, and author Stephen Hawking has left a big black hole in the world, but the indefatigable man will live on through these five life lessons.

Last week the world lost one of its finest minds when Stephen Hawking passed away. This was a man whose name was synonymous with genius, who helped humankind unravel some of the greatest cosmic mysteries. His whole life was a stirring example on many fronts, which is perhaps why restricting his legacy only to the realms of theoretical physics and applied mathematics might not quite do justice to his epochal journey.

His was a tale that has nudged myriad other storylines upwards in diverse fields. And even in the domain of startups, it might just help some budding companies make that quantum leap. Here are but a few ways in which entrepreneurs can draw some heart from a person who was all that.

Early in his twenties Hawking was diagnosed with motor neuron disease (ALS). This left him unable to make full use of his limbs for the major part of his life. Add to this the fact that he soon after lost his voice, and was only able to communicate using a machine. But those events never held back his indefatigable spirit. He refused to think he was handicapped in any manner. In the end, his long list of accomplishments proved his indomitable will did translate into outstanding work.

Looking at his case, most of the barriers or roadblocks businesses face surely seem a trifle less intimidating. Perhaps the seed funding is not yet in. Maybe the right personnel seem difficult to recruit. Probably the competition comprises established big players. Many startups often feel like they are about to enter black holes. But it is often the manner in which the core team dives in, with almost blind faith in their abilities to make it to the other side, that makes the difference between those organisations that are sighted again at the event horizon, and those who are lost in the oblivion.

Use deadlines to trigger productivity

When the doctors initially told Hawking he had ALS, they gave him only two years to live. Whilst he proved them wrong by soldiering on, the pall of death always hung over him. This, he believed, added an unflinching dedication, focus, and speed to his work. He always felt he had to make the most of the limited time he had on this planet. He wanted to grapple with the most fundamental questions of them all, and anytime spent not doing that, was essentially time wasted. This attitude perhaps explains to some extent why he was able to get so much done.

The common reaction is collective groans whenever a tight deadline makes an appearance. However, there is something about having to stretch beyond one’s normal efforts, which always brings out the best in people-from Olympic champions to white collar heroes. Deadlines channelise human endeavour, especially in corporate settings. They infuse activities with a sense of purpose and dynamism. The ticking clock might play havoc on blood pressure levels, but it also brings along a surge of adrenaline that ensures light years get covered on the project, metaphorically speaking.

One of the complex ideas Stephen Hawking helped propound was the existence of many universes at the same point in time. This “multiverse’” theory implied that the same entities or people might be taking different turns at key moments on their life paths (on other worlds), making for vividly imaginative “what if” possibilities. Perhaps hearteningly, if this theory holds out, there might be a universe where the legendary scientist might still be very much around.

Starting any venture is a pursuit of passion fraught with uncertainty. In fact that is the main emotion one is trying to gain control over. While it is impossible to eliminate it entirely, it certainly can be mitigated. Borrowing a leaf from the multiverse perspective, it might be instructive to play out different scenarios mentally (either individually or with the team), to try and sense what different outcomes might feel like. Our minds are wonderful time travelling, imaginative machines, and this is something right up their streets. What might happen if the competition beats us to the market? How could we combat depleting resources? What will be the change in conversation that our new service will cause? Exploring these lines of thought might just leave teams better prepared to face the future. And enhance their chances of success significantly.

At one time science was confined to laboratories. But thanks to the efforts of Stephen Hawking, Carl Sagan, Richard Dawkins, Neil deGrasse Tyson, and others, it has now entered many living rooms across the world. These new-age scientists firmly believed that communicating with the masses was also part of the job. Hawking in fact went the extra mile, not only penning books for adults but also for children. He even featured on popular shows like The Simpsons and The Big Bang Theory, sang along with Monty Python and Pink Floyd, and even had a Hollywood movie The Theory of Everything based on him. In studying the stars he had truly become one in the public eye himself.

This might be “the age of individuality”. It is a fact that audiences need a personality to follow, in just about any domain of human existence. This trend is reflected in more and more business leaders making very public appearances, being available to the media for interviews, and interacting directly with the public. Founders and core team members are integral components of the brand perception. Think Virgin sans Richard Branson, Apple without Steve Jobs or Infosys minus Narayan Murthy or Nandan Nilekani, and one gets the impression something is distinctly missing. Audiences need human interaction, probably in the time of proliferating technology, more than ever before. Putting a face to a startup might just induce the beginnings of a smile on the market visage.

Make space and time for laughter

If there was something even more potent that Hawking’s intellect, it was his sublime sense of humour. He was blessed with a cheerful disposition even in the worst of times, and a caustic wit which was delightful. Scanning his speeches and interviews on YouTube are sure recipes to bring one many chuckles. He famously said, “Life would be tragic, if it weren’t funny”. And it was this remarkable perspective which kept him going despite the odds.

The high-pressure world of startups could do with generous doses of laughter. Laughter dissolves barriers between people. It stimulates lateral thinking. It dispels stress. It makes for happier employees, customers, and companies. It even brings smiles to the balance sheet. And if you don’t believe me, just take the word of one of the greatest scientists of all time as emphatic proof.

To conclude, these are but a few ways in which the example of Stephen Hawking can inspire modern day organisations. There are surely infinite more. Someone, whose story will be held up in time, as a stirring tale of what the human spirit can achieve, is a presence that should always be welcomed into boardrooms. For he might have penned A Brief History of Time, but he truly left us with several lifetimes worth of inspiration.