The possible good, bad, and ugly scenarios in the future of IT 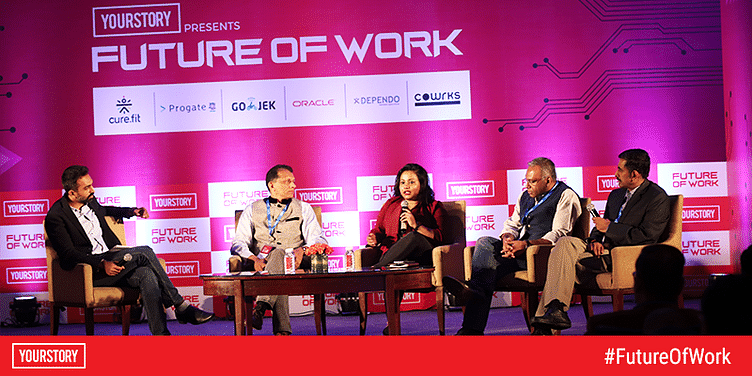 There is no denying that Indians have made rapid strides in the world of technology both in India and around the world. Microsoft and Google currently have Indian origin CEOs and companies like Infosys, Wipro and TCS put India on the map as a country with strong tech talent.

But not all is right in the world of technology globally and in India. There are present and future threats. YourStory recently hosted a conference with the central theme, 'Future of Work', in Bengaluru. Here are some of the highlights from the session that focussed on the future of the IT.

The global IT opportunity

Talking about one of India’s current problems, Krishna Kumar, VP and Head - Global Delivery, Sasken Technologies, noted,“We have a perennial problem with freshers, only two percent of them are qualified for engineering jobs.”

Sagar Paul, Director, Client, Services & Strategy, ThoughtWorks, too had a similar observation. He said,"We have been in IT for 25 years... but I don't think we've been able to penetrate the education system... the people who are passing out, I don't think they are adequately trained."

Talking about the possible root causes, Sagar noted that every generation is generally brought up with a similar mindset. Making an interesting analogy connecting Hindu mythology with present ambitions, he noted,

Nruthya Madappa, Managing Partner, The CoWrks Foundry, noted India has one of the youngest workforces in the world, with two-thirds of our population under the age of 35. Most of the workforce is tech savvy, look to find meaning in challenging work and are also capable of adapting to change. But problems still exist. Nruthya believes that the reason is a lack of strong institutions and support systems to guide youngsters. She said,

We are taking the sledgehammer at the ways things are done, but don’t think our institutions have evolved to train employees and take things like AI into the workspaces.

Kamal Karanth A, Co-founder - Xpheno, stressed on the need for companies to train new employees well and re-skill existing ones. But this brings up a conundrum. The challenge is to re-skill employees while also looking at current financial goals like reaching quarterly targets. He said,

Leapfrogging and preparing for the future?

Looking at the bigger picture, Krishna noted that when you take technological evolution on one axis and customer needs on another axis and juxtapose both, you see that the way the industry works is completely different in many sectors.

For example, there are spaces like the airline industry where technological evolution and customer needs have almost stagnated over the last 30 years. Krishna spoke about how the booking system built on the GSM technology in the 1980s is still around. Talking about legacies, he noted,

Don’t know if the people who wrote the code(for GSM) are still around. But that should be a goal too. At Sasken we try to write code that will still be relevant till 2050. Given the current trend, the code that you write will likely outlive you....

But on the global front, India lags behind some of the developed countries in terms of innovation and implementing technologies in the real world. Nruthya believes that all of us want to learn and accelerate development, but very few are able to do it. But catching up is not an impossible task. Nruthya cited an example of how countries like India leapfrogged into the mobile world, without really going through the PC wave. She said,

India has raw talent, we are not too far behind the developing countries and we can catch up!

Talking about the future of work, Kamal noted that the obsession and craziness about technology and what technology will bring is probably causing hysteria among people and hampering our future prospects. Sagar too noted that while some humans may lose their jobs to automation and artificial intelligence, the future is not dim. He said,

AI will coexist with humans in the future. But realities will be different from where they are now. AI is an actor that can act for you.

To summarise, the Future Of Work in IT is about being in the game of learning fast, working with people (and machines?) with different skills and constantly re-skilling oneself to stay ahead.