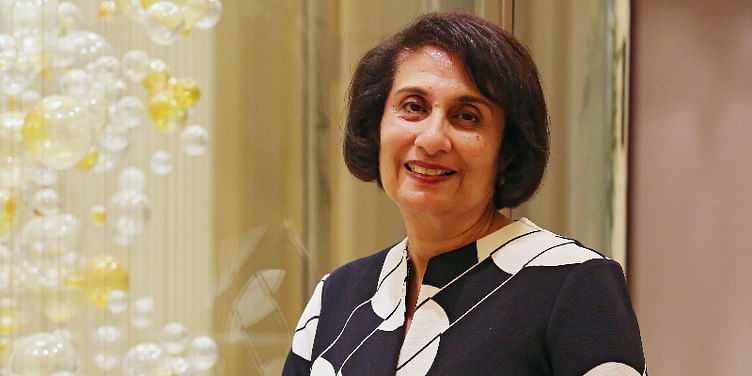 Dr Rohini Anand, SVP Corporate Responsibility and Global Chief Diversity Officer at Sodexo, believes businesses must focus on getting women back into the corporate workforce, and work on advancing them to senior, more prominent positions.

At Sodexo’s diversity and inclusion seminar in Mumbai last month, marketing and human resource chieftains of prestigious companies flocked to the stage to thank Dr Rohini Anand for sharing the life lessons she had accumulated over three decades so candidly.

That’s where I got my first piece of evidence that Dr Rohini is a true-blue believer of all that she champions at work. Her emotional labour was hard to miss, as she took the time out to converse with everyone, including me – a much younger, smaller fish in comparison – and relay meticulous wisdoms about concerns spanning life stages, companies, and even industries that weren’t hers.

My second piece of evidence, of course, is her stellar journey.

Her alibi checks out, too - Sodexo’s numbers on diversity are not only at their personal best, but also one of the best in the business. This is a success story that their SVP Corporate Responsibility and Global Chief Diversity Officer has been chipping away at since 2002.

The business case in diversity and inclusion

Rohini holds an undergraduate degree in history, and a PhD in Asian studies from the University of Michigan. Her personal experiences as an immigrant in the US led her to her graduate research on the movement of people and identity formation. She taught for a while and planned to stay in academia; but she soon realised soon that it wasn’t where her heart lay. She then did a “mini MBA,” as she calls it, and took a job at International Playtex in marketing.

She went on to work in corporate America for many large organisations, leading cross-cultural consulting verticals before joining Sodexo in 2002.

In that duration, she had a child and therefore, decided to off-ramp. She moved overseas with her husband, to India, but returned to the US shortly after, and started reintegrating herself into the workforce. The job she first took up was at a not-for-profit HR and organisational consulting company, where she “really cut (her) teeth into the profession, learnt the nitty-gritties and decided to make a career” out of it.

Rohini soon had the opportunity of meeting the (then) CEO of Sodexo, Michel Landel, and his commitment drew her into the company’s narrative and their vision. She had never had a mentor till then, only great peers and allies. But the involvement of her “unspoken sponsor”, Michel Landel, in her career, as he broke down doors and created newer opportunities so she could leverage her skillset, was a watershed time in her journey.

“I feel fortunate to have had a sponsor like Michel Landel, who offered me the right platform at the right stages in my life. He created access for me, and pulled me in whenever cultural change/transformation was required on any topic. So you see, the important thing is to have a mentor externally and internally, one who will guide you, assist you, and show you the way. And, then of course a sponsor, who advocates you, looks out for opportunities for you. Having both is important at different career stages,” she shares.

It was 2002, and Sodexo was just crafting their diversity and inclusion function at the North America level. Rohini had her work cut out for her. “At that time, there was a lot of resistance to the topic. We had very few women in leadership roles; none in operations or P&L roles. My job entailed building the company’s diversity strategy, particularly in human resources, and in creating an effective diversity scorecard to measure the company’s progress. It’s been a journey; an interesting one since then -changing people’s mindsets and helping them understand the business benefits,” she recounts.

Rohini came to lead not only the diversity and inclusion functions in North America, but also that of the company overall at the global level, thus looking at over 80 countries, and over 4,30,000 employees.

Various novel initiatives were undertaken under her, but Sodexo’s gender-balance case study, which has now amassed over five years’ worth of data, has been one of her magnum opi. It determines that 40-60 percent is the ideal diversity mix to deliver sustained business outcomes.

Another initiative close to her heart has been “role-modelling.” “We recruited the men in our company, the leaders, to mentor high-potential women talent. And then lastly, we worked on making the women confident enough to take up high visibility and challenging roles by offering them the required flexibility and development planning,” she explains.

“The peers and allies who once demanded a business case on the topic are now strong advocates of the subject. It’s extremely satisfying to see that diversity and inclusion is today part of our brand promise; it’s an engine of our culture and a differentiator for business,” she says. “Our target is to have 100 percent gender balance, or teams with 40-60 percent women, across management by 2025,” she adds.

Three decades worth of insights

According to Rohini, the biggest roadblocks to diversity and inclusion are business buy-ins, followed by a leaky pipeline. “At some point in the pipeline, women off-ramp. Companies need to do a better job to assist them and get them back into the corporate workforce, without impacting work-life balance,” she states.

“Both these areas of focus require shifting mindsets; in the former, it extends to the family and partner and addressing gender roles, and in the latter, to addressing stereotyping of women in certain roles,” she says.

Rohini swears by role modelling, sponsorship, and mentoring to overcome these barriers. Just as important is the top level management’s vocalising the need for diversity and giving it top priority. “Commit to gender diversity, communicate it through the organisation, and set measurable goals. Based on our gender balance study, our CEO has established a target of 40 percent women in senior leadership ranks by 2025; currently we are at 32 percent. And this is linked to 10 percent of our executives’ annual bonus. This target has been cascaded in India by Country President Rishi Gour,” she explains.

“We have also stated that 100 percent of our countries will engage in initiatives to empower women in the community by 2025,” she adds.

In her own career spanning three decades, she has witnessed a transition in the thought process that precedes hiring practices in organisations. So, where do they feature on the inclusivity spectrum currently? Previously, she explains, hiring women was mostly to do with compliance, and fulfilling a particular quota requirement or law, checking a box, essentially. Now, she believes the mindset has changed –it has dawned upon managers that diversity fosters creativity, diversity of thoughts, and makes actual economic sense.

In addition to her current role, Rohini serves on the boards of several organisations, including the Gay, Lesbian & Straight Education Network (GLSEN), Community Wealth Partners, the Catalyst Board of Advisors, the National Organisation on Disabilities (NOD), and Sodexo’s Stop Hunger Foundation board.

“I am entirely committed to the topic of advancement of women. And I feel there is a lot more that needs to be done. And when you talk about inclusion, it’s more than just gender. The issue of multiple generations working together – how do we integrate Gen Z into the workplace; religion and people with disabilities are also equally important,” she says. Clearly, Rohini has a long way to go.