At Rajasthan IT Day, the spotlight was on idea generation and validation for startups 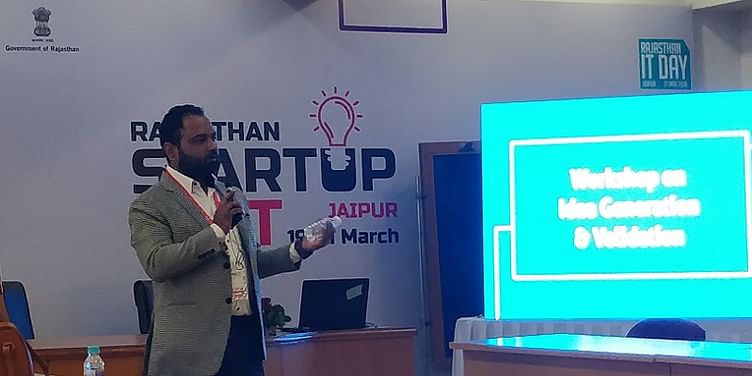 “Once you find a problem that exists in the market, talk to people before figuring out a solution. This will help you understand it better and thus build confidence.” These were words of wisdom from Sandro Stephen, Regional Head of North India Operations at Indian Angel Network. He was speak at a workshop on "Idea Generation and Validation" as a part of the Rajasthan IT Day held in Jaipur on Monday, March 19.

Elaborating on the topic, he said that identifying the target market was of utmost significance. “May be only 10 percent of the larger society will be your target. You have to experiment with a critical mass before you even go to an investor,” he says, adding that no investor will be too keen to give money at the idea stage.

Instead, he recommended that aspiring entrepreneurs find co-founders and pool in money together for the initial stages. “Once the product is developed and you get a market validation, you can go to investors,” he said. He went on to add that if you could convince your own family and they believed in your idea, you could pitch to investors.

Startups have different revenue models depending on the sectors and whether they follow the B2C or B2B model. For instance, generating revenue on day one is possible for streams like products (in retail). “It is not like Facebook, a content platform where you should build engagement. Content platforms - like YourStory or Little Black Book - need a large audience so that they can make revenue out of ads,” Sandro said.

On mentors and investors

Sandro emphasised that mentorship is extremely important. “Always look for mentors who understand your business, and are experts in the domain. For YourStory, for example, mentors can guide on how to engage readers. Some mentors are ready to mentor for free and be part of your journey,” he said.

Advising caution on initial external investments, Sandra said sometimes seed investors tend to take large equity, making it be harder for the startup to raise funding later. For early stage ventures, he said it would be better to approach accelerators and incubators that would provide seed funding, rather than investors, at very low equity. “It is not wise to give away 15-20 percent equity of the company in the initial stage,” he stressed.

The Indian Angel Network has invested in Mumbai-based Box8, which provides lunches and midnight meals for homes and offices. They target an audience with no time to cook, and those staying away from family. They have also invested in Jiyo Naturals from Bangalore, which follows a similar model.

Giving these examples, Sandro said, “Once you understand who is your target market, you have an option (in B2C). You may log into the app and place the order, which I think is not a proper way to do it, or create communities. For instance, in college campuses you can put up brochures and posters to build a community and create validation (to see if it will work). Just put a contact number on the posters; there will be an immediate response. Better, talk to the dean and do it in a more structured way, partner with hostels in B2B model, or deliver the food on campus from a base kitchen outside.”

Sandro suggested asking people who eat at the canteen directly what they like and dislike to understand why they would come to you. “You have to offer them something better. Also speak to them about price, even Rs 10 can make a difference. Cheap doesn't mean better. Even if its Rs 20 more, quality matters."

Priyanka Ahuja, Director of Communications, Startup Tunnel, added, “To achieve growth and scale quickly, you need to have the right business model. You should offer what the existing competition is not able to deliver.”