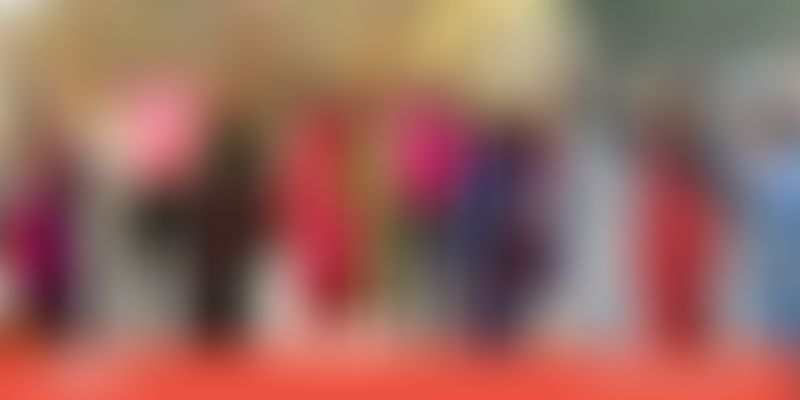 For International Women’s Day, YourStory spoke to a few fitness enthusiasts who are challenging the status quo when it comes to fitness wear.

In May last year, 78-year-old Usha Soman took to running on the streets of Manor, a district near Thane. Clad in a saree, this biochemist and former teacher went onto challenge how fitness is perceived, and shattered the norms on age and attire when it comes to working out.

A picture shared by son Milind Soman shows her running alongside him, and in less than a week, she broke the internet when she took up a plank challenge, again in a saree.

At a time when dressing up for gym and workouts is an #OOTD (outfit of the day) activity in itself, a few examples stand out for not playing by these rules. On the occasion of women’s day, we spoke to a few fitness enthusiasts who, like Usha Soman, are challenging the status quo when it comes to fitness wear, and are sweating it out wrapped in all of six yards.

A few days back, Bengaluru witnessed 120 women who merged clothing and fitness while running a marathon. As a joint initiative by Pinkathon and Taneira, Saree Run was organised to raise awareness about women’s health and breast cancer. Heeya, a clothing brand which has put the spotlight on lesser known crafts and rare handlooms of India, joined the campaign, driving home the point that clothes should not be a deterrent to running and fitness.

Women in handloom sarees waved at onlookers as their six yards took away the limelight on a Sunday morning.

Bhumika Patel, Head Coach-Pinkathon, Running Coach-CureFit, was leading the bandwagon. In a conversation with YourStory, she says that for most women, wearing sportswear comes with a dash of hesitation.

When I started running eight years ago, there was no one to guide me or to tell me that its fine to exercise and be comfortable in your daily wear kurta or saree. I saw everyone had switched to western sports outfits and shoes and I shopped for some running clothes. I started with oversized t-shirts and pants as I was not comfortable with shapely clothes and was afraid how I would be perceived by family and others watching me run.

She adds that sports have taught her many life lessons, and given her the much-needed confidence to slide in any form of clothing.

But unlike Bhumika, a lot of women are apprehensive to wear a tracksuit or shorts for their workout regime. As a trainer, Bhumika shares that such initiatives catalyse a change of mindset in the society and encourage women to not be afraid of how they are perceived when they run.

While training women and underprivileged children for overall fitness throughout the year, the only clothing some of them had was a kurta or saree, so we switched to Indian outfits and chappals ourselves during these training sessions, she adds.

While India is home to the largest number of handloom weavers in the world, their livelihood narrates a different story altogether, says Jonali Saikia Khasnabish, Founder of Heeya. For most weavers, finding a sustainable means of income through traditional weaving is itself a challenge. The handloom industry is not only India’s pride, but also remains a source of employment for hundreds in the country, she adds.

When you see a woman walking on the roads in a saree, you appreciate the handloom that she is flaunting. And for many weavers, instances like these address a larger issue.

At Heeya, traditional crafts and textiles become a means to rural employment generation. The brand stands as a marketplace between weavers from the North East and the urban handloom consumers. Initiatives like these serve many purposes, she adds.

For the longest time, women have been conditioned to believe that they are the weaker sex and they must make sacrifices. Women are still the primary caregivers for children and the elderly. Even eating disorders are more common in women than in men. All of this means that the first thing that women ignore is their physical health and, in turn, their mental well-being.

As a trainer, Bhumika deals with women from all walks of life on a daily basis. When asked about her experience with introducing saree as sportswear, she remarks that she has witnessed mixed reactions.

A saree has the ability to transform from casual to formal and be comfortable and stylish at the same time! It is a liberating outfit. Running in a saree is a tribute to women who take up modern roles and still have the courage to uphold traditions and culture. If the women wear heavy fabrics and loosely tied sarees, then running gets difficult and they won’t enjoy it. That’s why when I conduct saree runs for Pinkathon, we guide and train the women well in advance.

With more women stepping into sarees as sportswear, maybe those six yards too have found new dimension.