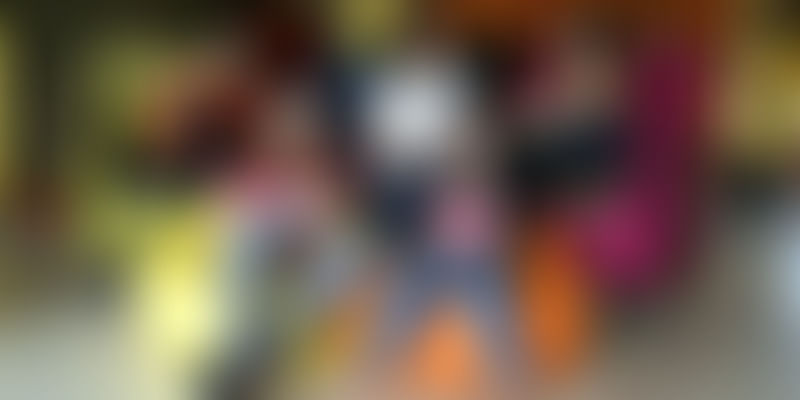 Uterus & I is a hilarious take on all things about being a woman, from PMS, orgasms, queefing to menopause by five female comedians.

It’s not often you get to attend a standup comedy act as a part of work. Not that I was complaining. So one evening, after I wound up at the office, off I went to the Teal Door Café next door to indulge in some rants and raves, and some comic relief.

As a forty-something woman, having had my share of period troubles, and awaiting menopause with dread, the topic of the show Uterus & I did pique my interest. I had ranted so far, now it was time to laugh about it.

I arrived an hour before the show hoping to catch the five comedians in action. The music of the café is drowned in light-hearted banter, profanities fly around, there is full-throated laughter and it looks like the show has already begun.

The atmosphere is charged and the enthusiasm of the girls is infectious. It’s obvious that these twenty-somethings are living life, one punch line at a time. Until Seema Rao Narayan, Founder of Hysterical Hormones and the producer of Uterus & I points out that she is a 38-year-old mother “co-existing with the young ones”.

Seema’s voice is so soft that I have to strain hard to hear what she says. The part-time engineer, homemaker and comedian tells me she had an epiphany in 2016 when she lost her voice following a bad bout of laryngitis. “I couldn’t talk for long periods that year, and ended up watching a lot of American and British comedy shows. Soon, I started writing and performing at open mics,” she says. “The other comedians were at least 15 years younger than me, so they weren’t sure what I was there for. I persisted and attended more open mics, getting better in the process.”

A chance meeting with Sejal Bhatt (another comedian, part of Uterus & I) led Seema to Bras & The Beard, a standup act comprising comedians from Bengaluru. This set the stage for Uterus & I, which she produced through her own production house, Hysterical Hormones. Seema’s act is a hilarious take on marriage, her “one and only” husband, the “aunty syndrome,” PCOD, and other myriad topics that involved the uterus.

“Comedy is a great stress-buster and I love it,” she says.

Shrirupa Sengupta conceptualised Uterus & I in 2017 after she felt that a lot of inside jokes she shared with other comedians needed to come out into the open.

“Uterus & I is a platform where women can joke about their experiences, however sordid they are. The show is not for the faint-hearted, and if you come and watch us and feel offended, it’s on you,” she warns.

Shrirupa is from Kolkata and has a commendable background in theatre. After completing her Master’s in Social Work from Tata Institute of Social Sciences, she worked with the National Aids Control Organisation before, she says, life caught up with her. After moving to Bengaluru, she suffered a nervous breakdown and on the pathway to recovery went back on stage. Open mics and competitions happened and before she knew she was part of the renowned Evam Standup Tamasha repertoire.

Today, she works with an NGO and also is a popular comedian on the circuit. Her act is full of quirky humour and centres on social awkwardness, stalking, PMS, and “everything that’s literally observationally funny”.

One look at Pragya Sharoff and you know the joke’s going to be “vertically-inclined.” This social media marketing expert calls herself an infant at comedy and by size.

Her act, however, stands tall, as she explores why women fake orgasms, why there are so many male gynaecologists, what if men had periods, sexual orientation, studying in all-girls school, and other fun stuff.

“Uterus & I is a great concept because while we have seen men talk about their bodies, the minute a woman talks about hers, people cringe. It’s good people are opening up to it so it’s great to crack jokes, lighten the mood, and be more open to talking about it,” she says.

Sejal Bhat is an “aggressive mood”, and asks me to ignore the fact that she is hyper just before the show. When the joke’s on her, this girl can swear and how! But I understand. It’s all part of the camaraderie of putting up a show called Uterus & I.

This former tax analyst at Goldman & Sachs got into the comedy scene quite by accident. “In 2014-15, I was watching a lot of standup shows and they made a huge impression on me. The more I watched, the more I could predict the jokes coming. I found it a coping mechanism to deal with life’s crises,” she says.

Her first open mic, in her words, “was beyond horrible, bombed and only one person laughed”. She persisted and started getting laughs and now is into comedy for the long haul.

Sejal’s jokes are mostly on herself – self-deprecating humour that revolves around growing up in a Brahmin family, her parents, her first period and other anecdotes.

“I think all of us in this journey tend to keep experimenting. For a while, I was doing some dark material, now I have started to move towards absurdity, I think I don’t have a voice as such as yet.”

Sejal says it’s heartening to see more women in comedy. “Women are now okay doing their own thing and don’t feel they have to be really accepted by the guys. We are getting comfortable being in our own skin,” she adds.

One-and-a-half hours later, I leave with many humorous tales of womanhood. Light-hearted and proud of being a woman who can laugh at herself.

Menopause? Bring it on!