With traditional wisdom and ecofriendly practices, these startups are building sustainable houses 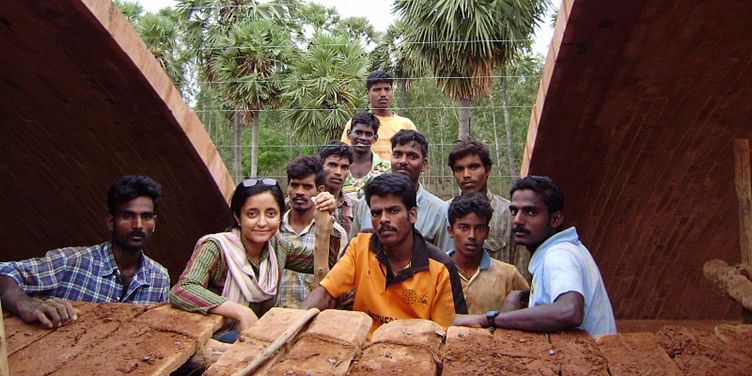 These individuals and startups are on a mission to reduce carbon footprint and are working to safeguard the environment through architecture and construction of ecofriendly buildings.

As India gets ready to brace the summer, the warning signs of heat wave ahead of us is but a rude awakening. Temperatures are higher than expected. The Indian Meteorological Department has forecast a hot spring and a much hotter summer this year, with the average temperatures likely to be above normal by more than 1 degree Celsius.

Adding to the woes is the reducing green cover and the threat of water crises that looms large across cities, especially in Bengaluru. As concrete jungles become the norm in metro cities, few individuals and startups are mindful of the disasters non-sustainable architecture and urban planning lead to.

Below we list few such organisations that are on a mission to reduce our carbon footprint and at the same time are working to safeguard the environment and provide economic and social sustainability.

Didi always had an inclination towards designing and building houses which, as a kid, she did with her parents. Born of a German father and an American mother, Dalia (famously known as Didi) had come to India more than six decades ago.

Today, based in Sidhbari near Dharamsala, the 84-year-old has developed a technique to build sustainable houses with mud and stone, which is inspired a lot from the local tradition.

She has built about fifteen houses, including a beautiful 14-room old people's house, and the technique she uses has a few special characteristics: the houses self-regulate temperature (warm during winters and cool during summers), they are earthquake-proof, and are completely made from materials available locally. Mud houses are not structures built for scale in the plains but are suited for hilly terrain where cement houses are incongruous.

During the past three decades, apart from building homes, Didi has been training young artisans, inculcating ecological values and reviving local skills. She has contributed to the Nishtha community clinic, the Dharmalaya centre for compassionate living, and Sambhaavnaa, an institute for public policy.

A student at heart, she studies traditional aesthetics and vernacular traditions to work out their practical adaptations for contemporary sustainability.

In these times when the environment is in danger, 28-year-old Kumar Shashwat wanted to do his bit and give back to nature. After graduating, he founded Development 2050 in 2016. The organisation was envisaged to provide sustainable environmental development for Delhi NCR and surrounding regions through green construction, rainwater harvesting, revival of micro-ecosystems, and others.

Kumar wants people to come closer to their natural surroundings and to feel responsible for it so that they are motivated to move into action in case of any environmental hazard.

At present, Development 2050 is at work on its construction project in Gurugram, with features such as water reusing technology and terrace gardening. His team is working on reviving water bodies in the Aravallis and building check dams. The target end of this project is to revive the ecological balance of those regions.

He wishes to engage the society in its own green rehabilitation to ensure people’s involvement with the cause.

A professional architect, young Trupti Doshi felt helpless when she realised that unsustainable development continues to thrive in the country in the name of economic growth.

“For one of my projects, I wanted to use Chettinad lime plaster, a technique well known in Tamil Nadu for several hundred years. I had to travel more than 250 km to find an 83-year-old grandfather in a small village who hadn't had a chance to practise his craft for over four decades,” recollects Trupti.

There are several natural materials such as earth, lime, reclaimed wood, etc., which are more cost effective, but require a much higher level of knowledge and skill in their application. And India has such craftsmen all over the country but, unfortunately, there aren’t any jobs for them.

She created Sharanam Rural Development Centre (Phase 1), in rural Tamil Nadu, meant to be the headquarters of a larger village empowerment programme of Sri Aurobindo Society, an international NGO. Drawing from traditional wisdom, her team uses sustainable materials and techniques, minimising dependence on steel and cement.

Sharanam phase-1 has also been recognised by the United Nations Environmental Programme as a model for sustainable development in India.

Puja Arti and Rohan Shenoy founded Build-Inn in August 2015 to help customers find sustainable and alternate materials for building homes. Their aim is to work with builders to create sustainable housing.

Their work recently garnered the attention of the Ministry of Road Transport, Shipping and Highways, which called them to apply for a pan-India design competition for toll booths made with sustainable materials and powered by solar energy. BuildInn’s solar-powered toll plaza won the second prize.

Rohan, Co-founder of BuildInn, says: “This particular highway toll will reduce traffic jams in toll areas and reduce the carbon footprint. Technology companies will be involved in tracking vehicles and all this will be powered by solar energy.”

The startup has gone on to design hospitals, a school, a recreational centre, and mineral water units for the state government, all incorporating sustainability. They use ancient and modern features such as filler-roof slabs, radiant cooling, soil-stabilised block construction, pre-engineered buildings, rain water harvesting, and organic hydroponic gardens.

Siddharth Menon, a graduate from IES College of Architecture in Mumbai, left the plush city life and moved to Auroville. His aim was to use architecture to address socio-economic inequality, ecological and cultural degradation.

He strongly believes that houses should be built in tune with the environment, unlike what is happening today where concrete structures are the norm in most areas.

In Auroville, Siddharth built his first ‘Earth House.’ Earth House typically involves building a structure with the use of natural terrain to help form the walls of the structure. Earth-based houses, which are mostly built with mud, have the least ecological footprint. These structures are built using indigenous building techniques of the region.

Siddharth has primarily been working in the rural areas of Himachal Pradesh, Telangana, Uttar Pradesh, Sundarbans in West Bengal, Odisha, and Karnataka. He has been working with local building materials such as mud, bamboo, stone, wood, working with traditional craftspeople, and uses labour-intensive building techniques.