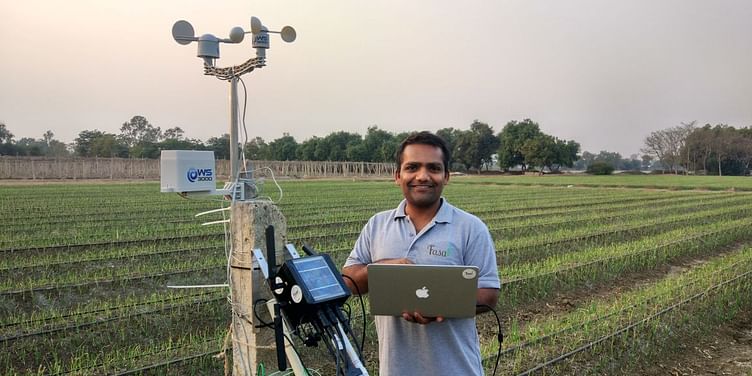 Fasal is an AI-powered IoT platform for precision agriculture. It delivers insights and analytics to farmers to grow more and better.

The problem it solves: An AI-powered IoT platform for precision agriculture. It delivers insights and analytics to grow more and better.

Traditionally, farming has been the result of powerful intuitions and insights gained by the farmer over years. However, with the havoc caused on the land due to environmental degradation and climate change, even die-hard sons-of-soil today need assistance.

Fasal, an Artificial Intelligence (AI) powered IoT platform, removes the guesswork and manual methods of most farmers today who are working in isolation to make critical crop related decisions by providing them with data and analytics to grow better.

Twenty-eight-year-old Ananda Verma, Co-founder of Fasal, says that in his interactions with farmers, he has seen that often there’s poor utilisation of significant resources. The produce is also plagued by multiple diseases, one of the biggest pain points of the farmers. The startup also predicts threat assessment of diseases, thus helping farmers approach the problem through prevention instead of reaction.

IoT and ML to the rescue

Ananda belongs to a farming family from Azamgarh near Varanasi and has seen his father lose his crop because of uncertain weather prediction and lack of information. “And this problem is not only with him but every farmer faces the same issue of lack of data point to make a decision,” he adds.

After graduating from IIIT Bangalore, and working in the IT software industry for more than five years, Ananda realised he could solve this problem of guesswork using tech advancement in IoT and Machine Learning (ML).

This fusion of agriculture and engineering led him to start Fasal with his Co-founder Shailendra Tiwari. “We worked together for a couple of years and he was my product manager and I was his engineering lead,” Ananda says. Shailendra, 27, comes from a product management background, having graduated in Industrial Engg from NIFT.

Grover-Zampa, one of the largest vineyards in India, is Fasal’s customer. Ananda claims that they have saved money in reactive sprays and improved the quality of wine grapes significantly by controlling water stress level with Fasal’s technology.

“One of the influential vegetable farmers in Durg came to know that he has been irrigating excessively in his farm where water is a scarcity. He is now saving 50 percent on irrigation cost,” says Ananda describing how Fasal’s tech is helping on the ground.

Ananda is at present in Hong Kong to leverage Zeroth’s AI expertise into their product. “We have used IoT and AI technologies to build our product. IoT is used to monitor real-time parameters from the farm and AI is used for microclimate weather prediction, disease, and pest prediction,” says Ananda.

While studying at IIITB, Ananda was toying with the idea of building something which can monitor farms. “Though I had built small demos using sensors and all, but it was not a product,” he recalls. Since he had to take care of his family monetarily, he continued working in the IT industry. “But when I saw IoT, ML, and AI was matured and it can be utilised to build what I wanted, I decided to quit my job,” he says, adding that by then he was also financially stable.

“My brother Arpit and his best friend Adarsh run a media startup Fossbytes and they gave us our initial funds to start work. Later, my batchmate Vaibhav also gave us funds to sustain and grow our team,” he says. In just three months, they have expanded to a six-member team.

At the same time, the two founders were actively looking to get pre-seed funding and acceleration support and got an offer from four different accelerators across the world. “We decided to go with Zeroth.ai because they are a well-known AI accelerator in Asia and have already funded a couple of AI startups in India. We raised $120K from Zeroth,” Ananda informs.

Their business model includes a nominal monthly subscription fee. There is no upfront charge or deposit. It is a pay-as-you-go model. “It has worked pretty well for us to penetrate the Indian agriculture market which is very price sensitive,” he adds.

For large scale and institutional farmers, they also offer to sell their IoT device and charge less subscription on software usage.

“We were running six pilots across three states, Karnataka, Madhya Pradesh, and Chattisgarh. We started our paid subscription model in February and have three paying subscriptions today. We have also pre-booked three more for next month, and planning 10-20 more selective customers for the next three months,” he reveals.

With agritech startups catching investors’ eyes, Fasal is looking at an interesting opportunity. BIS Research estimates the global market size for precision agriculture to grow over $6.34 billion by 2022 at an estimated CAGR of 13.09 percent from 2015 to 2022.

Fasal is competing against Indian startups like Yuktix and Exabit Systems, while the competition worldwide includes Cropx, Pycno, The Yield technology Solutions, and more.

“One of our biggest challenges was managing the operations. We are operating in three different states and installing devices on the farm at remote locations. It becomes a big challenge to make the farmers understand the technology,” Ananda says.

To solve this problem, they have distribution partners and have appointed their product engineers to manage operations. “From the technology point of view, we make sure we have less operational overhead,” he adds.