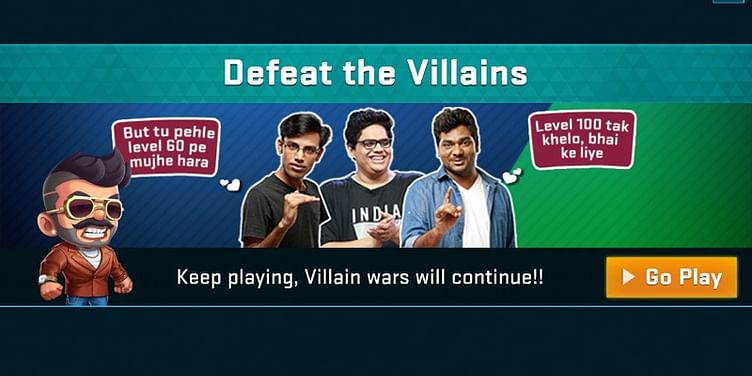 Developed by Bengaluru-based Mech Mocha and Australian developer Halfbrick Studios, Jetpack Joyride India crossed 500,000 installs in just 3.5 days of the launch. We explore how the games work, are monetised and what the long-term goal is, in this App Friday story.

Bengaluru-based Mech Mocha recently announced the launch of an Indian version of Jetpack Joyride, a popular game originally created by Australian developer Halfbrick Studios. Founded in 2001, Halfbrick Studios has been in the gaming industry for many years, and also received recognition like Google’s Editor’s Choice Awards, and Apple’s Design Awards. Apart from Jetpack Joyride, the company’s other hit includes Fruit Ninja.

The new game, Jetpack Joyride India, has replaced the international version of Jetpack Joyride on Indian app stores. In addition to Indianised characters including scientists and vehicles, the game features a different backstory from the original and has implemented level-based gameplay, along with the classic endless running mode re-imagined as ‘Challenges’. Mech Mocha has also introduced popular Indian YouTube influencers like Tanmay Bhat, Biswa Kalyan Rath and Zakir Khan as key villains in the game that spans three different worlds.

Let us explore Mech Mocha and the game in this week’s App Friday.

The company’s first title, Chhota Bheem Himalayan Game, amassed an estimated seven million players in India and was frequently ranked the No 1 game on Google Play. The venture consists of a 50-member team of artists, engineers, designers and product managers who previously worked in companies like EA, Zynga, Disney and DreamWorks. In mid-2016, Aditya Jalan – former AVP, Product at Myntra and Zomato – joined the team to lead product development.

Talking to YourStory, Arpita, CEO, Mech Mocha, noted that the team found synergies with Halfbrick Studios and believed that Jetpack Joyride could benefit from deeper localisation. Hence, by leveraging the Unity game engine they tweaked the gameplay and introduced characters and narrative that they believed Indian audiences would appreciate.

Talking about the current traction, Arpita noted that the game had crossed 500,000 installs in 3.5 days of the launch. She added,

We had over five million game sessions in the first three days of launch. Our campaign with YouTube influencers got us a lot of social interest. The response on the localised dialogues on loading prompts and the characters, including Barrykanth, have been spectacular.

Arpita also believes that the focus on content, and giving YouTube influencers some creative control about its in-game characters has worked out well for the company.

Barry Steakfries, from the Original Jetpack Joyride, is now BarryKanth in the Indian avatar of the game. He is portrayed as a ‘Billionaire-Playboy-Genius’ who's got brilliant intellect and the urge to create a range of jetpacks and gadgets to take out his enemies that appear at different stages.

The game consists of over 100 levels that span across three different worlds, with each world having its own villain. Each of the villains has his own quirks and characteristics that are displayed during the loading screen and in the gameplay and boss fights. For example, Tanmay Bhat’s character, Softee, controls evil soft toys and the load screens include funny trivia about the character.

The gameplay and controls are quite straightforward at the start. One needs to tap the screen to make the character jump and avoid obstacles like lasers and rockets while trying to collect as many coins and gems as possible simultaneously. There are new layers as one progresses in the game. Vehicles like Dr Dragon, Boogie Woogie and Toofani Ryder have been reimagined from the originals with an Indian twist.

While the Machine Gun Jetpack returns, new additions such as the Bar Hopper Jetpack, ISRO Rocket Jetpack, Lassi Power Jetpack and Dhamaka Jetpack are some of the Indian tweaks that Mech Mocha has implemented.

The major difference from the original Jetpack Joyride game, though, is the fact that the Indian version replaces the endless runner aspect with specific goals for each level. The game currently has a 4.5 star rating on the Google Play Store, and mostly positive reviews, but there are mixed reviews from people who have tried out the international version of the game and miss the endless runner mode.

I’ve played Jetpack Joyride, Temple Run and a few other endless runner games before, and can relate to some of the reviews. But in some ways, having specific challenges for each level makes the game more challenging and ensures I don’t spend too much time on each level and can enjoy the plot and villains at different stages.

Jetpack Joyride India is free to download and play. The developer monetises through two main ways-

With an estimated market size of $50 billion, the mobile gaming industry accounts for nearly half of all global gaming revenue. The rapid adoption of smartphones and drop in prices of mobile data have made it easier for mobile gaming to flourish in India. In Q2 2016, India ranked fifth globally by game downloads, jumping two places up the rankings compared with the same quarter in the previous year. It is expected to surpass both Russia and Brazil in the coming years.

But direct monetisation in India is a challenge. Until the mass market becomes more digital-savvy and gets comfortable with spending on virtual goods, developers will likely have to look at other revenue streams, like ads, to monetise.

Some of the early players in the Indian gaming space are Nazara and Indiagames, which were founded in 1999. Others like Moonfrog Labs, Octro and 99Games have been able to cater to the gaming needs of Indian and global audiences.

Like Jetpack Joyride, a few other international games have also been tweaked to Indian tastes. In 2017, Nazara Technologies partnered with Stick Sports to launch Stick Cricket featuring Indian cricketers Virat Kohli and Rohit Sharma. In 2014, Subway Surfer, another popular game, showcased an Indianised version of the game as part of its world tour, and included the streets of Mumbai with locals and cops in khaki as part of the gameplay.

Apart from working with Halfbrick Studios (for Jetpack Joyride), Mech Mocha is also working with other gaming companies from the West and China, by exclusively publishing their hit games in the Indian market. Arpita noted that they have long-term plans for Jetpack Joyride India and expect it to achieve 10 million downloads within the first year of launch.

You can download Jetpack Joyride India here on Android and iOS.