Bootstrapped and profitable from Day 1, this startup creates videos for Trump Towers and Audi 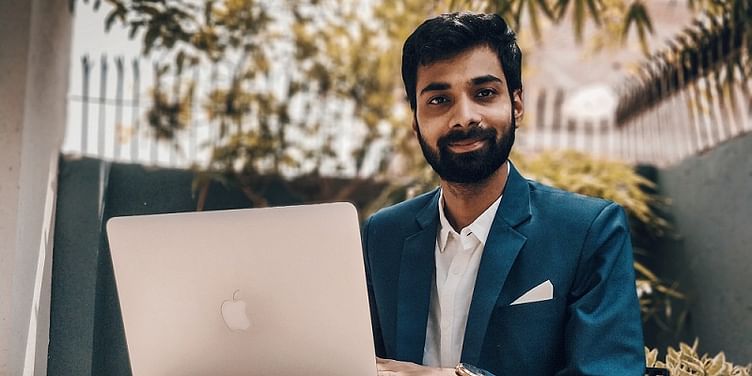 Where it is based: Gurgaon

Problem it solves: Design and branding for small and big brands

It is not every day that a 23-year-old economics graduate leaves his job at Ernst&Young to start up in design. Add to this the fact that he does not spend a penny, and yet makes a small fortune. That is exactly what Piyush Kedia did.

Originally from West Bengal, Piyush finished his under graduation in economics in 2014. Fond of design and marketing, he started up ‘Skribble’ in his second year in college, producing low-cost stationery with great designs. But it shut down in six months due to the high manufacturing costs.

After graduation, Piyush joined EY. Unhappy with a 9-to-5 job, he started freelancing in design. A few contacts from his network had asked him to design their marketing content. Soon, a major publishing house got in touch with Piyush.

“I charged them extra; but they were cool with it. So I was earning more than my salary at EY. I left the job in early 2015 to start up BlueVector,” Piyush recollects. This time, he focused on design, branding, and communication.

Without any advertising, big and small brands were reaching out to him through calls and referrals. “In fact we did not even have a website/brand name for a year. By 2016, we were making Rs 3-4 lakh a month. So we officially launched Blue Vector then,” says Piyush, now 26.

Blue Vector has so far served over 100 clients in automobile, food and beverage, media, real estate, and travel and hospitality. Their services include social media marketing, branding identity design, video and print design among others.

Since there was no capital investment when he started up, all the revenue was divided equally between the company and the designers.

Piyush says, “We’re bootstrapped. Ever since we installed Photoshop 2 years back, we’ve been profitable.”

According to Piyush, Blue Vector avoids the set processes of the industry and creates them from scratch. Their product catalogue ranges from simple social media posts to full-fledged TVCs.

“We are essentially an idea shop that operates all along the creative spectrum and beyond. We approach the market one industry at a time. After creating expertise in one market, we move on to the next that we think could be fun and in need of our basket of products,” Piyush claims.

While designing communication strategy for a brand, Blue Vector keeps in mind the target audience, product, design, presentation, and communication tone. When big names like Audi and Porsche joined their client list in 2017, Blue Vector launched video production to cater to their demands. Soon came the next big brand.

“The marketing manager at Audi connected his counterpart at Trump Towers to us, although such deals usually go to the bigger agencies. We made a brief (video) teaser for them. Without saying what is coming we introduced the luxury real estate titan. The message was that whoever buys it has risen from the ground and gets a God’s eye view of the world. They loved it,” Piyush recollects.

To find the right talent, Blue Vector started off with basic skill sets such as designing, and gradually hired their way upwards. Soon, they gathered people with basic experience and understanding of the industry.

Piyush elaborates, “The core team has been created through long fruitful associations, careful background study, and a lot of luck. Some of the core team members are college friends while some are friends of friends, and some are lucky finds discovered through hiring ads.”

Their team of 40 has people ranging from illustrators to ex-sales executives from Volkswagen, Ernst & Young, Mu Sigma, etc. along with video experts, copywriters, strategists, and managers.

Piyush adds, “We’ve built Blue Vector up as a community of creators and we want to keep it that way. This is why everybody’s got the ESOPs. We’ve even kept a pool of the ESOPs for future employees.”

For Blue Vector, revenues come in through the retainer model and one-time projects. Piyush claims that the latter is often converted into the former, which is their majority chunk of income.

He explains, “We are a service company which provides everything an ad agency does, but with higher affordability and explorability. For instance, we did a short, stylised after-movie for the Luxury Lifestyle Weekend in Mumbai this year, although it may not fall under the conventional advertising/marketing agency spectrum of services.”

Blue Vector is now adding more services to their kitty for a strong market fit – one of them being bite-sized high-quality digital video content.

They plan to raise funding for a new app they are launching for brands to connect with influencers.

“What we are ultimately aiming to do is provide brands completely integrated marketing campaigns driven by new media and new content formats. Design is at the core of Blue Vector. I chose this name because Vector is the most important element of design, and blue is the colour of loyalty, sincerity and faithfulness,” Piyush concludes.