This startup is gatecrashing the sleepwear fashion market’s pajama party 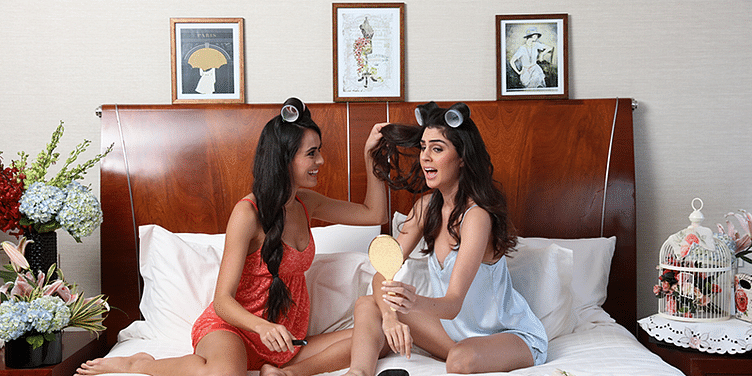 The problem it solves: Fashionable sleepwear and loungewear at an affordable price

While a lot of activity has been shaping the women’s wear fast fashion market in India, fashionable nightwear segment seems to still be in a slumber.

And though the market’s foreplay with the lingerie segment takes the mercury up a few notches, it fails to satisfy the majority of women customers looking for both comfort and style.

Traditionally, women fall back on the neighbourhood stores to pick sleepwear that is mostly defined by shapeless, drab gowns that double up as nighties. Though, worldwide, the sleepwear market size is about $45.6 billion, in India, sleepwear is included in the innerwear segment, which includes brassieres, panties, camisoles, basic T-shirts, shorts/ pajamas, sleepwear, activewear, and maternity wear, and is pegged at $3.25 billion.

According to Tanvi Goenka Sekhsaria, Co-founder of Mystere Paris, a sleepwear and loungewear startup brand, “Sleepwear is said to be the fastest growing in the apparel category, both in India and worldwide.”

Taking advantage of this growing trend, Vishwanshu Agarwal, Founder of Mystere Paris, decided to make an Indian brand of sleepwear. He runs a successful garment export business. The older avatar of Mystere Paris manufactured sleepwear and retailed through distributors pan India to smaller multi-brand outlets as well as larger chain stores like Shoppers Stop and Central.

“It was only in October 2017 that we became a wholly online venture with a focus on brand building,” adds Tanvi.

Since they ventured online, the startup is not looking back. Claiming that on an average they sell 2,000 pieces every month, the startup’s focus on building a sleepwear brand seems to have taken wings.

With their manufacturing facility in Daman, the startup looks at the end-to-end supply chain, from fabric sourcing, designing, production, to sales and marketing. At present, they sell across all leading marketplaces online as well as directly through their website.

Talking about her many challenges, Tanvi says, “I think two challenges are the biggest. The first was in our initial stage where we had to develop a selling model, decide whether we wanted to sell through large departmental stores, smaller multi-brand outlets, own stores, online marketplaces, or our website etc. The initial vision was to be everywhere the customer is. Through several trials, we discovered that not all customers are the same and not all channels had the same requirements. Being everywhere was not financially viable and also meant that we were catering to too many demands. Plus, we did not have a brand identity.” She adds the second challenge was figuring how to reach potential consumers with limited resources.

With a range of sleepwear and loungewear at price points from Rs 499 to Rs 1999, the startup claims it is not competing with fragmented local sellers, a handful of pan-India brands selling nightwear, lingerie brands that sell sleepwear on the side, or casual-wear players that dabble in loungewear.

“Our bigger challenge is, in fact, getting access to our customer base and moulding their thinking. The ones who wear old, uncomfortable clothes as sleepwear, who wear casual wear at home because they haven’t been introduced to comfortable styles that look attractive, who shop abroad because they believe India does not have the variety for them, who believe that good looking, good quality sleepwear in India is too expensive for them,” says Tanvi.

With a core team size of seven, the startup has more plans for the future. “As of now, we think we have enough scope in sleepwear and loungewear to expand. Once we have made our mark and believe we are fully serving our customer, we plan on expanding into different products like lingerie, maternity wear, and leisure wear. We will look at new selling avenues (brick-and-mortar stores) as well as geographical locations (shipping outside India),” she adds.

Mystere Paris is supported by Creative Garments, a well-established name in textiles in India, which is Vishwanshu’s main business. Thirty-year-old Vishwanshu completed his engineering from Purdue. Mystere Paris is his brainchild and he partnered with Tanvi, his cousin, to start and manage the brand. Twenty-nine-year-old Tanvi did her undergrad from Stern School of Business, New York University, and MBA from IIM Bangalore. After graduation, she was working as a management consultant at Booz and Company.

“I have discovered that managing your own business needs something extra. It needs above all courage and confidence. I have learnt many things on this journey, but I believe that my ability to take risks, decisions, and to have the ability to be held accountable for the same is the most important,” adds Tanvi.