The Padwomen of Dantewada are breaking taboos, one pad at a time 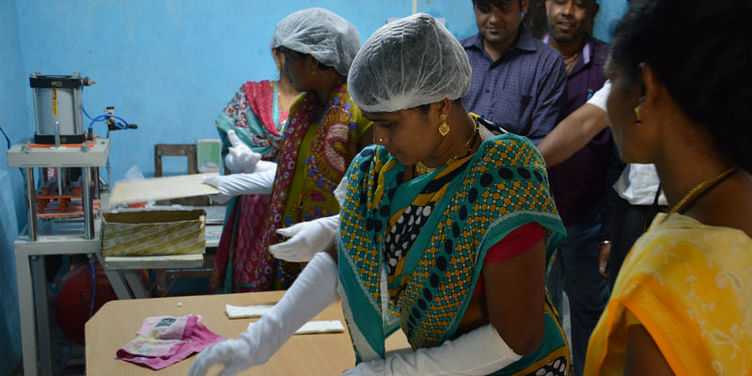 Sahaj, an initiative of Essar Foundation, has empowered the women of a self-help group in Palnar village in Dantewada to open a sanitary napkin manufacturing unit and spread menstrual health awareness.

Palnar village in Kuakonda block in the Dantewada district of Chhattisgarh is classified as a Naxalite area. Despite the backwardness of the region, five women belonging to the tribal community have come forward to make a difference in their own lives and those of others.

According to the Motilal Oswal Research 2016, less than 16 percent women in India use sanitary napkins. Of this, the percentage of women in rural areas using sanitary napkins is abysmally low.

Aditi Gupta, Co-founder of Menstrupedia, says, “According to the latest National Family Health Survey (2015-16) report, the usage of sanitary napkins among Indian women is 48.5 percent in rural areas, 77.5 percent in urban areas, and 57.6 percent overall. There has been an increase in the number of rural women using sanitary napkins, but the number of girls missing school due to menstrual pain has not gone down. Twenty-three percent of girls drop out of school when they start menstruating due lack of affordability of menstrual hygiene products. Dropping out of education drives early child marriage and makes them lose the opportunity to be in the workforce.”

Sahaj, an initiative led by the Essar Foundation, has empowered the women in Palnar by partnering with a local self-help group, Maa Danteshwari, to establish a sanitary napkin production unit that serves the dual purpose of providing an opportunity for livelihood and improving personal hygiene in the area through the availability of affordable and quality sanitary napkins.

Kaustubh Sonalkar, CEO, Essar Foundation, speaks of the idea behind Sahaj: “Our team’s groundwork and interaction revealed that women not only use old rags but also other unhygienic materials such as ash and leaves. Women who use old cloth are often too embarrassed to dry them in the sun, which means they don’t get disinfected.”

“Although there was apprehension initially, they were allayed by the Essar Foundation team after several rounds of counselling and discussions. Consequently, the SHG members agreed to set up of the sanitary napkin production unit in the end of May 2014. The initial six-seven months was the period for women to educate themselves, build confidence, train and gain exposure. Gradually from January 2015 onwards they started production,” he informs.

The main machine is a setup of four different small machines – the de- fibration unit, core forming unit, sealing unit, and UV sanitising unit, which reduce the cost of production and make sanitary napkins affordable to all.

A week-long training programme was imparted to members of the self-help groups, following which production was started. The selling price of the pad is Rs 20 for a packet of 10. More than 90,000 pads have been manufactured and sold so far.

Essar Foundation is working on further scaling up production and set up more such units in the area by involving other SHGs. It has also installed sanitary napkin vending machines and incinerators in schools and hostel toilets for easy access. The sanitary napkin incinerator machine (SNIM) incinerates menstrual waste, converting it into ash and other non-hazardous residues.

Laxmi Devi is a member of Maa Danteshwari, a self-help group that has been in existence in Palnar since 2013.

According to her, the sanitary napkin production unit has changed the way women look at menstrual health in the region.

“In earlier days, women in the villages used to be sent out of homes during menstruation. They would spend those days out in the open and sometimes in the jungles. Now, thankfully, there is a gradual awareness on the use of sanitary pads for better hygiene. But the sanitary napkins available in the market are very expensive and are not affordable for rural women and girls,” she says.

“Essar provided us training that provided us with an understanding of how to weigh raw materials, packaging, quality check, and marketing, after which we were more confident and started managing the unit more professionally. The unit was set up at a location convenient to the women who worked there. The mechanisms are fairly simple to manage and don’t need any specialised skills,” she adds.

The activities were promoted by the Essar Foundation team through regular visits to schools and girls’ hostels. Several meetings were also organised to discuss the issue in anganwadi meetings with women and other local self-help groups.

The women of Maa Danteshwari are now not only aware of the importance of menstrual health but are happy with the financial independence the project has brought them.

“Financial independence is a huge enabler. Wherever the women have found skills they have turned them into livelihood opportunities towards financial independence. Our women have taken a tougher route towards it by having ventured into a taboo idea like sanitary napkin making. However, our uphill stride in this has been an empowering process, as we were able to break into a silently felt need, and converted it into a business opportunity,” Laxmi says.

While the conscious focus has been on Kuakonda and Katekalyan blocks of Palnar in Dantewada, the plan is to take Sahaj to more regions.

“The villages here are surrounded by mountains and forests, making the daily commutes and supplies of essential things more difficult. The only places to buy them are the weekly markets held at a distance from the villages. Our plans are to reach out to such markets where along with groceries, vegetables, and household products, they can easily buy sanitary pads as well. Currently, Sahaj caters to the demands of four girls’ hostels, six schools (in which incinerators and vending machines are installed), a district hospital, one CHC and three PHCs (for maternity pads). We plan to install more advanced appropriate technology for improved quality products. As the unit grows, we shall try reaching out to more schools and hostels, eventually expanding to all local markets. Similar units are in the offing in rural Odisha as well.”