The PanCake Story: This 27-year-old mum of 3 juggled work and motherhood to scale to ten outlets in six months 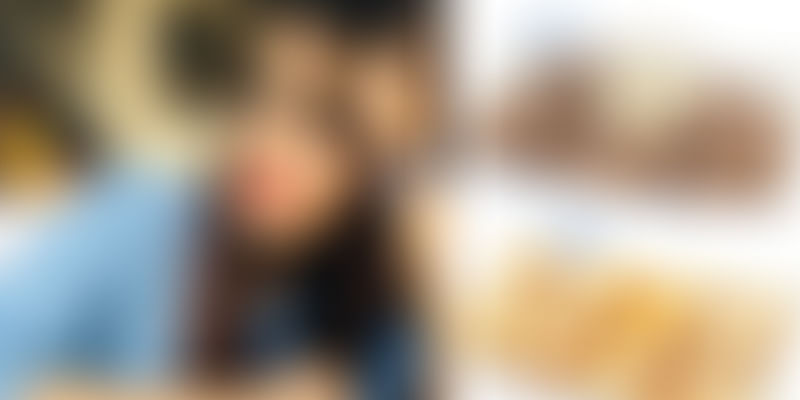 Falak Merchant, a homemaker-turned-patissier, managed to break through c(l)utter with her unique, many-shaped fluffy pancakes, to give Mumbai one of its favourite dessert haunts. This is her #PassiontoPaycheck story.

At The PanCake Story, a name that is becoming more and more popular in Mumbai, the chef’s love and passion for the Holland-born dessert comes in triangles, circles and squares, and is prepared live, much to the delight of the brand new breed of social foodies – the dessert-crawlers. And striking the pancake trend with opulent toppings while it’s piping hot is 27-year-old Falak Merchant, a homemaker-turned-patissier, who has turned her passion into her paycheque – and one outlet into ten, all in six months’ work!

The Bombay-bred mompreneur specialised in management studies, marketing, and procured a Master’s in Human Resources. “My mother was a homemaker but also running a small homegrown business, and she has been a significant influence. In fact, not just my mom – every woman entrepreneur doing exceptionally well in their work - like Pooja Dhingra (owner of macaroon bakery chain Le 15 Patisserie), for example, inspire me,” she says.

Falak started her career working for an HR company, but found the work uninteresting and switched to the beauty sector, managing an international beauty brand thereafter. However, after she got married, she left her job, and went on to have a child. A three-year hiatus followed in her career – and she was focused on being a full-time mom. But, it was during that time that she accidentally dropped her eggs in another basket – oven, rather, leading to some absolutely delicious baked goodies.

You see, she had started baking for her family and friends, and her desserts became all the rage in the circuit. In fact, it was these loved ones who would tell her that she was good enough at it to turn it into a business. “However, initially, I treated this as mere flattery. I did eventually start working as a home baker, but every time I would go out, I observed the demand there was in the market for good desserts. This gave me hope and confidence to start my own venture. It was daunting, as I had no experience in food and hospitality, and this was our first venture,” she recounts.

The launch of the first outlet and the overwhelming response thereafter led to more outlets, 10 in all, across Mumbai, Pune and Surat.

Having travelled to many cities across the world, Falak decided to infuse international ingredients and recipes into her venture. “I truly understood the goodness of dessert and was keen to learn about its formulation. I completely invested myself into the art of designing dessert recipes that would cater to all age groups,” she explains.

The PanCake Story came to be known not only for its delectable pancakes and desserts, but also its quality and presentation. It’s been a fan-favourite amongst the array of pancake shops that have taken Mumbai by storm, lately. “Currently, TPS has the maximum number of desserts on its menu in town,” claims Falak.

They started off with one outlet in Lokhandwala in October 2017, and by the end of December 2017, they had already started two more. Interestingly, and impressively, only two are owned by Falak, and the rest are all franchises. By the end of 2019, Falak has already solidified plans to start 15 more and has served almost 10 lakh people till date.

“The strategy was simple: getting ourselves reviewed by the top media houses and bloggers. We got a good agency on board and, as a result, we got an amazing response across Mumbai,” she says.

On the challenges that she faced along the way, Falak says, “The biggest is executing my dreams; I am a mother of three, so it’s a huge challenge for me to manage personal life and meetings, and invest enough quality time in the development of recipes. It is always said that behind every successful man there is a woman, but in my case, it’s a man behind mine. I had to start waking up at 5 am to do all my household work and by 8 am I had to leave to drop off my kids to school, after which, my work day would start. Post that, in the evening, I would pick my kids up, and work from home for the rest of the day. Weekends were reserved entirely for work. My husband and I would have special dinner dates to discuss the way forward for the business. My husband has been my greatest influencer when it comes to doing business and he has supported me completely.”

Self-funded until now, her message to other women entrepreneurs is this: “We as women are always bound by emotions, and bogged down by the opinions of family, friends and the society we live in. Find an understanding partner and a supportive family, and nothing can stop you from achieving your goals.”