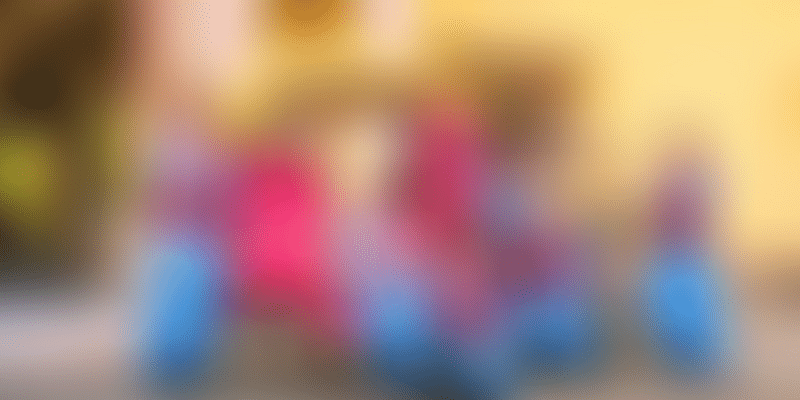 PCRC’s e-rickshaws aim to improve lives of poor urban women. The company trains women living in slums in and around Jaipur to take tourists on customised tours around the old city

It was a blistering hot afternoon in Jaipur’s old city area. A bright pink e-rickshaw rolled to a halt at the signal. A woman dressed in a crisp salwar suit and a vest with a name tag, sat at the helm. Passers-by stared at her, and many looked back more than once to make sure their eyes were not deceiving them.

But the woman sat there, untroubled by their looks, patiently waiting for the traffic signal to lit up. As she sped away, the words Pink City Rickshaw Company (PCRC), painted in white on the side of her striking rickshaw, glinted in the sunlight.

“Before we started, there were no women rickshaw drivers in the city,” says Radhika Kumari, who heads PCRC.

An initiative of the not-for-profit ACCESS Development Services’ (ACCESS Dev) Jaipur chapter, the project is aimed at improving the lives of poor urban women. The company trains women living in slums in and around Jaipur, to take tourists on customised tours around the old city. “We have tie-ups with five-star hotels across the city for clients,” says Kumari. Besides empowering women socially and economically, the company also seeks to be environmentally sustainable with its specially modified e-rickshaws.

What started with a small group of women in 2017, is today a company of 50 women drivers, with some of them owning equity in the company. But getting there was not easy.

“There were very few takers in the beginning,” says Kumari, whose team started attending self-help group (SHG) meetings in December 2016, and reaching out to women in different parts of the city through other NGOs. The women couldn’t understand why they simply didn’t teach them sewing or help them make lacquer bangles instead of asking them to engage in what they thought was a “male’s occupation”.

“There was a lot of hesitation from women and resistance from their communities,” says Kumari. “Their families would ask us why we want to make them rickshaw-walas.” But after much convincing, they finally managed to bring the first batch of women onboard.

Then came the next challenge - training these women. Their families were unwilling to let them be trained by unfamiliar male rickshaw drivers. “When you’re teaching someone to drive, there will be occasional physical contact, and unfortunately, there are no rickshaw training schools for women. Our team learnt how to drive first, and then taught the women to drive,” smiles Radhika.

It was an unnerving experience for the women in the beginning.

“The people who disliked our initiative most were the male e-rickshaw drivers. They felt it to be their domain, and would aggressively try to bully the women out of the project,” adds Kumari.

The women, who were trained, had to contend with catcalls, jeers, and even deliberate collisions by male drivers across the city. Even after 10 months on the road, this is something that has not changed. But what did change is the women themselves.

“We spent a lot of time counselling them to build their confidence. We had to make sure they are self-reliant,” says Kumari. The most surprising part about the first batch of women who joined was that none of them had ever held a job before. “We believed that women who already had a little work experience would be more willing to join the initiative,” she says.

But those that actually dared to come were women who never enjoyed any independence – who had never even gone to the nearby market without an escort.

Today, they figure out directions to hotels and pick up points by themselves. They’re curious about GPS. And they’ve picked up on a few English words, and communicate with foreign tourists without hesitation. While earlier, they were terrified of the hostile male rickshaw drivers, now, they pay no attention to them. “If anyone tries to hit their vehicle or come in the wrong direction, they stop them and call the cops,” says Kumari.

The women have shed their inhibitions when it comes to their clothes as well. The idea of wearing anything other than sarees with their heads covered would have, at one point, been unacceptable to them.

“They wear salwar suits now because it’s more practical. They buy hair buns and make sure that their name tags are straight,” smiles Radhika. “They’re really proud of their jobs and the company.”

The most important outcome of the initiative, however, has been their economic independence.

Women who otherwise had no control over family finances or financial decisions of the family, are finally earning money that they see as their own.

“My budget is bigger and I can spend on my children,” says Sunita, who has been working with PCRC for six months. “I love driving the rickshaw and talking to foreign tourists. It’s something I never imagined I would do,” she says.

Kumari credits the success of the company to the sheer will-power of women. She recalls the story of Shehnaz, who wanted to join the company last year. A 40-year-old grandmother, she had a simple reason for her decision – to do something for herself for a change. “She told me that both her husband and son were e-rickshaw drivers, but they refused to let her drive when she asked,” says Kumari.

When Shehnaz heard that someone was teaching women how to drive, she decided to sign up to prove to her family that she can do it by herself, and be better at it than them.

Just as the bicycle liberated American and European women in the 1890s, the PCRC’s e-rickshaws are becoming machines of freedom for these economically and socially disadvantaged women in Jaipur. After a promising start in the company’s first tourist season, its team has big plans for the future.

“The plan has always been to become a company of 200 women drivers who run it by themselves,” says Kumari. She hopes it will evolve from a social development programme, to a social enterprise that is here to stay.

“We want it to become a company that every tourist, who comes to Jaipur, wants to tour with the rickshaw company,” she concludes.