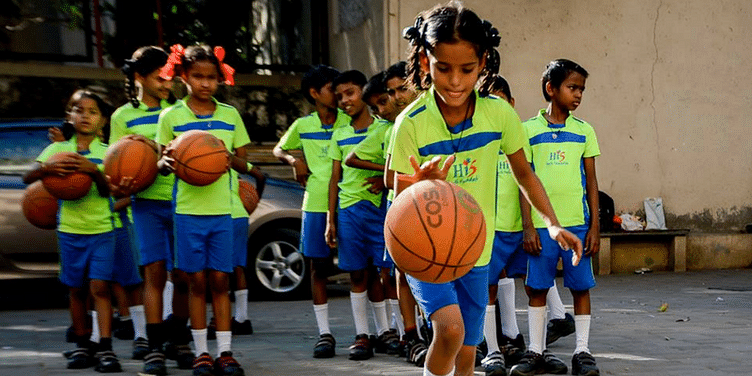 Spreading ‘hopes thru hoops,’ the non-profit is empowering underprivileged children to not only excel in basketball, but also become champions in life.

Cricket has always been a crowd-puller and India's favourite sport, and football and hockey have had their share of fan-following. In fact, Kabaddi and Badminton too have found space in the professional league through a franchise-based model. Basketball, however, has found little space in the national narrative. Unlike the global fanfare around the National Basketball Association (NBA) in the US, India is still striving to mark its base in the sport.

“We want basketball to become a clear number two sport after cricket in India. Our primary goal is to raise the basketball talent level in India,” says Yannick Colaco, the managing director of NBA India, in an interview.

Founded in 2015, the non-profit Hi5 Youth Foundation aims to increase the visibility of the sport and revolutionise the “state of basketball” in India from the grassroots level. It plans to do this through a multi-level, four-year programme, that gives underprivileged children across Mumbai access to basketball coaching.

“If you consider cricket in India, its popularity is not an accident. There are coaches and people willing to put money at each level - from gully cricket team to a national team. There is a huge flow and pipeline of talent that’s coming out of schools and under-19 teams to reach the national-level team. That’s what we envision to build for basketball in India,” says Usha, director at Hi5.

Radhakrishnan and Usha always wanted to move beyond their corporate life, dedicate more time to social work, and contribute to the upliftment of the underprivileged children, without replicating the work done by established NGOs. Radhakrishnan, an ardent fan of basketball, believes that sports is a great medium to nurture young talent, inculcate values, and encourage them to strive for excellence.

Recognising the lack of infrastructure, direction, and opportunity to play and excel in sports in rural India and government-run schools, he started Hi5 Youth Foundation with an aim to take basketball to the underprivileged children.

“I made cold calls to many private schools and institutions explaining that we want to train underprivileged children in their basketball courts. The efforts turned unsuccessful at first, but Mr Leo of YMCA Ghatkopar asked us to meet him right away. He wanted us to run the free programme during their non-peak hours,” Usha recalls.

The husband-wife duo started the organisation in April 2015 with 120 children.

The success with YMCA Ghatkopar laid the foundation for the future training session in schools across Mumbai, including St. Arnold School in Andheri, and Bombay Municipal Corporation Physical Education.

“We identify young and promising talent across these schools by our own standard parameters. Based on this, we recruit nine to ten year-olds who have never held a basketball before, and then nurture them to enhance their performance,” says Usha.

Their flagship programme ‘Hope Thru Hoops’ runs for four years and across four levels - Beginner, Intermediate, Advanced, Elite. Each centre has a dedicated full-time coach, who trains these students right from the Beginner’s level. These coaches follow an in-house curriculum that is co-developed by them in collaboration with the Hi5 Youth Foundation.

The Foundation conducts regular and periodic tests and tournaments to measure the performance of students, coaches and the centre in order to sustain, scale and become successful.

“Our objective is to run a programme that is effective in learning how to play basketball without forgetting to have fun while doing so,” Usha adds.

Radhakrishnan says Hi5 aims to not only train young minds in professional basketball, but also imbibe life skills in the process.

“At Hi5, we believe sports is not the medium but the platform for these children to develop improved life-skills, to better their performance, and build strong aspirations to do well in their future,” says Usha.

Through basketball, the Hi5 team helps children to develop in the following areas -

A sports-based programme will help in decreasing anti-social behaviour among children, while encouraging a goal-oriented lifestyle leading to the development of motor skills, and better mental growth. It also leads to increased participation in school, as well as performance in the classroom.

“As for basketball, specifically, we believe that it is the perfect sport for India - it’s low cost, takes less space, and is high in energy, where ten people can play with one ball and basket. It is a team sport that encourages the idea of working together towards a common goal that raises everybody’s morale,” she says.

The organisation was bootstrapped by the couple for the first two years. In September 2017, the non-profit received funding from Book a Smile, a Book My Show initiative, supporting 500 children. Presently, the couple hopes to raise further funds from corporates and also increase their base beyond Maharashtra.

“We want to start at the grassroots level to increase the funnel of basketball players. What we’re building is sustainable, scalable and has volume. And this is what we need to change the face of basketball in India - we need more people playing basketball,” Usha concludes.