With e-learning kits and global classrooms, this Pune-based entrepreneur is connecting one lakh rural students 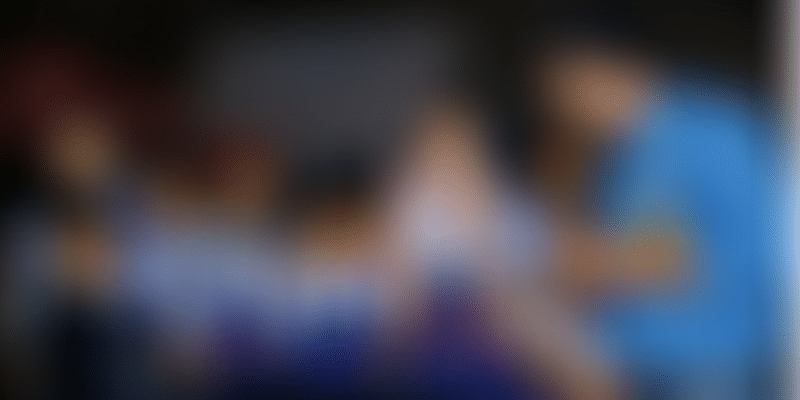 Pune-based edtech startup eLMNOP is connecting rural children with subject experts from across the world, with new teaching methods that combines technology, internet and volunteers from companies

A decade ago, on June 19th, at the 58th convocation address at the Aligarh Muslim University (AMU), a man held the center stage. In his invigorating speech, former President of India, Dr APJ Abdul Kalam, presented “Vision 2020” for India. A dream that foresaw the diminishing gap between the rich and the poor, and it placed the year 2020 as the deadline to achieve this goal. Among the many people who envisioned APJ’s dream was Santosh Talaghatti.

While Kalam addressed many issues at the event, education was one of the key takeaways. Santosh, all of 26 then, got inspired by APJ’s vision, and decided to contribute to the sector.

He saw an opportunity when the Maharashtra education department invited him to consult. It was the coming-together of two powerful arms, he says. Today, ten years later, Santosh is on his way to connect one lakh rural schools through global classrooms, through his edtech startup eLMNOP.

An MBA graduate from the University of Pune, he started working with government schools to understand how they function, and tried to find ways to build a bridge between urban and rural students. Today, with CSR funding from companies such as Honeywell, Emcure, Infosys, Cognizant, Amrita University, and Teachsurfing, the three-old startup is all set to raise Series A funding.

In conversation with YourStory, Santosh Talaghatti, founder, eLMNOP, elaborates on how his startup is contributing to the ‘Digital India School’ mission.

It all began here

“After quitting my job, instead of serving one school, I felt it is better to serve thousands of schools using advanced technology. I also felt that rural students should not be deprived of the facilities that is available to urban students. I realised rural students and teachers are sometimes even smarter than urban students, but they need a platform to express their abilities and potential, and with the right guidance, motivation, and support, this is possible,” says Santosh.

This led him to start eLMNOP, a one-stop platform to enhance the quality of learning and teaching process. The edtech startup uses value-based e-learning, hands-on research, and project experience by connecting subject matter experts from across the world. Santosh set his pilot project in the Maan village of Mulshi Taluk in Maharashtra. In order to achieve this, he set up smart classrooms in this village with the help of government officials. As the local schools lacked basic infrastructure, he set up the classroom at the gram panchayat office. The project became a huge success, and attracted attention from neighboring villages, and this when the Maharashtra governor recognised the village to be a ‘Digital Village’.

The success led Santosh to expand his project to 10 more schools at the zilla panchayat level. Today, over 100 schools are interconnected in the districts of Mulshi, Hinjewadi, Maan, Sutarwadi, and Sus to name a few.

Most of the schools under the project were handpicked depending on their interest to adapt something like digital teaching. Basic infrastructure facilities such as electricity, computers, internet connection and seating space was explored later. When this was sorted, the digital classroom opened up for students, and the experts were connected through Skype sessions.

“The experts include scientists, educationists, IAS officers and other professionals. So far, nearly 1,000 schools have been a part of the project through online conferences, empowering 10,000 teachers,” he says.

During the interaction, students are taught étiquettes, how to greet people, communication skills, and how to approach strangers. Classes are conducted by experts for rural children, where a student’s question sometimes has inspired these experts to contribute more in their respective fields, he adds.

During most of the classes, if the expert is conversing in English, there is a translator to make things easier. In the entire process of bridging the gap, the startup has also trained more than 6,000 teachers in Maharashtra through ICT teacher training, which is aimed at introducing systematic and logical ways in building confidence among teachers.

Some of the features of the programme are - to set up a computer in each rural school, consulting and implementation of Global Classrooms, teacher empowerment programmes, cultural exchange programmes, arranging global expert sessions, setting up of smart classrooms, engaging interns for overall quality improvement, and inspirational lectures for value-based education.

The team at eLMNOP is looking to expand the programme to Karnataka, Kerala, Madhya Pradesh, Andhra Pradesh, and West Bengal.

The startup, which started with an initial investment by Santosh, later raised CSR funding from few corporates. As of now, the founders are in talks to raise their first round of funding, which they say will soon be announced. The platform will also be launched as an app. English, Mathematics, Financial Modeling, Content Writing and Social Interface are some of the topics that will be discussed on the platform.

Santosh says he has experienced mixed reactions while raising funds for his social enterprise, which is a tricky space to be in. “We had both fruitful and bitter experience when we approached companies for their support. Many of them are not very keen to invest in the education space as part of their CSR. We have wasted our time in multiple meetings, presentations, in visiting schools, and finally did not turn up with funds,” he adds.

But despite the tedious journey, the startup has found a home in Germany and Armenia. An education sharing platform called TeachSurfing has collaborated with eLMNOP. Santosh has found two mentors in Germany, with Any Mary as their strategic advisor, and Gabriela is consulting to develop business plans and financial models to raise funds.

“Being with children and inspiring them is the most important goal that an individual should ever dream to accomplish. Santosh has a meaningful vision - standing for the right to education on behalf of underprivileged children – which is one of the most exquisite platform offering one to one direct experience, building knowledge-sharing bridges to India coming from all over the world,” says Any Mary.

India, with a population of 1.35 billion, the year 2016 noted the share of 18-year-olds in schools and colleges going up to 70 percent. With the government rooting in for ‘Digital India Project’ at the Center, and the state government’s taking the mantle, initiatives like eLMNOP distributes this responsibility to people across all expertise, and is surely leaving behind a legacy to narrate.