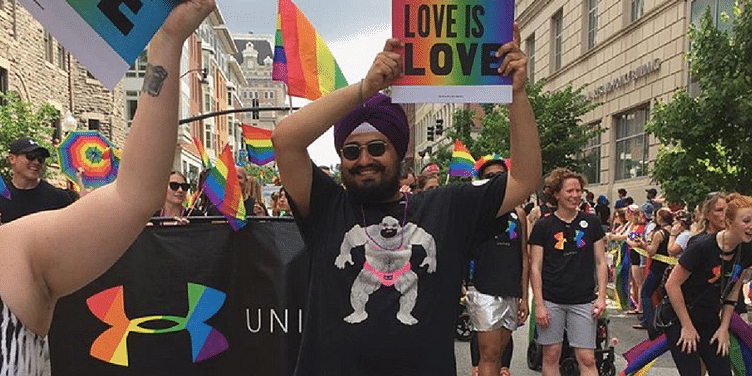 A recipient of silver MoCCA Award of Axcellence 2017 from the Society of Illustrators in New York, his Instagram channel propagates 'breaking away' from stereotypes with doodles that show women sitting or standing the way they like, rather than succumbing to the societal notions of 'feminity'. Jasjyot's art is a mix of modern contemporary art yet holds the authenticity of the time bygone.

In his autobiographical comic, To Babes, With Love, he speaks of a young boy's encounter with the notions of masculinity, sexuality and his bond with his father, says The Quint. Speaking about his childhood in India, he says,

Growing up in Delhi was wonderful. My mother is from Lucknow, so we visited the city quite often as well. There is such a surprising blend of the old and new in both the places. I think that really grounded my work. I remember my mum coming to pick me up after school art competitions, and travelling in DTC buses.

He says that during his childhood, he drew inspiration from NGMA, India Gate. "I would stare at the huge nude paintings of Amrita Sher-Gil and the smooth graphics work of Jamini Roy, even trying to copy it in my little sketchbook squatting in the middle of an exhibit," he adds.

He moved to Ahmedabad to study Animation Film Design from NID Ahmedabad, says Kulture Shop. For someone who always felt for the cause of homosexuals, moving out to India to the Maryland Institute College of Art, breathed fresh air into his art that allowed him to speak about the issues, taboos and the mere existence of the queer community. Maryland took him by surprise when he saw local gay bars and a community that was welcoming to outsiders like him. This is where he regained the confidence for his art and the multitudes of effect it would have on people.

Taking inspiration from his own life and how he was bullied for being a plus-sized man, he started speaking of body positivity. With hashtags that read #BigIsBeautiful, #BadaBehtarHai

"For far too long women have been told how to act and behave, and are allowed lesser and lesser agency over their own bodies and navigating their emotions. It happened with most of our grandmothers, mothers and sisters. And I’ve seen it happen, and I think it is unfair. Everyone has the right to express any emotion they feel. The women I draw are my way of reminding people of that, and to realise that they are still beautiful," he adds.

Do you have an interesting story to share? Please write to us at [email protected]. To stay updated with more positive news, please connect with us on Facebook and Twitter