A school dropout, this construction worker represented India at the World Skill Competition 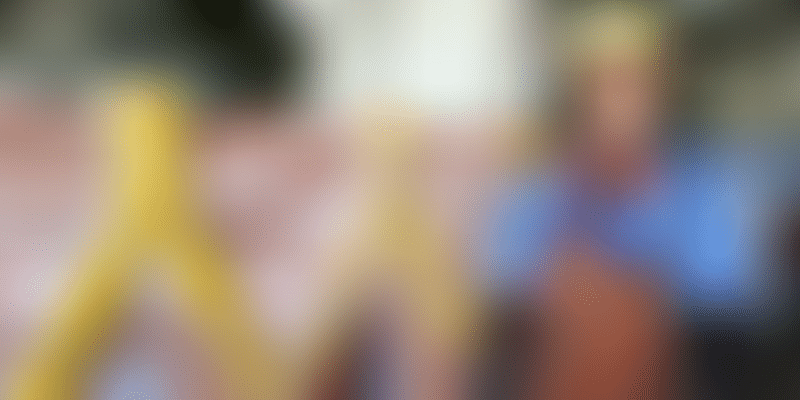 Rohim Momin, who competed against people from 59 countries and constructed a world-class standard building, is putting the spotlight on dignity of labour.

One of the main reason India is a booming economy is the fact that it offers cheap labour. Ever wondered what constitutes such a labour force? In more than half the cases, it is people (men, women and even children) who uproot their residences, move great distances, and relocate to new cities under vulnerable conditions.

Rohim Momin’s story, too, follows a similar pattern. A school dropout, an orphan, and the sole breadwinner of his family , he migrated to Delhi from his village in Malda (West Bengal), and joined the construction labour force.

“I really wanted to become a teacher as a child. I was one of the toppers at school, and loved studies. But due to my responsibilities, I had to join the construction sector,” Rohim recalls.

His grit and determination to earn a better livelihood and secure his three younger sisters' future drove him to go beyond manual labour work. He sought to get skill training and refine his bricklaying capabilities, and to represent India at the World Skills Competition in Abu Dhabi in 2017.

Born and brought up in Malda, Rohim had to drop out after Class 11 when his parents passed away in a road accident. In 2014, he became the sole breadwinner for his family of three sisters. He joined the construction sector as a labourer.

“Our village had a contractor who took people to Delhi as labourers. I got introduced to him and came to Delhi with him. About 80 percent people from my village work outside in the construction sector,” says the 22-year-old.

In the beginning, he just followed his supervisor’s instructions on the formula for the cement mixes, and focused on sheer physical work. Slowly, he realised that the mason earned more and the lure of money drove him to understand and take up this role within his first year of joining.

One day, he heard few labourers at the construction site discussing a competition on masonry, where a person who completes given tasks in given time wins prize money. Intrigued, Rohim participated in the competition, and was placed second among the 18 participants across the Delhi-NCR region.

“At the company level, I has to make an H-shaped one-metre long wall in four hours. The competition takes all your physical strength and focus. I wanted to sip water during the competition, but to save time, I avoided it. Time and accuracy are the keys to success,” he shares.

Post the internal skills competition, he competed at the national level, and bagged the second place at the National Skills Competition (2015). He was later selected to compete at the World Skills Competition, for which he prepared for 14 months at CREDAI’s Kushal initiative in Pune from September 2016 to October, 2017.

The bricklaying component of a house or building is usually the most visual aspect that people will see. The main responsibility of a bricklayer is to construct accurately and neatly according to the plans, which often contain technical details.

“No two projects are ever the same, and so the bricklayer has to be able to adopt their thinking and often find solutions to problems efficiently and effectively,” explains the organising team at World Skills Competition, Abu Dhabi.

Rohim had to compete against people from 59 countries, where he had to interpret drawings, set out and measure, and construct a building with a world-class standard.

“In Abu Dhabi, everything was different - the motor, sand, and techniques used. For that competition, it took 14 months of intense training at Kushal Pune,” Rohim recalls.

The competition tested his planning and scheduling skills, and his construction was evaluated on the basis of precision, accuracy, tidiness, and attention to detail. At Abu Dhabi, Rohim built a test project using bricks and blocks of different materials - sand, lime and cement - where his construction included a ‘falcon design' decorative brickwork.

Rohim won a ‘Medallion of Excellence,’ and won the fifth position.

“I was very disappointed at the results. I cried all day as I had worked really hard for it. However, what I’ve received is also good; I have a good job.”

As opposed to developed countries, where the percentage of skilled workforce is between 60 percent and 90 percent of the total workforce, India records an abysmal 4.69 percent of workforce with formal vocational skills.

“The construction sector is the second highest contributor to the GDP, and has a meagre four percent skilled labour. The industry has inadequate mechanisation, and therefore workmanship plays a crucial role in the quality of construction. Skill development and training not only helps in building long-lasting, high quality, and low-maintenance buildings, but it also greatly enhances the workers’ personal lives,” says Vishal Gupta, Chairman of Skill Development in CREDAI.

The seemingly common work of bricklaying, which we witness at construction sites, is often overlooked.

“Public perception that views skilling as the last option meant for those who have not been able to progress/opted out of the formal academic system, is a challenge in the skilling and entrepreneurship landscape in the country,” states the Annual Report, 2016-17, of Ministry of Skill Development and Entrepreneurship.

Whether it is the brickwork of a pathway, a wall, or a house that catches your eye, expert work and skills are involved in the construction. The buildings stands testimonial to a bricklayer’s skills in organisation, communication, creativity and design, problem solving, and accuracy.

“There are vocational courses in colleges abroad for construction work, and they consider it an actual profession. However, in India, people perceive it as a job for people in dire need and poverty. There’s a lot of difference in the way the work is perceived in India and abroad,” Rohim says.

Post the competition, Rohim has now gained recognition and respect among his peers and in his village. More importantly, he has secured a job as the Assistant Foreman at ATS Constructions, and is a trainer for other budding participants at National and International Skills Competitions.

“No work is lesser or greater, what matters is the way you do it. Everyone should simply work with their heart and soul; the results will follow,” he concludes.

Through his work and training, Rohim hopes to spread the message that labourious work requires skills too and can help propel the country’s economy forward.