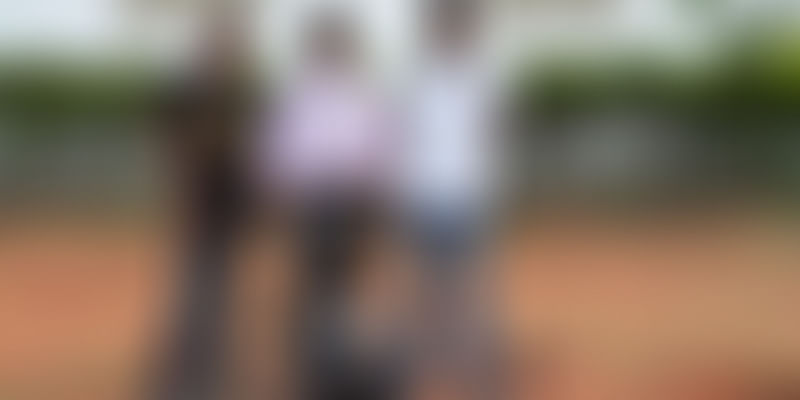 Where it is based: Hyderabad

Thanos, from the Marvel comic universe, will bring us images of the latest Avengers movie Infinity War. But for the farmers in Telangana and Andhra Pradesh, Thanos is a drone technology company that effectively sprays pesticides and makes their lives safer.

Pradeep Palelli, Founder and CEO of Thanos, felt drones could be used for more meaningful purposes and started the company in 2016. The startup initially started providing aerial surveying solutions using off-the-shelf drones that they were able to procure from different vendors.

Prior to founding Thanos, Pradeep was the co-founder and CTO at the roof-top solar company - Zolt Energy.

Focusing on farms and farmers

“Earlier, the value proposition was to increase efficiency of on-ground monitoring. It takes a fraction of the time to collect data using a drone, compared to manual on-ground collection,” says Pradeep.

While doing demonstrations at different startup events in Hyderabad, a few farmers and IT employees, who had agricultural farms back home, asked Pradeep if drones could help in farming.

Hence, Pradeep decided to conduct a few surveys and interview farmers, and he realised the problems, particularly in the pesticide spraying activity. The availability of manual labour was fast dwindling, as the process was inefficient and had several health hazards. Pradeep felt this agricultural activity was ripe for automation.

The team spent the next three-to-four months designing, building and testing a prototype of an ‘Autonomous Aerial Pesticide Spraying Platform’.

“It was during our technology demonstrations, and during one of the agri expos, where we displayed our drone. The interest shown by farmers validated some of our assumptions as well. Based on their feedback, we went ahead and created a field ready/market ready Aerial Spraying Platform with a capacity of 15 litres,” says Pradeep.

Roping in a co-founder

When Pradeep started building drones, he realised he couldn’t do it alone, and he needed a co-founder. Around the same time, Prathyush Akepati was tinkering with drones of various sizes and configurations for different purposes. Pradeep realised the quality of drones Prathyush was building was different from all others available in the market.

“I got in touch with him over a WhatsApp group for RC/Drone hobbyists, and we met,” says Pradeep.

The duo discussed, and by the end of last year, Prathyush came on-board as the Co-Founder and CTO, and handled everything related to building, designing and testing drones. Prior to joining in as co-founder, Prathyush was the Chief Executive Manager at Pacific Hospitals.

“Our first and only employee is Harish Alladi, who holds an MTech in Aerospace Engineering and has been working with Prathyush for a while now. Harish comes up with ingenious solutions to problems with drones and drone-related functionalities,” says Pradeep.

The aerial spraying platform covers an acre of land in a uniform and efficient manner in just 15 to 20 minutes. This helps reduce input costs for the farmers, and also possibly improving the yield and soil health.

A mobile app is used to mark the boundaries of the land that needs to be sprayed. Once marked, a couple of settings like the height and speed of the drone are entered. After this, all basic checks are performed and the drone lifts-off.

No manual intervention is necessary during the spraying activity, and the drone comes back to the starting point by itself, or can be brought back manually if needed. Typically, the conventional method of spraying requires nearly 100-150 litres of pesticide (High-Volume Spraying) to be sprayed per acre.

“We are currently using 30 to 40 litres (medium volume spraying), and we intend to bring it down to 10 to 15 litres per acre (low volume spraying). The lesser the volume, the more the work rate (acres per hour),” says Pradeep.

Thanos is primarily working on agritech, agri-automation, and agri-intelligence sectors, in terms of crop health monitoring and plant count. In the defence sector, the team claims to be doing a little work for the R&D wing of the Indian Army. They have also customised an off-the-shelf drone for payload delivery application and mining operations.

Apart from being incubated in CIE IIITH and ICRISAT, Thanos is also supported and mentored by RICH (Research and Innovation Circle of Hyderabad - A Telangana Govt. Initiative), and also by Surge Impact Foundation and Berkeley Smart AP.

“While quite a few companies seem to have either imported drones or built crude versions that are not market ready, we have made it a point to design, build and test in-house a market-ready product,” says Pradeep.

This is done to keep the capex low and the revenue model more financially viable. However, most of the components required to build Unmanned Aerial System (UAS) platforms are not manufactured or even sold in India, and they have to be imported from China.

Some of the materials we have imported include 3K carbon fibre sheets, DC motors, propellers and other minor electronic components.

One of the critical components of the drone is the Flight Controller (the brain of the system), which is also being procured from China and other countries.

Pradeep says they are currently working on building their own version of this using an open-source hardware, so as to add more capabilities to make the drones smarter and safer.

The company is now working on high-endurance drone prototype (one hour or more flight time) that can be useful in surveillance applications for different types of users (Police, Army, Municipalities). They are also looking closely at drone delivery and AI-based solutions.

The team has a spraying-as-a service model, where they intend to charge Rs 500 to Rs 600 per acre. With the current costs of building a 15 litre agricultural spraying drone, Pradeep believes this can be recovered in a year (CAPEX and OPEX).

The global market for agricultural drones is believed to touch $4.2 billion by 2022, growing at a compounded annual growth rate (CAGR) of 30.19 percent.

In 2017, about $53 million was invested in agritech startups over 17 deals in India.

Apart from this the Andhra Pradesh and Telangana government is working with few agritech startups and drone companies to work around various agriculture related problems. The Bill and Melinda Gates Foundation too is working closely with the government for the same.

The founders had initially pooled in their resources of Rs 18 lakh when they started. Pradeep says they are experimenting with different kinds of revenue streams, and claims to have made revenues of Rs 2.25 lakh so far.

“There are plenty of drone companies out there in India, but we want to be a class apart by building designed-in-India, market-ready and intelligent drones for local applications as well as for export purposes. We aspire to be the biggest manufacturer/service provider in the Indian drone market (micro and mini segments) in five to seven years,” says Pradeep.