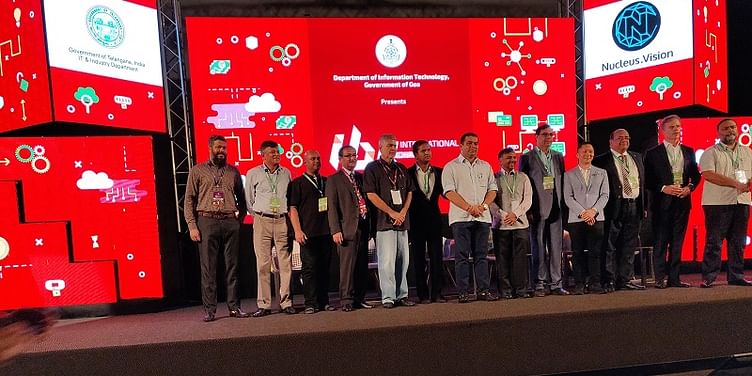 At the International Blockchain Congress held in Goa, experts on the technology as well as stakeholders from the government, police and academia discussed the importance of adopting blockchain.

Blockchain, as the world knows, is a nascent technology. It is to us now what the internet was for the early nineties. But while the internet decentralised information, blockchain decentralises transactions of various stakeholders interacting with each other. Thousands of blockchain aficionados, experts and stakeholders gathered at the International Blockchain Congress in Goa on Sunday to proliferate the benefits of the technology.

Rohan Khaunte, Goa’s Minister for Revenue, IT, Labour and Employment, said governments have to embrace blockchain to ensure “certainty” and “transparency” if they have to create trust with citizens. He pointed out that people trust currency because it carries certainty that is ensured by the RBI.

Blockchain is a decentralised ledger that records every transaction of stakeholders and ensures that records are not tampered with. It also ensures that transactions happen faster than the current regulated system. For example, transferring money or paying your credit from the issuing bank to the acquiring bank can happen on a real-time basis instead of the current three days. Why blockchain? “Blockchain ensures information flow is consistent to all parties and can be applied from finance to media to business transactions,” explained Frans Kempen, the blockchain lead at IBM.

So how can it be applied in India? Khaunte said,

“Blockchain must be implemented in land records as there is no certainty about tracking multiple landowners - of the same land - and the legal cases that follow. The buyer must know this and blockchain should allow the public to access these records.”

He added that that would be the beginning of good governance and that the government should be open to adopting new technologies to gain the trust of citizens.

“We are a small state and have proud roots. We have robust infrastructure and can help startups. People say Goa has missed the IT bus, but we are not going to miss the startups and new technology bus. Our commitment is to innovation and improvisation with a partnership with industry, academia and corporate,” he said.

“Trust and transparency is key and blockchain will create a frictionless system thanks to the open source nature of the Hyperledger, which is the foundation of blockchain, and is better than distributed databases, which still function in a regulated manner,” he said.

Why is it misunderstood?

However, blockchain is not understood by many. According to Gartner only one percent of the world’s CIOs want to adopt the technology. Most of them link blockchain to cryptocurrency, which, in essence, is where it all began. But cryptos use blockchain because it is the underlying Hyperledger technology that ensures it is decentralised.

“Creating a regulatory framework and licensing framework is what is key to a corporate to work with banks and governments on blockchain. Malta is the birthplace of the crypto economy and it's only a matter of time before companies understand why the world of crypto is transparent,” explained Jeremy Gardner, founder of Ausum Ventures. But he noted that mass adoption of cryptocurrencies will not take place until the central bank allows this to happen. “There has to be a comprehensive regulatory framework,” he added.

Professor Varun Sahni, Vice Chancellor, Goa University, on the other hand, wanted to know how blockchain can help academia. “To what extent will it impact society? Will it help with the 5Cs that impact the society,” he asked.

The 5Cs, according to him, are:

Content: There is so much content out there that it seems like students no longer need a teacher. Prof Sahni wanted to know how blockchain can help a teacher ensure that the information a student is assimilating is legitimate.

Certification: Today, there eight million graduates in India who are given certificates and paper qualifications. Blockchain can create a leader of all qualifications in the country and ensure easy access to citizens and different stakeholders.

Collaboration: Blockchain should ensure that all stakeholders are ready to work with each other and agree on the aspects of a transaction.

Contribution: We don't see collaboration because people don't want to share data to contribute to a larger agreed goal. “How do we ensure productivity with collaboration,” asked Prof Sahni.

Commerce: What is the nature of the commerce is another question that industries need to ask.

It is worthy to note that even the police in India are looking at blockchain.

Muktesh Chander, Special Commissioner of Police, Goa said, “The police should be able to track repeat offenders across states. For example, drivers who have repeat drunk driving offences should pay higher insurance and must certainly be prosecuted in different states when caught. We need blockchain to help us track and trace and collate information and use it in prosecution so that all stakeholders--lawyers, judges, defendants and plaintiffs--are on a single platform.”

Blockchain has, in fact, become the gold rush when it comes to the realm of cryptocurrency. But in terms of smart contracts it can take flight, provided the regulator Reserve Bank of India allows blockchain users to link their tokens to a crypto exchange. Otherwise, smart contracts will face stiff competition from distributed databases, which are currently winning against blockchain.

Niti Aayog, in collaboration with Nucleus Vision and the State governments of Goa and Telengana, is hosting India’s first-ever International Blockchain Congress in Hyderabad and Goa with the aim of bringing together renowned speakers and thought leaders to deliberate on how we can make India the next blockchain capital of the world.