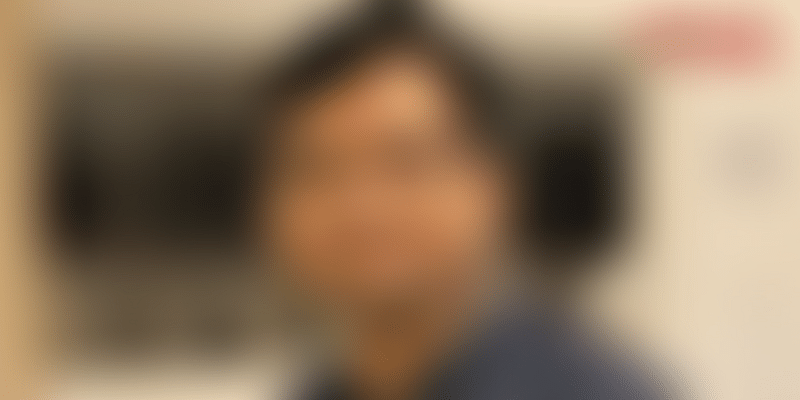 Recognising vulnerabilities of migrants from rural areas to urban India, Vinod started a ‘tea stall’ - Rozgar Dhaba – at Shehore district’s Nashrullaganj block in Madhya Pradesh. It not only sells tea and refreshments, but acts as a centre for exchange of information on livelihood/employment opportunities.

India, most say, runs on tea. No wonder then that the local tea stall is a regular haunt everywhere – be it rural India, or urban. Kadak, sweet tea, a break from the routine, and some much needed refreshments are items on offer. Thirty-five-year-old development professional Vinod Pandey wondered what if employment generation was added to the list?

Recognising the vulnerabilities of migrants from rural areas to urban India, Vinod started a ‘tea stall’ - Rozgar Dhaba – at Shehore district’s Nashrullaganj block in Madhya Pradesh. It not only sells tea and refreshments, but acts as a centre for exchange of information on livelihood/employment opportunities.

“I am from Bihar and have seen how people from Bihar migrate to different cities in search of jobs, especially for daily wage labour. An elder cousin migrated to Punjab and died because he did not get proper work in the city; he lived in slums, without proper healthcare. The city failed him,” Vinod says.

The then 12-year-old decided to help workers who would otherwise migrate to a city. While majoring in developmental studies, Vinod worked on several projects related to unemployment in India, especially Delhi.

This is where the idea of Rozgar Dhaba emerged. However, it took Vinod almost a decade to bring his idea to action. Interestingly, he fleshed out his idea when he travelled to Bengaluru. Stepping outside the airport, he was amazed to find a huge crowd outside the Chai Point stall, and realised the power of tea to bring people together.

“We were looking at a solution as something where there would be uncalled gathering from people of all class; a place where we could organise, in structured form, various information shared on different livelihood options,” he remembers.

“This is such an obvious truth that chai is a big social connector. Had I always been in India and not gone to study or work abroad, maybe it would not even have struck me. When you get outside you get perspective about your own land, about your own country, and your own city. It is very delightful for me to know that Vinod was inspired by Chai Point,” says Amuleek Singh Bijral, Founder and CEO of Chai Point.

Started in January 2018, Rozgar Dhaba caters to over a 1,000 people a month, hosting over 20 job fairs, and five farm produce sale displays. It has over 70 registered entities such as government agencies, skill centres, NGOs, the district agriculture centre, grameen centres, and small local businesses who provide regular job information. The dhaba itself provides employment to almost 10 people, with a revenue of Rs 8,000 to Rs 12,000.

According to a Centre for Monitoring Indian Economy (CMIE) report, 31 million Indians were unemployed as of February 2018, while employment opportunity and job creation was limited to 600,000.

According to the Socio-Economic Caste Census (SECC), 2011, nearly 833 million people migrate to urban centres in search of employment. Further, The Economic Survey of India 2017 estimates that the magnitude of inter-state migration in India was close to 9 million annually between 2011 and 2016, while Census 2011 pegs the total number of internal migrants in the country at a staggering 139 million. Uttar Pradesh and Bihar are the biggest source states, followed closely by Madhya Pradesh, Punjab, Rajasthan, Uttarakhand, Jammu and Kashmir, and West Bengal; the major destination states are Delhi, Maharashtra, Tamil Nadu, Gujarat, Andhra Pradesh, and Kerala.

Vinod saw migration to cities was not due to lack of jobs in rural India, but lack of information about the jobs available in nearby villages and towns. There is a huge demand for people to fill in roles for jobs like construction, painting, electrical work, plumbing, and masonry in villages. While there is an earning disparity between rural and urban India, Vinod says the benefits of staying in the village equal the wage difference.

“During community interaction, we realised people have no one-point contact to find information about job availability in rural India. People here neither have access to a naukri.com or angelist.com, nor are available jobs listed anywhere - a common information centre where both employers and employees can connect with,” Vinod explains.

Employers can access a list of candidates — with details about their skills and education—who are looking for jobs. The stall only charges for tea and snacks, while information is shared free of cost. Rozgar Dhaba also disseminates information on jobs/livelihood opportunities through Whatsapp, and earns from advertisements at the stalls.

“We just want to be sustainable. For us, progress would be measured on two things— number of people registered to seek jobs, and number of job opportunities people have access to,” he adds.

Presently bootstrapped, Vinod hopes to form a network of consumers through his tea stall, and act as a one-point contact for employment opportunities. “With more people coming in, the tea sales of Rozgar Dhaba will also increase, leading to increase in revenue.”

To attract women to the store, Rozgar Dhaba plans to recruit women and organise workshops in villages, specifically focusing on livelihood opportunities available for them.

There are two Rozgar Dhabas in Shehore district at present and Vinod aims to open 100 such dhabas — spread across Rajasthan, Madhya Pradesh, and Bihar — in the next five years. Any profits, he says, will be used for the development of villages.

While there are initiatives like the government soochna centre and ITC’s e-chaupal, Vinod says the information shared at Rogzar Dhaba goes beyond just agriculture.