‘For startups, selling ability is as critical as innovation’ – insights from Bangalore Business LitFest 2018 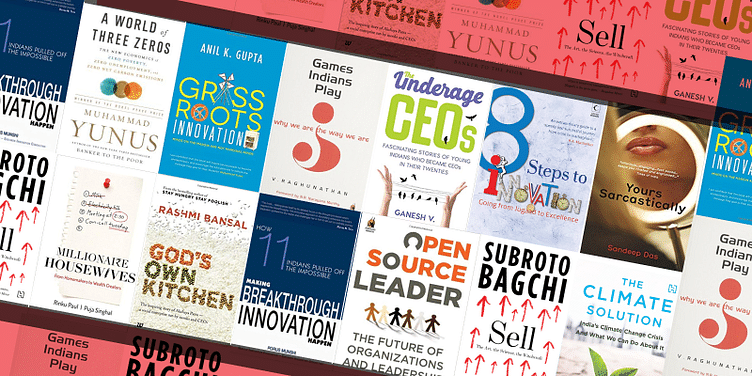 Founders, academics and corporate heads join us in Part II of our festival preview series (see Part I here). BBLF 2018 will also feature a business quiz, and a play by the Dramatics Club of IIM Bangalore.

Seizing opportunities at scale and overcoming fear of failure are important for India’s business future. “The exciting thing about Indian startups today is that more of them are tackling Indian problems. They have the potential to achieve high impact. It's also good to see more integration of hardware and software,” said Rishikesha Krishnan, Director of IIM Indore, and co-author of 8 Steps to Innovation.

“Innovation continues to be important to address the large number of basic challenges that we face. India has big problems, but limited resources –so innovation is the obvious solution,” he added.

One of the barriers to innovation is fear of failure, and bouncing back from mistakes. “Companies like 3M encourage stories about employees who tried, failed, but stayed on in the company and went on to achieve major innovation. These stories are critical to communicate that honest failure is accepted,” said Rishikesha. “Generally, in the past, we Indians were not open to accepting failure. That's changing, but far too slowly.”

“Indian startups are becoming more accepting of failure, particularly in the learning process of consumer-facing companies,” said Ankit Nagori, Co-Founder, CureFit, and former Business Head, Flipkart. For example. Flipkart admitted to making mistakes during its first Big Billion Day sale, but has, since then, learnt the lessons and overcome glitches.

The importance of selling

Ideation and product development are only the first part of innovation. “The only way you do business generation is by selling. For startups, selling ability is as critical as innovation,” said Subroto Bagchi, co-founder of MindTree. (See YourStory’s reviews of his bestselling books The Elephant Catchers and Sell).

“Everyone is a salesman. You sell yourself to your date, your child, and your boss,” joked Subroto. “You are selling, but probably you are doing so without knowing its process, rhythm, nuances and joy. Now, you could pick that up by training, observation and practice,” he explained. He regards Infosys’ Nandan Nilekani as “one of the greatest salesmen of all times.”

Good sales people have joyful inquisitiveness, positive thinking, research skills, and big-picture perspectives, said Subroto. “I had to sell to my co-founders the very idea of creating a non-existing enterprise that became MindTree; together we sold to the VCs to fund us, then we sold the dream to the first set of employees who came on board,” he recalled.

As favourite books, Subroto cited Amitav Ghosh’s Sea of Poppies, Richard Bach’s Jonathan Livingston Seagull, and Howard Gardner’s Five Minds for the Future. He also recommends What They Don’t Teach You at Harvard Business School by Mark McCormack, Emotional Intelligence by Daniel Goleman, and Theory U by Otto Scharmer.

The rise of purpose

In addition to startups with a tech and profit flavour, social entrepreneurship is also on the ascent in India. “What I see, though not enough of, is the rise of purpose. Value-conscious millennials are creating startups that solve problems which traditional businesses would not look at -- social problems,” observed Aarti Wig, CEO and Co-Founder, Yunus Social Business (YSB) India.

Sustainability is enabled by creating a strong narrative around existing examples, and creating an ecosystem of support (incubation and funding). “It is also interesting to see government awareness and support of social startups. YSB India signed a Statement of Intent with the Atal Innovation Mission to collaborate on bringing social business to the incubators they are activating across the country,” Aarti said.

The rise of purpose is also emerging in business literature. “I define business impact in terms of purpose. The purpose of business is to solve human problems through the creativity of the entrepreneur. Business has been defined for too long and too narrowly as simply driven by the desire to maximise profits and make lots of money,” Aarti explained.

There is a new narrative of the purpose of business emerging: social enterprise (for startups) and conscious capitalism (for large companies). “Form follows belief. Belief is created through powerful stories. We have been told the story that the entrepreneur is driven purely by greed. We need to tell a new story that entrepreneurs can be driven by purpose,” Aarti added.

As insightful books in this regard, she cited Creating a World of Three Zeros (by Muhammad Yunus – see our book review here), The Zero Marginal Cost Society (Jeremy Rifkin), and What Money Can’t Buy (Michael Sandel).

The future of the tech-disrupted workforce is a key discussion item at BBLF 2018. “Technology is making work more data-driven. Technology is also making some skills obsolete. The worker of tomorrow will need a higher level of IT usage skills than today,” observed Rishikesha.

“We are in the Infinity Era,” said Lalitesh Katragadda, creator of Google Maps India, and AI advisor to the Andhra Pradesh government. The notion of work, as defined in the Industrial Age, has completely shifted. “The future belongs to creative entrepreneurs, and this bodes well for the entrepreneurial community in India,” he said.

There will simultaneously be greater opportunities for leisure and the pursuit of pleasure and hobbies, as well as greater challenges to create a social safety net for those who need basic necessities, he predicted.

Lalitesh is also the founder of Indihood, a crowd-sourcing platform for social good. It aims to make it easier for Indians to use online open-source tools to find solutions and opportunities. He said Indihood is working, for example, on financial inclusion services for Avanti Finance, a platform promoted by Ratan Tata and Nandan Nilekani.

More and more Indian startups are investing in technology right at the early stages, so that they scale well, observed Ankit of CureFit. This has been a notable trend in the recent wave of Indian startups, particularly in the big companies founded by second-time entrepreneurs.

Aarti of YSB India explained that the vision of the purpose of work has to shape how we use technology. “The future of work narrative is a dystopian science fiction narrative: that the singularity is upon us and that the machines will replace human beings. But technology is merely a tool -- as effective as the use to which we put it,” she explained.

Smart connected medical devices can allow for less-skilled medical professionals in rural India to deliver basic diagnostics. “You will create, not destroy jobs. This is absolutely imperative in a country where we need to create 12 million jobs a year,” she added.

As tips for founders, Rishikesha advised choosing a problem that is real, and will have large impact if solved. “Use technology to provide a robust and scalable solution, not just for the sake of it. Spend as much time as possible listening to users, consumers, and partners,” he urged.

“Go deep in the areas where you have conviction. Have perseverance and persistence in the domain and problem you pick,” advised Ankit. “If this means you have to build multiple categories even at early stages, follow this path,” he added, drawing on his experience in tackling the multiple facets of a healthy lifestyle.

Remote collaboration and seamless flows of information are changing the nature of work, Ankit added. “There is less information asymmetry, and fewer barriers to access and knowledge than ever before, which will lead to more opportunity and better decision making,” he explained.

Some speakers also offered advice for aspiring writers. “Biographies and company histories would both benefit from some extra rigour. Academia should get involved with these,” urged Rishikesha. As insightful books, he cited Managing Radical Change by Sumatra Ghoshal and It Happened in India by Kishore Biyani.

Subroto Bagchi’s style of writing in his book Sell blends fiction, exotic locales and humour to deliver facts and tips about sales. “As a teen, I discovered I could write. It is a time of self-discovery. You discover you can write, like someone can sing or paint or play football. It is a very important thing because it, kind of, opens a combination lock,” he recalled.

In his corporate career, he would later write for magazines like Dataquest, and eventually penned his first book, The High Performance Entrepreneur. “When that book came out, I realised, my writing ability is a responsibility,” he said. Subroto decided to chronicle his business journey so that others could benefit from his experience. “What I write, must help someone else,” he said.

“Find your passion and time will find you. When you love something, time just shows up,” he advised aspiring writers. “Get someone unconnected to your writing to read your work. Don’t ask your dog to give you feedback on your writing. Ask your cat,” he joked.

"Write the way you would talk. That makes your work accessible. Often, we write to impress, not to inform. No one has time for such stuff,” Subroto signed off. “Read fiction. Only good fiction teaches us good writing. Be fascinated with things around people. Be inquisitive!”