Being inclusive is not a state, but a journey – Tina Vinod, ThoughtWorks 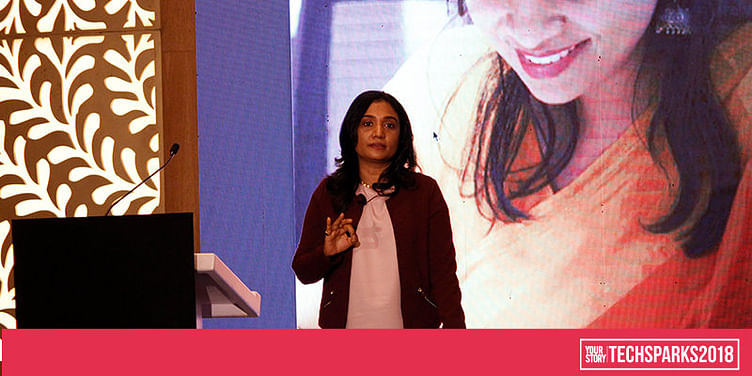 In a talk at TechSparks 2018, she said that she believes it’s important for every organisation to take inclusion seriously.

Gender diversity and inclusion are an important part of every organisation’s narrative. The benefits of gender diversity have become apparent over the years, and companies are working towards having an equal representation of men and women in their organisations.

Tina Vinod – Diversity and Inclusivity Lead at ThoughtWorks India, is a feminist who believes in the power of an inclusive organisational culture.

At the exclusive HerStory track at TechSparks 2018, Tina spoke about, “Harnessing diversity and building inclusive organisations,” which brought to the fore her passion for social change and inclusivity.

“India is a complex country and there are too many nuances to diversity and inclusion that we see on a day-to-day basis. These get interpreted very differently too,” she said.

Tina cited the The National Association of Software and Services Companies (Nasscom), an industry lobby group, which says that roughly 35 percent of the workforce in the Indian IT industry is women, making the sector one of the largest employers of women.

“Gender spectrum, however is beyond male and female and for those who belong to the formal sector, each organisation takes it seriously because they know it’s a business advantage,” she said.

She also threw light on the number of initiatives that ThoughtWorks that centred around gender diversity and inclusion.

“Through our Pathashala programme, we hire from colleges across India. And I have found that rural students outshine due to grit, hard work and determination. Here the retention is better than students from students from the cream of colleges,” she said.

“Our Vapasi programme is a structured technical programme to give women technologists a platform to redefine their (post break) career paths, connect and identify with role models, exchange experiences, and support each other in becoming active members of the tech community,” she added. The STEP – Software Technology Excellence Programme is again a two-year paid internship from the company.

Tina believes the LGBTQIA+ communities have had fewer opportunities in the workforce. “We have had representations where four of them have completed their internships, and they have joined ThoughtWorks as developers,” she said.

She concluded by saying: “Being inclusive is not a state, it’s a journey and it’s important to look at it holistically. Diversity is at that intersection between innovation and a successful business and doing the right thing.”