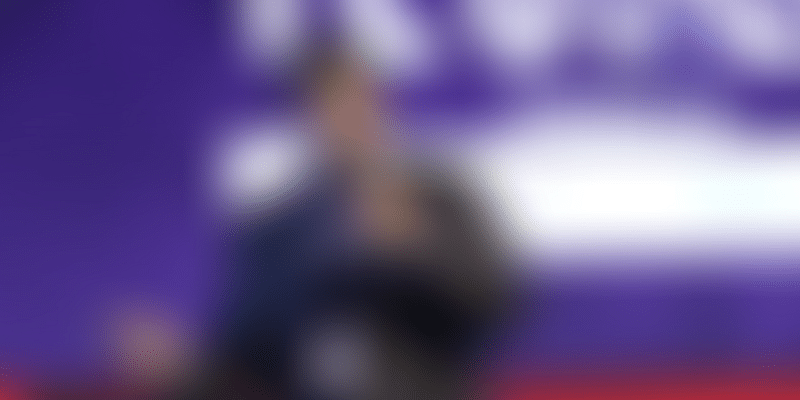 Founded in Feb 2017, Bengaluru-based GMETRI, which is on TechSparks 2018’s Tech 30 list, aims to tap this very market. The enterprise-grade platform helps create, deploy, and track AR/VR/MR solutions. The Co-founders, Utsav Mathur and Sahil Ahuja, were clear that they wanted to help enterprises create immersive training solutions for employees, and design retail solutions to give ecommerce a fillip.

Utsav, a trained architect, graduated from NIT Trichy and completed his master’s course in advanced architecture at IAAC, Barcelona. He specialises in computational design, robotics, digital fabrication, and augmented and virtual reality.

Sahil, an alumnus of NIT Trichy and IIM Calcutta, has more than 8 years of experience in building products and companies from the ground up, ranging from trading at BAML’s Treasury to software development in fintech at Goldman Sachs, and heading technology at SportsCafe.

Utsav and Sahil are childhood friends; their fathers used to be roommates once. After Utsav returned from Barcelona, he met Sagar (Sahil’s brother) for a drink; that’s when GMETRI was set into motion. Sahil came to pick up his brother and met Utsav after 15 years. Both of them ended up discussing various topics, including EU, Barcelona, machine learning, robotics, and virtual reality for three hours. The discussion continued the next day when they focused on the possibilities of VR-based solutions for the masses.

Two days later, they firmed up a plan to start up with VR-AR solutions. Utsav’s apartment doubled up as their first office in the next two-three weeks.

The duo faced difficulty in hiring talent initially, but overcame this by tapping their own and their friends’ networks. The team size now, including the two founders, is 10.

The founders call GMETRI a VR/AR/MR platform with “an authoring, deployment, and analytics toolkit that makes it extremely simple for enterprises to formulate, create and deploy immersive solutions”.

Utsav says, “The global VR market is around $300 billion. Apart from helping bring back product discovery to ecommerce, we also provide platforms to companies to train their workforce.”

The startup has signed up big retailers and e-tailers like BigBasket, Cafe Coffee Day, Airtel, Legrand, Bosch, and others. It currently has more than 25 clients in India and abroad, including Norway-based Model World and France-headquartered Legrand.

Utsav says, “Many companies witness attrition of around 40 percent QoQ. Our platform helps the companies to train their workforce faster. It helps them to cut the cost of training and doing business.”

The startup claims to have been making an operational profit since 10 months of its inception. It gets a licensing fee from companies using its software and platform. In the September ending quarter of FY19, it generated revenue of Rs 50 lakh.

GMETRI sees itself competing with Shopify as far as the ecommerce market is concerned. For the training market, it competes with Learnbrite.

The bootstrapped startup’s founders have together invested more than Rs 30 lakh into the firm. They are now looking for potential investors to scale up business.

While it plans 20-30 more integrations with retail players in the next year, the startup is aiming to hit $1 million annual recurring revenue in the training business in the same period.

“GMETRI is also expecting to get recurring revenue from the integration of its solutions at various retail stores and e-tailer’s platform,” Utsav says.