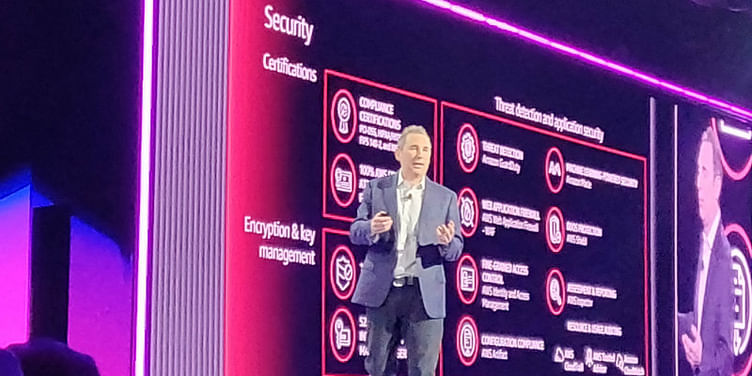 AWS CEO Andy Jassy chose the re:Invent2018 stage to hit back at Oracle's Larry Ellison, who last month said that AWS did not have enterprise-grade technology.

Kicking off his keynote session at AWS’ annual conference in Las Vegas, Andy took the fight to the competition by stating that AWS had 51.8 percent of the market share as compared to Microsoft’s 13.3 percent, Alibaba’s 4.6 percent, and Google’s 3.3 percent.

Referencing Oracle Chairman Larry Ellison, he said some people in the cloud business don't show up on the chart, they just “pop in”. “These old guard databases like Oracle and SQL servers are expensive and not customer-serving…people are sick of it, and now they have choice,” he said.

Andy then shifted gear to speak about what AWS had to offer. “We are all about the developer; we [get] that they want to build great applications with secure, cost-effective, and reliable infrastructure.” He said AWS was growing at 46 percent year on year, and was on its way to a $27 billion ARR in 2018.

He launched 22 new services (from storage and security to compute services, AI and Blockchain) for the developer community, stating that more large enterprises were moving to the cloud, which would be the fastest growing segment in the next few years. AWS is already working with the oil and gas industry, the automobile industry, and clients like Nasdaq and Netflix.

Across the world, clients like the University of Arizona and insurance company Guardian Life have moved majority of their workload to the cloud.

Dean Del Vechio , EVP and CIO of Guardian Life, a 158-year-old company, said he had to handle a lot of legacy systems – some in place from 1967 - when he joined the company five years ago.

“We realised that we had to scale in the modern world. So we trained our staff about the cloud and moved 80 percent of our workload there. We have 40 SaaS providers and over 200 applications on the cloud. Everything is on the AWS cloud,” he said. Dean added that they shut down their old data centre on November 5, 2018.

Even as corporates revealed how they were using data, AWS also announced two Blockchain services. But that wasn't without doing proper research. Andy and his team spent the first half of 2018 talking to customers and what they wanted to do with Blockchain.

“Our clients wanted a ledger technology with a centralised, trusted entity that is encrypted and cryptographically verified. They wanted this distributed ledger technology with trusted mechanisms in applications, including distribution, inventory management, peer-to-peer payments, supplier transactions, and process syndicated loans. So we decided to offer tools that can help Blockchain applications,” Andy said.

AWS’ new Blockchain products will help customers set up “a scalable Blockchain network with just a few clicks that automatically scales to meet the demands of thousands of applications running millions of transactions”.

Amazon Quantum Ledger Database : This is a fully managed ledger database that provides a transparent, immutable, and cryptographically verifiable transaction log ‎owned by a central trusted authority. Amazon QLDB tracks each and every application data change, and maintains a complete and verifiable history of changes over time.

Amazon Managed Blockchain: This is also a fully managed service that makes it easy to create and manage scalable Blockchain networks using the popular open source frameworks Hyperledger Fabric and Ethereum (will be available next year).

Dr Matt Wood, GM, Deep Learning and AI, launched the AWS DeepRacer, a 1/18th scale radio-controlled, four-wheel drive car, with its own racing league. Andy said the fully autonomous race car was designed to get customers to adopt “reinforcement learning”, one of the technologies used to make self-driving cars a reality.

AWS is planning to launch the AWS DeepRacer league, which it claims will be the world's first autonomous racing league. Twenty races will be held in 2019, and they will conclude in a championship cup to be held at re:Invent 2019.

What do builders want?

AWS' focus remains builders and the way they can help companies move from an on-premise world to the cloud.

“AWS believes developers were constrained by legacy technology in the last couple of decades and their ideas did not scale. Builders were creative; organisations demoralised them. They trained builders not to innovate or improve customer experience. Now, companies have realised it is about customer services; they need developers and their ideas to be implemented faster, and AWS can help them do this,” Andy said. He added that people come to work to innovate and think, “not to do the same thing over and over”.

The AWS CEO believes that builders or developers want to build right away. “So we offer them mobile services, IOT, and Blockchain. It is inexpensive to use these services on the cloud,” he said.

To see how AWS clients build on these tools, look no further than Motorsports Formula1, which is using machine learning and AI from AWS to track real-time performance metrics of F1 cars – every detail from tyre burnout to driving strategy can be broadcast to fans and teams.

F1 races are held in 21 counties and have countless fans. Every millisecond counts; you often have to change tyres in 1.6 seconds to win a race.

Ross Brawn, Formula 1 Managing Director of Motorsports, said it's a virtual war today with engineers building the best aerodynamic cars. He added that F1 has the most technologically advanced sports teams in the world. “We are a data-rich sport, and data fuels performance. We need AWS for scale, global presence, high performance computing, and machine learning to increase fan engagement. We use AI to analyse fluid dynamics and to track how a car is being driven. We analyse whether the driver is attacking or is in conservation mode. [This] allows teams to compete for the top prize.”

AWS is partnering with a multitude of companies to resolve specific problems. Pat Gelsinger, CEO of VMWare, announced a partnership with AWS for a hybrid cloud environment. “Corporations are going working on data centre consolidation and disaster recovery. Enterprises want data protection, storage, and management. They want to move workloads from on premise to cloud and back. This helps them innovate and scale faster,” Pat said.

Here's a list of the services and tools launched by AWS for developers and the engineering community: