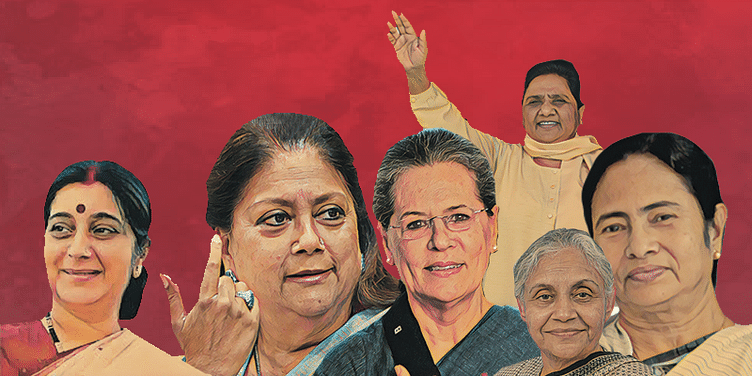 Throughout history, we have seen women politicians revered by many but scrutinised by many more. But prejudice could not silence all of them. Here are six women in Indian politics who took a stand and made sure their voices were heard, loud and clear.

Known as the 'Reluctant Politician', Italian born Sonia Gandhi came to India in 1968 after marrying Rajiv Gandhi. She led a life sans politics until her husband’s assassination in 1991.

When Sonia Gandhi was asked to lead the Indian National Congress, she initially refused, but eventually agreed to take on the mantle in 1998 after the party was left in shambles post the 1996 elections.

She quickly gained pace and became one of the most powerful women in India and the world. In 1999, Sonia Gandhi was elected Leader of the Opposition of the 13th Lok Sabha. In 2004, she became the chairperson of the National Advisory Council. However, she resigned from both these positions in 2006 following the office-of-profit controversy.

When Congress failed to acquire an absolute majority in the 2006 elections, it formed a coalition with 15 other parties - United Progressive Alliance (UPA). While Sonia Gandhi was asked to lead this, she chose economist Manmohan Singh instead. In 2010, she was re-elected as the chairperson of the National Advisory Council and served until 2014.

In December 2017, she retired as the president of Congress, passing the baton to her son Rahul Gandhi, but remains an active politician.

Vasundhara Raje was born in 1953 in Mumbai to parents belonging to opposing parties, making her path to politics quite uncertain. In 1972, she married into the royal family of Dholpur, Rajasthan, but separated from her husband a year later.

In 1984, she finally decided to start her political career and became a member of the National Executive of BJP. The next year, she was not only elected to the 8th Rajasthan Assembly from Dholpur but also became the vice-president of BJP’s Yuva Morcha.

From 1989, she won four consecutive Lok Sabha elections from Jhalawar. In 2003, she was chosen as the state's BJP president. Vasundhara Raje is currently the Chief Minister of Rajasthan - the first female chief minister of the state.

In June 2018, Vasundhara Raje received the ‘Chief Minister of the Year' award for her significant work in IT and e-governance.

Born to a Dalit family in 1956, Mayawati Das had no political influence in her family. In fact, she was inclined towards teaching and entering the police force.

Dalit politician Kanshi Ram recognised her talent for public speaking and persuaded her into joining politics. In 1984, Mayawati Das took her first official step by joining his Bahujan Samaj Party. In 1989, she contested and won in the 9th Lok Sabha General Elections from Bijnor. In 1994, she became a member of the Rajya Sabha.

In 1995, she created history by becoming Uttar Pradesh's first Dalit chief minister. Since then, Mayawati Das has been re-elected four times and her last term ended in March 2012.

During her last term, she started a project worth Rs 6,000 crore to build memorials of many Dalit icons. While her supporters were proud of this initiative, the Opposition criticised the humongous expenditure.

In 2001, Kanshi Ram made Mayawati Das his heir to the Bahujan Movement. In 2003, she became the National President of BSP due to his ill health.

After his death in 2006, Mayawati Das supervised his last rites. This could be perceived as BSP’s stand against gender bias, as only male relatives are allowed to perform last rites. She was also re-elected as the National President of BSP shortly after.

Currently, Mayawati Das is a member of the Rajya Sabha.

Sushma Swaraj was born in 1952 in Ambala, Haryana and began to engage with politics at an early age due to her father’s involvement in the RSS.

While pursuing law in the early 1970s, she joined the Akhil Bharatiya Vidyarthi Parishad (ABVP) - a student wing of the RSS. In 1974, she campaigned for Arun Jaitley contesting for the role of President of the DU Students Union.

Despite her familial and collegiate ties with the RSS, Sushma Swaraj was influenced by socialist ideas. Her beliefs were strengthened when she met Swaraj Kaushal, a renowned Supreme Court advocate, who she married later.

In 1974, she supported Jayaprakash Narayan's Bihar movement against the then central government led by Indira Gandhi. Following this, a 21-month-long Emergency was declared in 1975. Intending to boycott the government, Sushma Swaraj joined JP's movement, providing free legal aid to many activists.

After the Emergency was lifted in 1977, the Janata Party was formed. She became a member and garnered a lot of support from women and young voters. At the age of just 25, she became Janata Party’s youngest cabinet minister. She also became the president of the party's Haryana wing at 27.

She made history by becoming Delhi’s first female Chief Minister for 3 months in 1998. In 2009, she became the Leader of the Opposition replacing Lal Krishna Advani. From 2014, she has been serving as the Union Minister for External Affairs.

Today, she is popular among the youth, for many reasons including her active Twitter presence. Hundreds of Indians tweet to her every day, seeking her help to solve crises.

Sheila Dikshit was born in Punjab in 1938. Her late father-in-law Uma Shankar Dikshit was a well-known activist during India’s freedom struggle, and later went on to become a Union Minister and confidant of the Nehru-Gandhi government. Sheila Dikshit assisted him at this post and caught the attention of former Prime Minister Indira Gandhi.

She was then nominated as a delegate to the United Nations Commission on the Status of Women, where she represented India between 1984 and 1989. She eventually became Delhi’s longest serving Chief Minister.

Her feistiness led her to run a drive against the violence faced by women in 1990, that landed her and 82 colleagues in jail. In 2014, she was briefly appointed as the Governor of Kerala, but she resigned just five months later.

In 2008, she was awarded as the Best Chief Minister by Journalist Association of India, Politician of the Year in 2009 by NDTV, and in 2013 the Delhi Women of the Decade Achievers Awards by Assocham.

However, in 2008, she was accused of misusing funds sanctioned by the Central Government for personal use. In 2009, she faced a lot of criticism for granting parole to Manu Sharma, convicted for the murder of Jessica Lal.

Popularly known as didi, Mamata Banerjee is the current Chief Minister of West Bengal. She was born in 1955 in Kolkata. She had taken a vow to never get married and stands by it even today.

Her father was a Congress activist and she would accompany him to processions. While she was still in school, Mamata Banerjee joined the state’s Congress (I) Party.

In 1997, she separated from the Congress Party and established the All India Trinamool Congress which immediately became the primary Opposition party in West Bengal.

From 1999 to 2001, she joined BJP-led National Democratic Alliance (NDA) and served as India’s first female Union Cabinet Minister of Railways. However, after the Tehelka exposé of 2001, Mamata Banerjee quit the NDA, only returning in 2004.

In 2011, she was elected as the Chief Minister of West Bengal, making her the state’s first female Chief Minister. Through this, she also ended the 34-year rule of the Communist Party of India (Marxist). In 2016, she was re-elected for a second term.

In 2017, Mamata Banerjee was recognised by the United Nations for her Kanyashree initiative launched in 2011, which has helped to educate millions of girls in West Bengal.