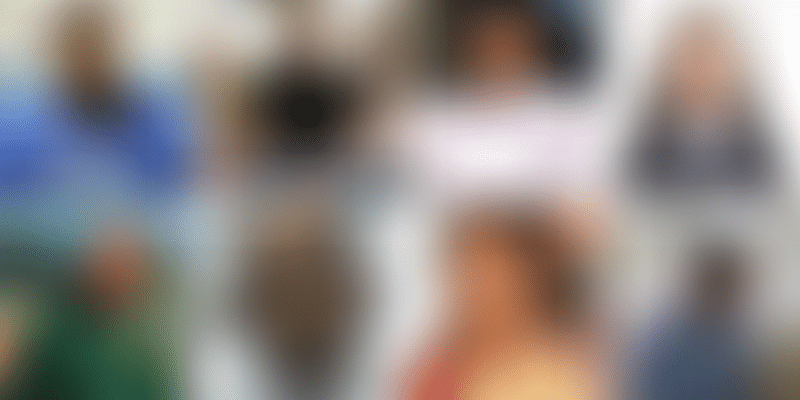 Meet these inspiring people whose stories of grit and gumption made us sit up and take note. They have braved all odds to dream and achieve big.

Don’t you get a warm, fuzzy feeling every time you hear of an underdog making it big? Many hard-working people who, despite their humble beginnings, have overcome all odds to chase their dreams and soar high. This is why rags-to-riches stories never fail to inspire us.

YourStory brings nine fabulous stories from India that will ignite your never-say-die spirit and inspire you to dream big and have the tenacity to chase that dream.

Ashok Khade's father was a cobbler. He worked under a tree in the bustling city of Mumbai.

Ashok was born in a village called Ped in Maharashtra's Sangli district. One of six children in the family, Ashok had to often go to sleep without a meal. Coming from the dalit community of Chamars, their traditional job was to skin dead animals. His mother had to work as an agricultural labourer in the farms of upper caste land owners. From social ostracisation to lack of opportunities, his family faced discrimination each step of the way.

Braving all odds, Ashok went to college and then worked at a government-run shipyard in the city. After acquiring the required skills in offshore maintenance and construction, he started his own company, DAS Offshore, which today employs 4,500 people and has an annual turnover of Rs 500 crore.

Kalpesh Patel was only five months old when he lost one of his legs to polio. Bedridden for several months, Kalpesh suffered from a prolonged fever as the deadly virus spread into his body. By the time he had fully recovered, the Surat boy had lost one of his limbs.

Undeterred, Kalpesh fought hard to make something of his life. Owing to his family's financial situation, Kalpesh couldn't study beyond Class XI, but he never stopped learning in life. He supported his father in the small diamond trading family business and started learning the tricks of the trade. Tragedy struck the family when Kalpesh’s father passed away when the boy was just 18 years old. Being the eldest among his siblings, the responsibility of taking care of the family fell on his young shoulders. This also ended his dreams of pursuing a higher education.

Kalpesh took over his father's business, and after some market research, ventured into trading diamonds. His clientele grew over time, as he cracked deals with several big jewellery companies from across the country. Today, his company has an annual turnover of Rs 10 crore. He is able to accomplish this with a team of just two people.

Sudeeksha Bhati, who belongs to a small village in UP’s Bulandshahr district, will head to Babson College, a private business school in Wellesley, Massachusetts, for a four-year undergraduate course.

The daughter of a tea seller, she has landed a full scholarship to one of the top colleges in the US. Sudeeksha will be the first person in her family to travel abroad for higher studies. But life wasn’t easy for the girl; the family used to struggle to make ends meet with her father’s meagre earnings. However, the student of humanities studied hard, focusing on the end result. Her hard work paid off and she ended up scoring 98 percent in her CBSE examinations.

Sudeeksha has been awarded a full scholarship of $70,428 per semester that is almost Rs 4 crore for a four-year undergraduate programme at Babson College. The B-school focuses on entrepreneurship education, and is often ranked as the most prestigious entrepreneurship college in the US.

Known for its Irani chai, Café Niloufer is a traditional cafe in Hyderabad. It started gaining popularity in 1976 when Babu Rao, who once worked as a cleaner at the place, took over its management.

Born in a small village in Telangana's Adilabad district, Babu Rao belonged to a poor family. During his schooling years in Maharashtra, he helped out at his uncle’s shop. Babu’s life was one of much struggle, and he had to even sleep on the Secunderabad railway station platform. He took up a few small jobs, and then decided to work at the cafe so that he could at least get a meal or two. Starting as a cleaner at the cafe, he was initially promoted to work as a waiter, and then to prepare the biscuits and tea. Moving up the ladder really fast, Babu Rao signed an agreement with the cafe to run it by the year 1978.

Initially, Babu Rao could only take the profits home but had to pay a fixed amount every month to the owners. However, he earned enough by the year 1993 to acquire the cafe, and has been running it since then. Known for its delicious tea, today the cafe is always filled with people who have been coming there for decades.

Son of an electrician, Mohammed Aamir Ali, a diploma student from Jamia Millia Islamia (JMI) Delhi, has walked away with an annual package of $100,000 (approximately Rs 70 lakh) from American company Frisson Motor Werks. The firm has assigned him the post of battery management system engineer at Charlotte in North Carolina. JMI said this is the highest salary package for any engineering diploma student at the college since its inception.

Mohammed could not get admission for an engineering course despite performing well in the JMI school board examination. After failing in his first attempt to get into the engineering course, he opted for a diploma in Mechanical Engineering at JMI in 2015.

Despite his failures, his passion for science and technology led him to work on electric vehicles. In one of the college fairs, he made a prototype of his research. Impressed by Mohammed’s idea, Professor Waqar Alam uploaded it in the university’s official website, which is when Frisson Motor Werks reached out to the college administration.

Daughter of a vegetable vendor, Shakila Sheikh lives in a simple house 30 kilometres from Kolkata. She owns a private studio where she works as an artist. Famous across the globe for her collage art, she is also a homemaker. Her art adorns the walls of houses across India, the US, and Europe. Shakila earned Rs 70,000 in 1990 when she hosted her first ever exhibition. Today, she makes much, much more, and has a team that takes care of her sales.

However, during the years growing up, she had a troubled childhood. Her father abandoned her family when she was just a year old. This forced her mother, Zehran Bibi, to travel 40 km, from Mograghat to Taltala market, every day to work. As it was difficult for Shakila to travel every day to school from her village Mograghat, she quit her studies. At the age of 12, she got married to Akbar Sheikh, who was 15 years older and already married. Due to financial difficulties, Shakila approached BR Panesar, a retired government employee and artist, for help and he suggested she make thongas--paper bags--to support her husband.

Inspired by his art, Shakila started working on her first collage, a depiction of vegetables and fruits that left everyone stunned. In 1991, she displayed her collage at an exhibition for the first time.

In 2010, Rani Rampal was a teenager when she made it to the Indian hockey team. Eight years later, she is leading the brigade of 16 players as team captain for the upcoming World Cup in London. At the age of 23, she is already a veteran - she has scored 134 goals in 212 international appearances. For someone whose father worked as a cart-puller, Rani's journey is an inspiration for millions across the country.

Hailing from a small town in Shahabad, about 120 miles north of Delhi, Rani lives with her parents, her two brothers, and their wives and children. It took Rani three years to explain to her parents her love for hockey, who were apprehensive about what the society will think. Rani got support from her coach, Baldev Singh, who not only worked with her but also stood by her through thick and thin. Her success has helped her gift her family a new house.

Santosh Sharma did a series of jobs before landing a high-paying one with Air India in 2007. He worked as the assistant manager of its Kolkata branch for a few years before a chance encounter with APJ Abdul Kalam. That meeting with the former president of India set Santosh on an entrepreneurial journey and he started a dairy farm with just eight cattle. M'ma Organic Farms was started in 2014, and within a short span of time, he has earned Rs 2 crore in revenue.

Santosh was born in Jharkhand's Jamshedpur in a family with limited means. That made him want to work hard to achieve great heights and, at the same time, he was also passionate about giving back to society. That is why after working for a few years, he started studying for civil service examinations. However, he quit studying eventually and got back to working for multinational companies.

Arjun Solanki was 14 years old when his father passed away. His mother's income was not enough to feed her two sons, so they both dropped out of school to start working as well. Apart from ensuring that there was enough food to eat three times a day, the trio had no energy or the luxury to dream of anything else. But everything changed for the better when Arjun, the younger of the two sons, heard about a free skill training course provided by ICICI.

Though it would be difficult for the family to survive without his income for two whole months, they supported and urged him to take up the course. Initially, the faculty providing training were skeptical if he would even attend the class continuously. But he surprised them by completing the course successfully. Additionally, he also started reaching heights at his job very soon. Arjun Solanki now undertakes projects worth many lakhs as a contractor (for painting). Along with taking care of his family, he uses the money he earns to help young boys in his village.