These IIIT graduates have built a camera that captures 360-degree, 3D videos in real time 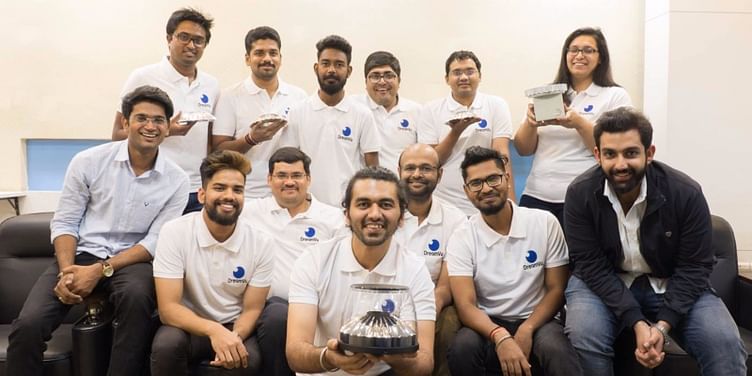 Like every engineer who loves building products and technology from scratch, IIIT-Hyderabad graduates Rajat Aggarwal and Rohan Bhatial would tinker and work on different products at the lab. It was then that they thought of building a camera that made live streaming of 360-degree, 3D videos affordable and accessible. And that is how DreamVu was founded in 2017.

These cameras usually have two or more lenses, and each lens has a separate image sensor. This helps simulate the human binocular vision. These cameras are used primarily in robotics and automation, where the progress can easily be monitored.

What does the camera do?

“We use an optics-first approach to make power, cost, and computation-efficient 360-degree 3D cameras for both autonomous machines that work on their own and also for capturing human viewable content,” Rohan says.

The growing focus and push towards autonomous machines in different sectors like vehicles, healthcare, security, and services mean this will be a strong decade for 360-degree 3D videos in real time, the DreamVu team feels.

DreamVu’s product is a single sensor-based, 360-degree camera with depth sensing. The hardware comes with a software development kit (SDK). It is a USB 3.0 powered platform, which gives a live output to the robot. DreamVu is incubated at CIE-Hyderabad.

“It is compatible with ROS, OpenCV, and other popular platforms. The output can be used in applications like SLAM, Navigation, Identification/Detection, and Collision Avoidance. We are selling our development kit as one-off units worldwide and are also exploring B2B pilots with bigger players in this industry,” Rajat explains.

He says the core idea of the technology was to make capturing and live streaming of 360-3D videos affordable and accessible. Explaining why they decided to get into this space, Rajat says, “The cameras that were available in the market were bulky, extremely expensive, and required a lot of time and computation to give results. It involved an intricate calibration and stitching process. I started working on this as a research problem, with the help of Professor Anoop Namboodiri.”

The professor is now a co-founder and the Chief Scientific Officer at DreamVu.

A coffee filter to the rescue

The student and professor explored the field of computational photography for a viable solution. They came up with multiple ideas and designs to capture 360-degree, 3D views.

“We came up with the design of a mirror, which resembles the shape of a coffee filter. This proved efficient capture views without any occlusion. After a lot of manufacturing and calibration challenges, the first prototype was developed near the end of 2015. The was publicly showcased in June 2016 in CVPR, a paper by Computer Vision Foundation where this research was published,” Rajat says.

In 2016, the duo worked on perfecting the product, after initial market research. In January 2017, they were selected for the Aavishkar accelerator programme from CIE, IIIT Hyderabad. In March, they registered DreamVu Inc. in the US as a Delaware C-Corporation.

“We used the money from Aavishkar to hire a set of interns and build the first set of prototypes. Being a hardware startup, we needed a wide array of skill sets in the company, which was a challenge,” Rohan says.

As their target market was the US, the duo spent the last quarter of 2017 in the Silicon Valley, talking to clients and investors and attending a lot of events where they showcased their product.

They raised an undisclosed angel round, which was used to hire a team of computer vision engineers, researchers, software engineers, and market research interns in the first quarter of last year. Currently, the DreamVu team comprises 20 people.

“We worked on making better demos/prototypes, and were also talking to early adopters in the autonomous robots/drones, ADAS/self-driving, and VR/AR spaces,” Rohan says.

The aim was to collect enough market data to build a robust go-to-market strategy, which in turn helps the ease to enter. This remains one of the biggest challenges.

The core challenge remained raising funding, but in October last year, they closed an undisclosed funding from SRI Capital. The capital raised will primarily be used to take the product to market.

Jay Krishnan, Partner at SRI Capital, says, “DreamVu's solution with an optics-first approach that allows sensors and optics to disrupt value chains long powered by electronics and software is unique. DreamVu is well positioned to transform the autonomous guided space with its product portfolio and stellar backing through its advisers, investors, and the operating team.”

DreamVu's 360-degree depth sensor is in pre-revenue stages and is priced between $500-$1000 per unit at production. “As we are positioning ourselves as an OEM provider to manufacturers of autonomous guided vehicles/ system integrators, the cost might vary depending upon integration processes and specification requirements,” Rohan says.

They are now working with optics companies to find the best processes for their customised optics. It is aiming for production in small numbers in the next quarter to lock in the process.

“We also have our in-house assembling process, which will be done before the camera is shipped,” Rohan says.

DreamVu is in talks with system integrators of Automated Guided Vehicles (AGVs) globally to integrate their product with their current systems. They aim to initiate two to three pilots by the second quarter of 2019.

The startup is also shipping some development kits, which includes the camera and SDK, to some early adopters for product feedback and use case exploration.

Artificial Intelligence, machine learning, and IoT seem to be the buzzwords in today’s startup world. Gartner Inc. forecast that by 2020, the would would have 20.8 billion connected devices. Apart from biggies like Google and Uber entering the self-drive and connected cars space, several Indian startups such as Raksha SafeDrive are focusing on road safety using an IoT device.

DreamVu can work with any of these companies, but the founders’ long-term vision is to disrupt the camera segment.

“Our core technology has the potential for wide-scale adaptability in various verticals. Due to size and design adaptability, we can enter almost every market where cameras are being used and replace them with more efficient ones. Like medtech, security and surveillance, and mobile lens etc. With over 100 million autonomous machines expected globally by 2025, we are looking at a multibillion-dollar opportunity for DreamVu,” Rajat says.