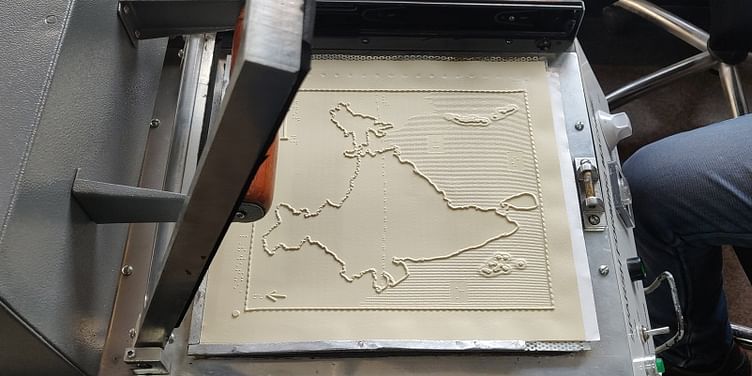 Raised Lines Foundation (RLF) at IIT Delhi has developed a technology that uses 3D printing to produce high-quality yet affordable tactile diagrams on a large scale for books and other printables in Braille. The potential impact for empowering the visually impaired is huge.

Can you imagine a biology class without diagrams? Or learning science, technology, engineering, and mathematics (STEM) subjects without graphs and drawings? Blind and visually impaired students often have to forego these subjects because of the challenge involved in learning these concepts and processes without the ability to see.

A typical textbook made available to visually impaired students in India typically consists of only text in the form of Braille. Diagrams and pictures are removed. As a result, blind students are obligated to study subjects that are theory-based, “thus almost completely eliminating opportunities for them in most of the new age jobs,” says Piyush Channana, a PhD student at IIT Delhi.

To enable such students to study science and allied subjects, 36-year-old Piyush and his team set up the Raised Lines foundation (RLF), a social welfare (Section-8) company, at IIT Delhi in July 2018.

RLF has developed a technology for producing high-quality, affordable, and most importantly, tactile diagrams that can be understood by the blind, using 3-D printing. Tactile diagrams are images that consist of raised lines and textures that can be used by the visually impaired to understand the graphical information using their sense of touch. The technology helps creates moulds and allows thermoforming, which is needed to produce these tactile diagrams.

While the concept of tactile diagrams has been around for a while abroad, RLF is working the Indian education system to incorporate simplified tactile diagrams in textbooks for the visually impaired. If successful, it could open up vast areas of education that have been off limits to blind students.

RLF is a spin-off of Assistech Labs, an interdisciplinary group of faculty, research staff, and students at IIT Delhi. The team uses technology to find affordable solutions for the visually impaired. Sometime in 2013, the group developed the SmartCane, an aid to help the visually impaired move around independently and safely.

Ironically, the biggest problem it faced was trying to explain how the SmartCane worked to those who were supposed to use it. First, the team thought that if there was a diagram, they would be able to understand it. But how do you draw a diagram that could not be seen? It had to be felt, that is, it had to be tactile. The first tactile diagram they created was made of lentils!

The next step was to put the diagram into the SmartCane manual. But since the first diagram was handmade, the challenge was to create it at scale. And so the research continued. That’s when they realised that the problem of representing a visual to the visually impaired ran much deeper.

“We realised that blind students were leaving subjects like science and mathematics after school because the Braille books come without diagrams, and everything is dependent on the effort of the teacher,” Piyush explains.

The implications of losing a pool of potential talent are huge. Consider the numbers. According to the World Health Organisation (WHO), an estimated 285 million people worldwide are visually impaired, among which nearly 39 million are blind. The 2011 census data by the government shows that India has more than five million visually impaired people, the largest in any country.

“A very significant portion of this population is children in the age group of five to 19,” says Piyush, which means that the potential for impact is huge.

How do tactile diagrams help?

Pictures and graphics play a critical role in education right from the beginning. “Alphabets are taught through picture books where the sounds associated with the pictures (e.g. A for Apple with a picture of an apple) reinforce the learning. Similarly, numbers are introduced using picture books where a number of different common items is shown to reinforce counting (e.g. three is shown with a picture of three balls),” says Piyush.

As we progress in school, the role of graphics becomes more important. “Chemical structures and equations, mathematical (geometry graphs, charts) diagrams, illustrations of physical processes as well as parts of plants and animals, structure, concepts of physics, and geographical maps, etc. are almost always taught to sighted children using pictures and graphics,” he adds.

“This is essentially why RLF was incubated at IIT Delhi. The goal is to provide textbooks in an accessible format along with the tactile diagrams to every student with visual impairment and empower them to choose subjects by choice and not compulsion.”

This inspired the team at IIT Delhi to do this on a bigger scale and solve the problem. Initially, the team worked closely with blind people, organisations for visually impaired, special teachers, and several other stakeholders to come out with an easy, scalable, and automated solution.

The team also had multiple versions with different kind of sheets and tools, but the best results were produced by 3D printers, which would print customised diagrams for visually impaired persons, says Piyush.

“Many organisations working in the field use services of special educators to produce customised tactile diagrams for their own small number of clients. This is neither scalable nor conducive for quality production. On the other hand, neither the publishers nor agencies like Braille Press have access to professional tactile designers,” says Piyush.

In just six months of its launch, the 12-member team at RLF has made this solution scalable and produced 2,000 tactile supplement books. It can also produce about 500 books per month in-house.

It has produced more than 70,000 tactile copies of 1,000 unique diagrams in maths, science, geography, and economics books for Classes six to 12. RFL has also created manuals on menstrual hygiene management and has added diagrams in the book, 'Yogikasparsh - Resource for Teaching Yoga Asanas' for yoga postures.

The company has also started receiving independent orders like sitemaps from art galleries, and for training manuals, etc. through its website, apart from direct orders from organisations. “Our focus now is on the market penetration, business development, and diversification,” says Piyush. Training manuals for computers, smartphones, musical instruments, building layouts, and floor plans are all in the works.

The flow of capital

The project was undertaken as the Centre of Excellence in Tactile Graphics (CoETG) in 2015 and later renamed Raised Lines Foundation. CoETG was first supported for three years by Ministry of Electronics & Information Technology (MeitY), Government of India, through which it developed the complete know-how of designing and producing tactile diagrams. MeitY has extended support for another two years.

Funding is a community effort. RLF has received support from bodies like NCERT, state education boards, the Sarva Shiksha Abhiyan (MHRD), WSSCC (Water Supply and Sanitation Collaborative Council), and other organisations working for blind people. While this may sound impressive, it is just the beginning. To fulfill this vast need for textbooks, RFL needs to scale up at a very high pace.

“Being a not-for-profit, we are looking at a mix of public financing and CSR funding to support us in producing and disseminating these books,” says Piyush.

In the next three years, RFL aims to reach more than 200 organisations working for the blind, including schools and training institutions, and deliver more than 25,000 tactile books across the country. Besides designing 50+ books, including textbooks in multiple languages, training modules, and other books, it also wants to supply the books to clients outside India.