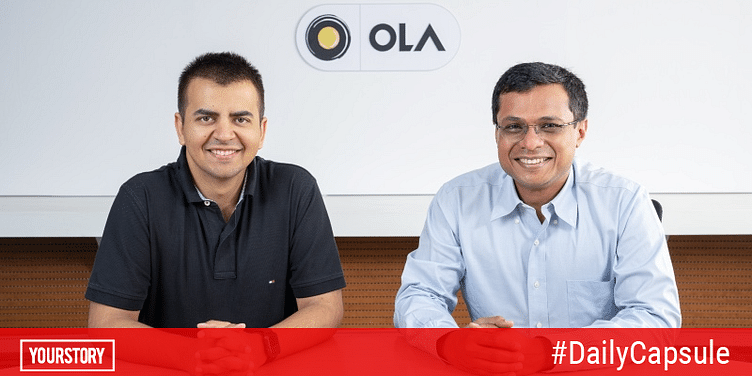 Good news startups! The government has finally provided relief on Angel Tax. After much discussion, the Ministry of Commerce cleared a proposal providing exemptions for startups on Angel Tax. Investments in startups recognised by the DPIIT by listed companies with a net worth of Rs 100 crore or turnover of Rs 250 crore will be exempt under Section 56 (2) (viib) of Income Tax Act up to Rs 25 crore. Also investments up to Rs 25 crore in eligible startups by Non-Residents, and Alternate Investment Funds - Category I will also be exempt.

Bengaluru-based ride-hailing platform Ola has raised Rs 650 crore in funding from Sachin Bansal, Co-founder of Flipkart. The funding is part of Ola's larger $2 billion fundraise, which it had confirmed in January this year. With this fundraise, Bhavish Aggarwal, Co-founder and CEO of Ola, said the company will be building the reach of electric vehicles, expanding and growing Foodpanda, and bringing in a stronger focus on international markets.

Bike rental company Royal Brothers raised $1 million in a Pre-Series A round led by Pradeep Deviah, Chairman and CEO of PDA Trade Fairs, Angel Investor Amrith Prasad, and others. The startup, which claims to be South India’s first licenced bike rental company, said the round included primary and secondary share purchase. Royal Brothers will deploy the funds to build the market for bike rentals, and expand to five more states, including 10 new cities over the next six months.

SME financing platform Ziploan has raised Rs 90 crore in a Series B financing round led by SAIF Partners. The round also saw participation from existing investors Matrix Partners India, Waterbridge Ventures and Whiteboard Capital. Started in 2015, Ziploan has raised a total of Rs 320 crore in equity and debt funding till date and plans to mobilise additional Rs 250 crore more from debt investors. The company is currently operational in NCR, Mumbai, Indore, Lucknow, Dehradun and Jaipur.

French security researcher Robert Baptiste, who goes by Elliot Alderson on Twitter, exposed a massive data Aadhar data breach through the Indane Gas website. He claimed the LPG brand owned by Indian Oil Corporation (IOC) had reportedly leaked millions of Aadhaar numbers of dealers, distributors and customers. However, in an official statement, Indian Oil denied any data breach saying, "Indian Oil in its software captures only the Aadhaar number which is required for LPG subsidy transfer. No other Aadhar related details are captured by Indian Oil.”

With changing times, India’s internet population has changed, both in terms of demography and geography. The finding is based on InMobi’s flagship study, ‘The Changing Face of the Indian Mobile User’, which found that the above-25 population on the Indian web has grown from 40 percent in 2013 to 54 percent in 2018. Penetration of mobile has increased too, with rural and semi-urban audiences constituting 40-50 percent of the user base, up from 29 percent five years ago.

San Francisco-based Propel Venture Partners started its India venture story with fintech player Groww. Recently, Rohit Bodas, Head of Propel’s international fund, spoke to YourStory and shed light on why India is a key market and what he looks for in a startup while investing. “A great founding team targeting a large market opportunity is a given,” he said, adding, “We

also look for proof of efficient customer acquisition and some early evidence of momentum.”