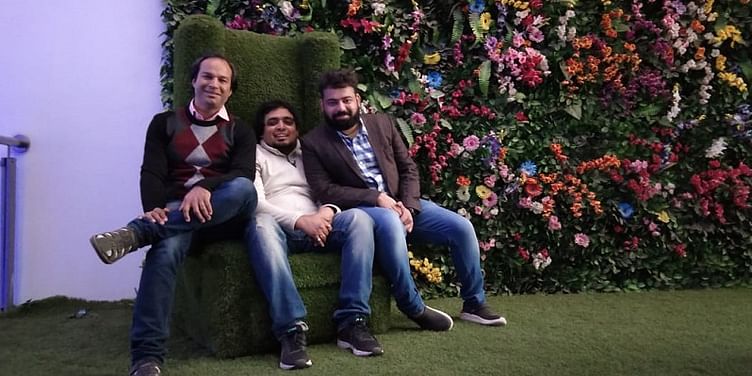 Four-year-old Nodia-based startup AHA Taxis, which claims to be present in over 4,500 cities across India, sold a majority stake to EbixCash last year.

AHA Taxis was started by three friends Shivam Mishra, Amit Grover, and Kunal Krishna. The founders say they started up after personally experiencing problems travelling by taxis from one city to another as they were being doubly charged for one-way travel.

Launched in April 2015, Noida-based AHA Taxis is a one-way cab service provider for outstation purposes across India. The company follows something similar to an aggregation model,with vendors networking in more than 1,000 cities, and claims to have over 15,000 vendor networks at present. It has tied up with vendors having multiple cabs as well as with those who owns and drives their cabs.

And as they company scaled, AHA Taxis sold 70 percent to EbixCash last year. EbixCash is a subsidiary of Ebix Inc, an international supplier of on-demand software and ecommerce services to the insurance, financial, healthcare, and e-learning industries.

Speaking about selling a majority stake to Ebix, Amit said:

“We have been a startup that has grown approximately 100 times since January 2015. We grew AHA on minimal seed capital, and broke-even in 2018. We needed the physical and digital client and franchisee expanse of a massive network like EbixCash to substantially grow our business.”

Commenting about the acquisition, Robin Raina, Chairman, President and CEO, Ebix, said, “AHA Taxis provides our Via and Mercury travel brands with another in-house tool to cross-sell cab services to our corporates, B2C clients, and OTA clients. We were already using AHA as one of the outside vendors to whom we would handover inter-city cab travel, because of the efficiency and pricing provided by AHA.”

Currently, AHA Taxis is a 50-member team, and claims to be present in over 4,500 cities across India, serving over one lakh routes.

“Our over 260,000 strong franchise network will now be able to not only sell cab travel as an integral tool through online cloud-based technology, but will also be able to register new car drivers to the AHA network across the country and convert it into one of the largest inter-city cab networks in the country,” Robin added.

With Ebix acquiring a majority stake in the company, the AHA Taxis team now aims to take its services to Tier II and III cities across the country.

Kunal explains, “Our domain knowledge and technology has helped us solve the several decades problem plaguing the taxi travel space in the country. With Ebix, we intend to take AHA offerings to every Tier II, Tier III city in the country, and help millions of people save their money on travel. AHA’s technology does not only solve the problem for India, but in-fact can also be extended to other South Asian countries.”

Also read: After Uber and Ola, these cab aggregators are gearing up for the online rental space race

Riding over Ola and Uber

AHA Taxis considers its cost and availability of cabs as its main USP. The outstation taxi service provider’s average ticket size is Rs 2,500, and its per km price comes down to an average of Rs 9-10, including the surcharge, toll-tax, and other charges.

Commenting on its pricing, Shivam says:

“Price is the most sensitive thing Indian customers look out for.Our prices, when compared to Ola/Uber, are almost 40 percent less on top outstation routes, and are usually a planned travel.”

On the other hand, the Ebix group owns many travel properties and has a huge network of franchise shops across India. It owns Mercury Travels, Via.com, Sastiticket.com, Lawson travels, and has a huge offline network.

Apart from the online taxi players such as Uber and Ola, AHA Taxis faces competition from offline cab aggregators as well.

“In our industry,the offline business is huge, and there are a lot of travel agents operating in this space. When EbixCash was acquiring us, it was a strategic decision. It had close to 2,60,000 physical franchise shop across India. Ebix group companies in travel did not have any taxi company, and after AHA joined them, Ebix is a full-fledge travel and transport company,” adds Shivam.

Some of its other competitors include GozoCabs and ibiboRyde.

The AHA Taxis app, which is available on both iOS and Android, lets users add the pickup and drop location, along with their name and mobile number. The journey details will be received by the user at least two hours before the travel time. A unique feature the company offers is that a user can also schedule a ride up to six months in advance.

According to the founders, for safety purposes, a vendor gets a dashboard in the app where they can upload all the documents related to the cars, drivers, and other police verification documents. It is then checked and verified by the AHA Taxis team internally.

The market and revenue model

The company has partnered with websites including MakeMyTrip, yatra.com, Railyatri, Goomo, Jugnoo, buyforex.com, EaseMyTrip, and Skyscanner. Shivam says, 50-60 percent traction comes from these websites, and 40 percent from the AHA Taxis website.

And when it comes to payment, the app gives two options to its users. A user can either pay the entire amount in advance or can pay 15 percent on booking the taxi, and the rest will have to be paid to the driver by cash after completing the trip.In both the cases, AHA Taxis takes a 10-15 percent margin, and the rest goes to the driver.

According to the company, it clocked $3 million in revenues in March 2019, and aims to close at around $4 million in the coming financial year.

Before selling a majority stake to Ebix, the company had raised undisclosed amounts in two funding rounds–a seed round by Ah! Ventures in 2015, and a pre-series A round from Lead Angels Network and AHA Ventures.

In future, AHA Taxis aims to expand to Indonesia and the Philippines.

“After the acquisition, we are now growing as a full-service passenger transportation company providing airport transfers, railway transfers, employee commute, package tours, corporate travel, and outstation taxis. We are now growing ourselves as a one stop solution for everyone when they think of taxi travel in India,” says Shivam.

The team will also be launching ‘AHA escapes’, targeting those who want to escape from their day-to-day work, and want to travel to nearby places for relaxation.

Also read: Ola, Mahindra, Bounce: meet the companies lighting up the road for electric vehicles to go the distance